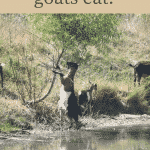 Many new or aspiring goat owners ask what goats eat and expect a short, simple answers. Some just expect you to say, “Everything!” because they even eat tin cans, right? Um, no, they don’t eat tin cans. And they don’t eat everything. Compared to cows, goats actually have a fairly sensitive digestive system, so it’s fairly easy to create a problem.

The answer to the question depends on gender, age, stress, health, pregnancy, and milking status. In general, goats are browsers, which means they prefer to eat small trees and bushes. They are not naturally grazers, but they will eat grass, if there isn’t anything else growing in their pasture.

Goats never lived in the wild in North America, and we don’t have what they need to thrive in most areas. (So-called mountain goats are actually members of the antelope family.) Goats originally came from mountains and deserts in Africa, Asia, and Europe. That means we must pay special attention to their diet. It’s not as simple as sheep and cows, which are grazers. In addition to everything listed below, all goats need 24/7 access to a high quality loose goat mineral.

Click to get our “cheat sheet” on what goats eat!

What do male goats eat?

As a rule, bucks and wethers (castrated males) should not have grain because it can cause urinary stones. (Goat “feeds” are made of grain.) During breeding season, however, some bucks may lose quite a bit of weight because they are fighting with each other, breeding does, and not taking the time to eat much. If you have a buck that’s losing a lot of weight, you can give him some goat feed for a short time to get him back into condition. You should not feed individual or mixed grains, such as corn, oats, barley, etc because they are high in fat and carbohydrates and low in protein, so they are not that nutritious.

When you feed any type of grain (goat feed) to bucks, you need to provide baking soda free choice so that he can self medicate if the grain upsets his rumen — especially when you first start feeding him the supplemental grain, which should be introduced gradually.

It’s also a good idea to get a goat feed for male goats that has ammonium chloride in it to prevent the formation of urinary stones. Bucks and wethers have such a small urethra that even the tiniest stone can cause a blockage and kill them. According to Sheep, Goat, and Cervid Medicine (2021), struvite (magnesium ammonium phosphate) and apatite (calcium phosphate)  are commonly seen in goats fed high-grain diets.

Wethers are especially easy keepers, and it’s easy to kill them with kindness. Since they are not growing babies or producing milk or sperm, they have a pretty easy life. They do well on pasture, browse, and a good grass hay after they have reached about 50% of their adult weight, which usually happens between 6 and 12 months of age. These ages are just a guideline. Size is the most important factor as some goats can be small for their age if they had a serious parasite challenge as a young kid. On the flip side, they can grow much faster if they mother was a bucket busting milker.

Alfalfa is too rich for male goats after 6 to 12 months when their growth rate slows down, and it can lead to a zinc deficiency because of the high calcium content. Calcium is a zinc antagonist, which means that it can bind with the zinc making it unavailable for the goat to absorb, even if the goat is consuming enough zinc.

What do female goats eat?

The answer to this depends on whether does are pregnant, milking, or dry, meaning not milking. Dry does are fed very similarly to bucks and wethers after they are about 6 to 12 months old and have done most of their really fast growing. Again, size is more important than age, and that can vary tremendously from goat to goat. They don’t usually need goat feed after they’ve reached about 50% of their adult weight, although if you plan to breed them, you can feed them alfalfa hay rather than grass hay.

When does are in milk they need grain in the form of a 16% protein commercial goat feed, which will have additional vitamins and minerals added. It is not a good idea to feed something like corn, which is high in fat and carbohydrates with very low protein.

As with bucks, if female goats are eating grain, they should also have baking soda available in case of an occasional rumen upset. Please do not add baking soda to their grain. (That would be like us eating Tums with every meal.) If they never touch the baking soda, that’s great.

Milkers also need alfalfa hay, which is high in protein and calcium.

Many does are milking the first three months of pregnancy, which means they are eating grain and alfalfa hay. You should stop milking about two months before the due date so that all of the doe’s energy can go towards growing the babies. Although you don’t need to continue feeding grain during pregnancy, you should continue feeding alfalfa. At least 50 percent of the pregnant goat’s hay should be alfalfa (or another legume such as peanut hay) because she needs the high calcium for growing babies. If you have access to 100 percent alfalfa, it’s fine to feed that.

The closer you get to the end of pregnancy, the faster the kids are growing, so if you are not feeding 100% alfalfa hay, then you should feed a small amount of grain to boost the protein content of the doe’s diet.

Some people who are familiar with cattle will warn you against feeding 100 percent alfalfa to your goats because research in cows has linked a diet high in alfalfa to hypocalcemia, but that is not the case in goats. Hypocalcemia happens most often in goats towards the end of pregnancy because they are growing multiple fetuses, whereas it happens in cows after freshening because of their extremely high milk production.

Check out my interview with Dr. Robert VanSaun, a vet professor and ruminant nutritionist at Pennsylvania State University, about hypocalcemia in goats and how it is different from cows.

What do baby goats eat?

When baby goats are dam raised, meaning raised by mom, they will imitate her and start to nibble on grain and hay within a few days of birth. They are not getting a substantial amount of  nutrients from the solids though. The vast majority of their nutrition will come from their mother’s milk for the first two months at least. In addition to a lot of protein and calcium, which they need for rapid growth, they also get antibodies from the mom that help to keep them healthy as their own immune system matures. Because of the nature of the goat placenta, there is not as much transfer of antibodies at birth as there is with other mammals, such as humans.

If a baby goat has been nursing on mom, it should never be sold to a new goat owner unless it has been completely trained to take a bottle, which will take several days. I have received a frustrating number of emails from people who’ve been sold kids as young as three weeks old and told that they’re eating now so don’t need milk any longer or that they’ll take a bottle if they want it. Neither of those things is true and will lead to a kid that will not grow well and will have problems with coccidiosis and worm overloads, which may ultimately lead to death. Some of these kids also get dehydrated and die because they are not drinking enough water.

When do baby goats start eating grain and hay?

If you are bottle feeding and the kids have no adults to imitate, they may not start to eat hay or grain until closer to a month old. This is why I discourage people from raising baby goats in the house. Even if the kids don’t appear to be eating anything, you should have hay available for them 24/7, which is kind of messy in your living room. Like human kids, goat kids put everything in their mouth, so if the hay is there all the time, they’ll eventually put it in their mouth and figure out that they can chew and taste and swallow and all of that good stuff. If they are in your house, they might try things like paper and electrical cords.

Can goats eat corn, wheat, barley, oats, and other grains?

There is no place for simple grains in a goat’s diet beyond a handful once or twice a week as a treat. Think of individual grains as goat candy. Corn, wheat, barley, and oats are not good for goats. They are high in carbs and low in protein. Milking does need 16% protein in a goat feed, and simple grains have half that or less.

Grain can cause urinary stones in male goats, and it offers zero benefit to them. If you have a male goat that has lost a lot of weight due to parasites or a similar stressor, you can temporarily feed him the 16% goat feed because he needs protein to rebuild lost muscle mass.

What should goats not eat?

Please don’t feed your goats things that they would never eat in nature, such as dog biscuits or human cookies. Dog biscuits have meat in them, and goats are vegetarians with a rumen. The last thing they should be consuming is meat.

You also don’t want to feed them any of our processed human food like white bread, pastries, and cookies that are totally lacking fiber. Concentrated sugar found in cookies can cause a goat’s blood sugar to go unnaturally high.

An occasional tortilla chip that is just corn, corn oil, and salt won’t hurt them, but it should definitely be an occasional treat.

38 thoughts on “What do goats eat? It depends!”

Thrifty Homesteader is a participant in the Amazon Services LLC Associates Program, an affiliate advertising program designed to provide a means for sites to earn advertising fees by advertising and linking to amazon.com. You pay the same price when you purchase through affiliate links as you would if you went directly to Amazon, and our site earns a small commission, so by shopping through our links, you are helping to support our blog so that we can continue to provide you with free content.
758 shares
758 shares