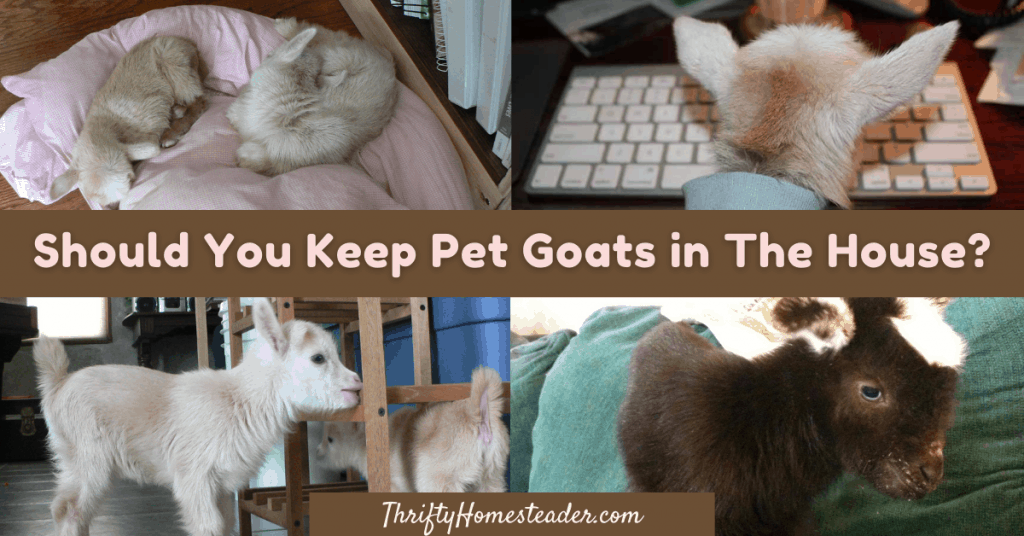 Goats are adorable companions that easily steal our hearts. But should they steal our homes too? Because bringing a goat into the house is like signing over the deed. There’s a time and place to bring goats into our homes, and usually, it’s when they need a little extra support. Often, we bring bottle babies indoors when they’re not nursing. And sometimes, we bring hypothermic kids inside to warm them up, for example.

But the goal is to return them either to their mother or to the outdoors when they’re healthy. In other words, we get them out the door asap. And that’s not only for the good of our household but also for the well-being of the goat.

In case you need a few more reasons to keep your goat outside, consider these:

Normally, I’d say that the goat-eating-the-tin can allegory is way off (because goats are picky eaters). But when it comes to making the decision to eat non-food items in the house, the goat seems to excel. In fact, they’ll get into a lot of trouble by eating things that are extremely bad for them. 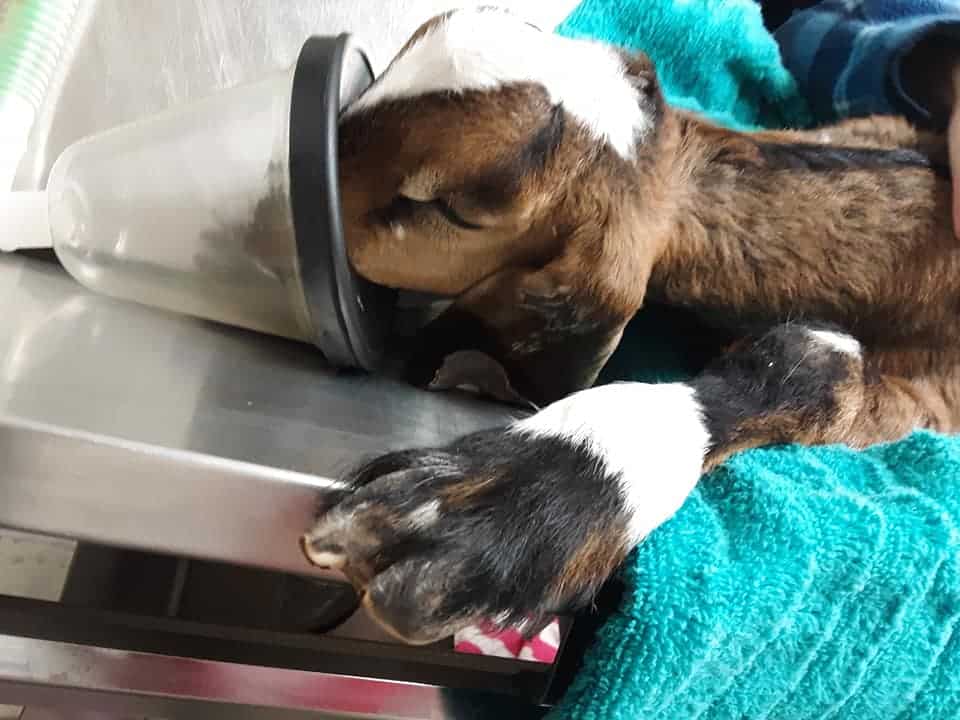 For example, I heard about a house goat that needed surgery to remove all of the “stuff” he had eaten. This goat gobbled hair ties, small plastic toys, balloons, and everything else under the sun. Needless to say, the surgery to remove these items from the goat’s rumen was insanely expensive. Unfortunately, the goat passed away the day after the surgery. 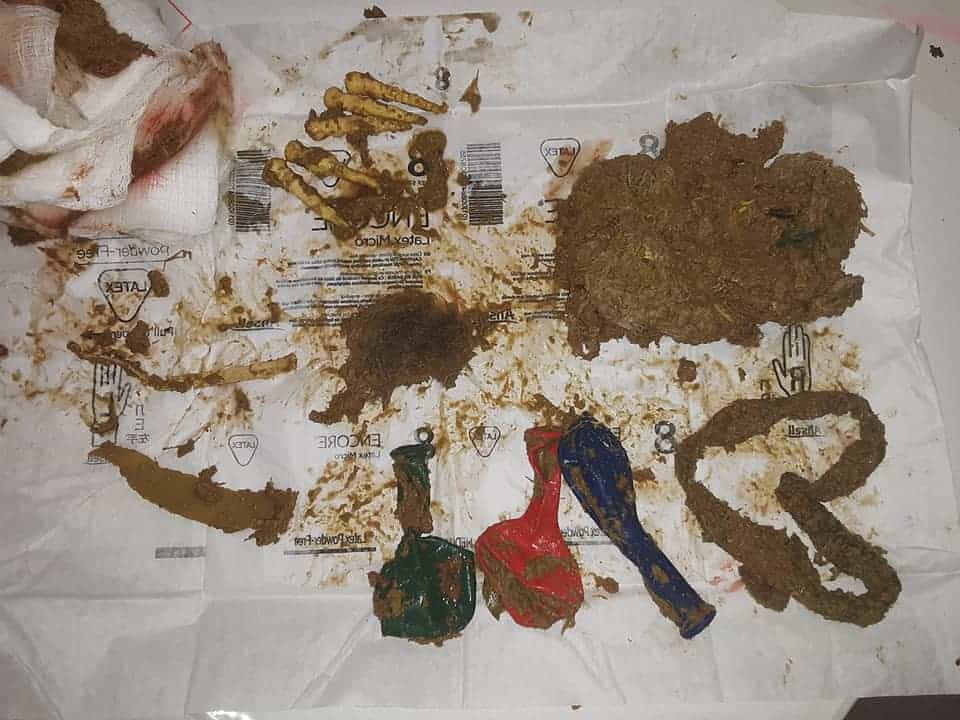 Aside from children’s toys and, undoubtedly, your favorite possessions, goats can also get into trouble with electrical appliances. You see, goats use their mouths for everything including feeling their environment. So putting an electrical cord in their mouths is an afterthought for them.

Even if your goat doesn’t get electrocuted, it may ruin your electrical cord. It may not seem like a big deal, but what if it’s the charger for your laptop, for example?

Ask me how I know about these things!

Good question: One of our bottle babies ruined a DVD player when he danced on it while it was playing.

The kicker? He was only one day old!

So take it from me, the trouble goats get into can be adorable … as long as it’s outdoors where it’s safe for them (and our household items).

They’ll Probably Need to Be Returned to Pasture

You know how everyone wants Easter Bunnies in the springtime? Often, those cute bunnies are abandoned once they’re older, messier, and maybe not quite as cute as they once were.

I’m not saying you’re abandoning your house goat. But remember, that cute little kid (that you can hold in your arms today) will one day become much bigger.

And when that happens, bigger messes also happen.

The solution to those bigger messes, more destruction, and a sassy teenage goat, is to put it back outside. This would be fine except for the fact that this goat has learned a lot of its life skills indoors, and not in the pasture with other goats.

Furthermore, your goat has come to know you as a part of its herd, most likely considers you its mother. So reintroducing that goat to the outdoors, fencing, and other goats could be a real challenge.

Why? Because they want to get back to mommy—which is you.

In fact, we tried keeping goats indoors for a while and we wound up with six 3-year-old apple trees killed because my daughter’s pet housegoats had several kids in the house. Once they were returned to the pasture, they kept escaping.

In other words, when goats aren’t raised in their natural environment, with a herd of goats, they develop bad manners, and maybe even social issues amongst their herd mates.

Goats in The House May Have Health Problems

Keeping goats in the house can lead to health problems for the goat. You see, goats are ruminants, and they need to eat nearly all day long. They walk around, eat until their rumens are full, then they go lay down at camp. While they relax in the sun, they burp up their cud and chew everything a second time. Finally, they send their cud back down to their second stomach.

If goats aren’t able to go through this rather complicated process of digestion, they can develop health issues, go off feed, bloat when they do eat, or encounter a myriad of other digestive issues that may even lead to death.

In other words, their digestive system has a very specific, and delicate, process that must be adhered to for the goat to be happy and healthy.

So chew on this for a minute: Where, in your house, do you plan to put a hay feeder to meet these digestive demands?

Oh, and don’t forget the loose minerals they also need…24/7.

Goats are known for their athletic antics, and just because they’re house goats, it doesn’t mean they won’t have the urge to kick up their hooves and expend some built-up energy.

In fact, moving, in general, is a part of their digestive process. Remember, they walk all day, except when they lay down to chew their cud.

Unfortunately, I’ve seen a lot of city goats kept in small backyards that wind up obese from lack of exercise. Not to mention the fact that they’re overfed because they’re bored, start streaming, and are given more feed than they need (in hopes of keeping them quiet).

I won’t say that housetraining a goat can’t be done, because I’ve witnessed my daughter successfully teach a goat to pee on a towel many times.

Pooping, on the other hand, I’m not so sure about. I’ve never heard of anyone teaching a goat to poop somewhere specific. As you probably already know, goats tend to just let the berries fly whenever the urge hits, and I can only imagine how difficult it would be to get that under control.

On the other hand, you can put a diaper on a goat for a short time to do a therapy visit, for example.

However, diapers could cause some serious skin issues if left on for extended periods of time.

For example, we had a paralyzed llama that could not stand, so pee and poop wound wind up all over her back end, which caused a rash and ultimately the skin started to break down. (Normally llamas squat to pee so their skin gets zero urine exposure.)

So, it stands to reason that, eventually, any animal wearing a diaper for any longer than an hour or two would have some issues if their skin had wet pee and poop pressed against it. And I’ll be honest, the idea of putting a diaper on a goat long-term sounds cruel to me.

So while there are reasons to bring a goat into your home, it’s just not fair to the goat, or you, to keep it inside long-term. In fact, you’ll probably find that you enjoy your goat much more outdoors than you do in your kitchen, for example. In the end, everyone is happier and healthier living in their respective environments. 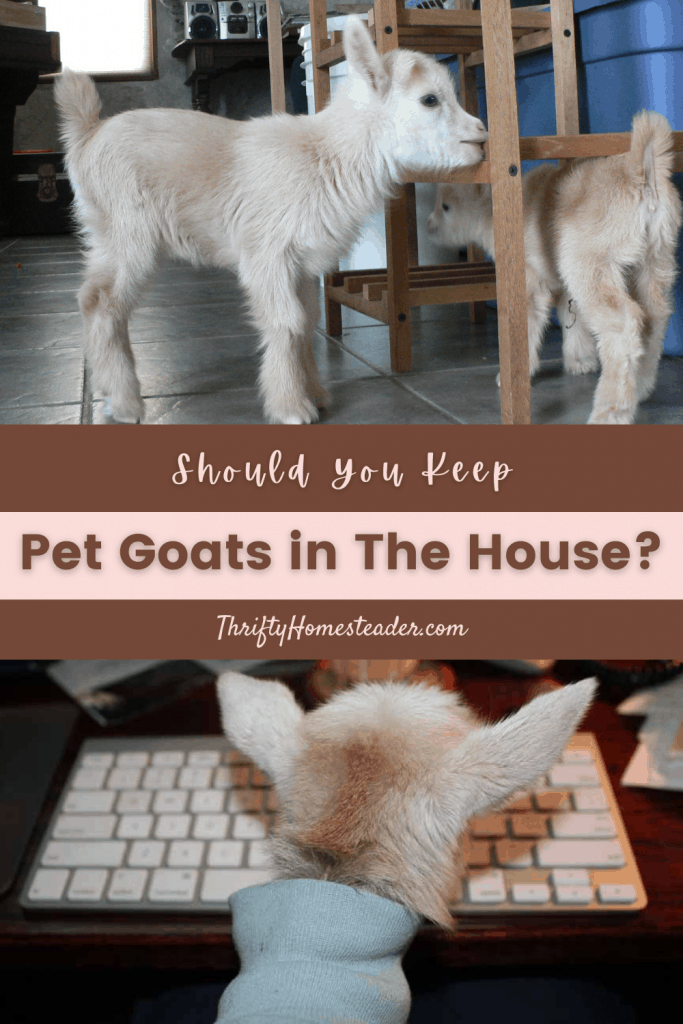