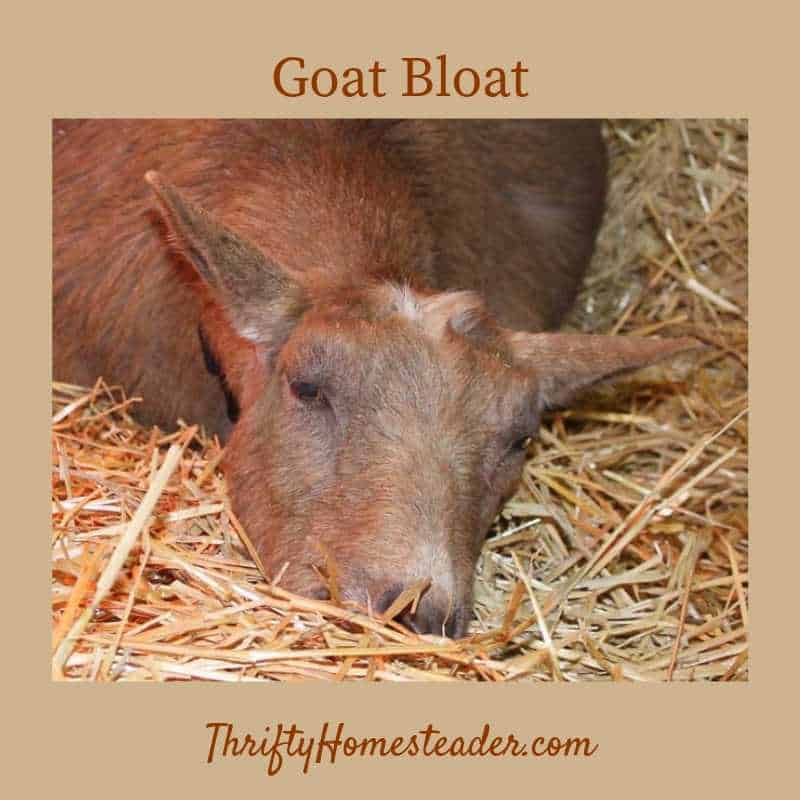 Many people think a goat is bloated when it simply has a large belly. I have seen many people post online, “My goat has been bloated for several days,” which is impossible. A goat with bloat will die within hours if not treated. If a goat’s belly has looked unusually large for several days, it is probably a hay belly, which is most likely caused by parasites. A goat with a heavy load of parasites may be “starving” because the parasites are either causing anemia or consuming the nutrients in the goat’s digestive system. This causes the goat to eat constantly, which causes their belly to be quite large.

The belly is not usually the first thing you will notice when a goat has a real case of bloat. It will probably be lying down in a corner somewhere hiding. It will have zero interest in food, may be grinding its teeth (a sign of pain), and it will not want to get up and move. However, once you get it to its feet, you will probably notice that its abdomen looks bigger than usual. You can tell the difference between a hay belly and bloat because if you press on the left abdomen (over the rumen) of a goat with a hay belly, you can mash it in as if you were mashing in cookie dough. And it stays mashed in when you lift your fingers. You’ve just moved around chewed up hay and forage in the rumen. A goat with bloat, however, has an abdomen that feels tight like a drum, which is why the technical term is ruminal tympany. If you are able to press it in at all, it will spring right back out because the rumen is filled with gas.

Goats on pasture rarely get bloat, provided that dietary changes occur gradually. If you keep your goats in the barn or on a dry lot all winter, you should expose them to pasture slowly in the spring. Start with only a few hours of pasture a day after giving them hay in the barn before letting them out so that they don’t gorge themselves on the pasture. Suddenly grazing lush fields of legumes, such as alfalfa or clover, and sometimes even wet spring grass can cause frothy bloat, which is when a buildup of gas cannot be released from the goat’s rumen, putting pressure on the heart and lungs and ultimately causing death. If you are not seeing fast improvement in treating a goat with bloat, you should call the vet.

The goal of treating frothy bloat is to break down the foam, which is usually done by drenching with 100–200 cc of cooking oil.(1) There are also commercial anti-bloating medications available. Although some people recommend putting a stomach tube into a goat to administer the oil, there is no benefit to doing this, and it is in fact much more dangerous than simply drenching a goat because of the risk that an inexperienced person could put the tube into the goat’s lung and kill it. If a goat can swallow, it can be given liquids orally with a drenching syringe. After drenching, the goat should be encouraged to walk around, or the rumen can be massaged to help the goat release the gas.

Goats can also get bloat by gorging themselves on grain.(2) When goats chew, they produce bicarbonate. Eating hay or browse requires lots of chewing. Eating pelletized feed or grain, especially grain that is finely ground, requires very little chewing, which means the goat will produce very little bicarbonate. This is why it’s a good idea to have baking soda available free choice in a separate dish at all times if you feed grain. You never know when a goat’s rumen could be a little off. You may also have a goat or two that chews very little when on the milk stand because it is essentially a grain hog that will try to consume as much as possible. If you are new to goats, you also have no idea how easily goats might be able to escape their area and find chicken or pig grain upon which to gorge themselves. Studies have shown that baking soda is an effective treatment for grain bloat.(3) In one study where they overfed crushed rice to goats, 100 percent died in the group that did not receive baking soda, whereas only 20 percent died in the group that did receive baking soda. If baking soda is available free choice, goats will usually self-medicate when needed.

If a vet is called, he or she may use a trochar to release the gas. It’s basically a metal tube that punctures the rumen to allow gas to escape through the tube. If you can’t reach a vet quickly, a less risky option to release the gas is to insert a 14-gauge or 16-gauge needle into the rumen.

Because nothing on the internet ever dies, there has been a resurgence of an old home remedy for bloat, which is to give liquid laundry detergent (specifically Tide) to a goat with bloat. This was common advice back in the 1970s. Back then liquid laundry detergent was little more than surfactants, which is what is in modern bloat medicines. Today’s Tide, however, contains 27 ingredients, including optical brighteners, water softening chemicals, enzymes, polymers, colors, and fragrance, in addition to five different surfactants. Many of these ingredients are carcinogenic and endocrine disruptors, which is why some consumers today have chosen more natural laundry detergents — and that’s just because we don’t want them on our skin. None of the ingredients in modern laundry detergent are meant to be consumed orally; they are poisons. In fact, thousands of children wind up in hospital emergency rooms every year after consuming laundry detergent, with a few in a coma, and one or two dying. Laundry detergent damages the esophagus and can cause breathing difficulties so severe that some children are put on a respirator. 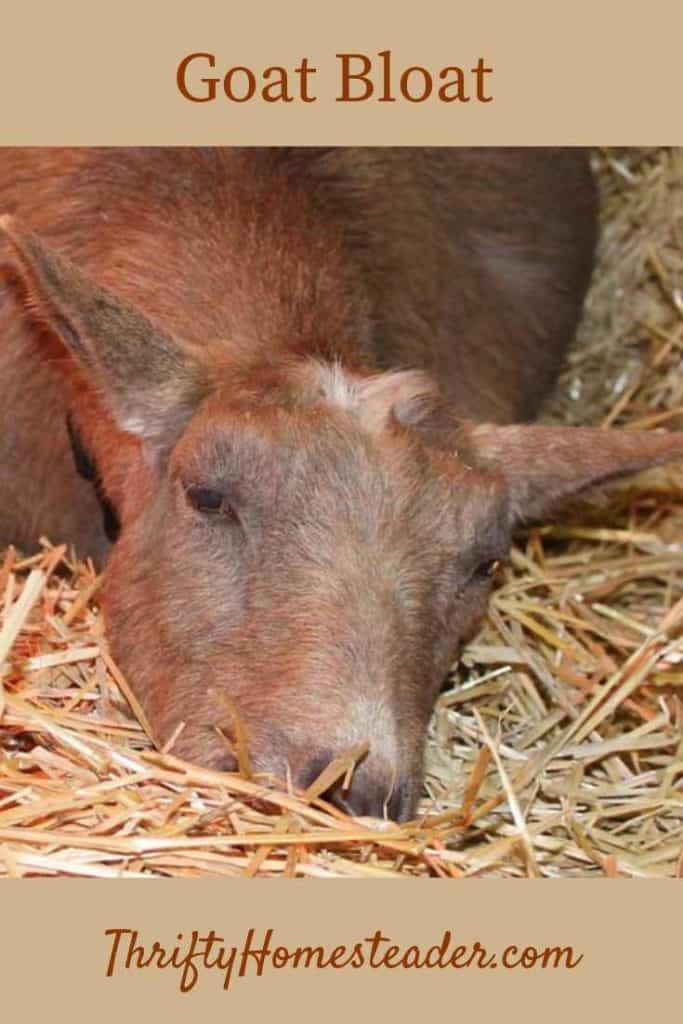