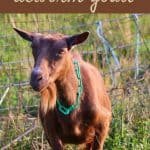 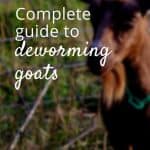 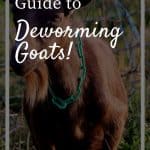 Although it appears there are about a dozen chemical dewormers on the market, all fall into one of three categories. Drugs in the same category have a similar mode of action and work to kill similar worms. Deworming goats correctly is an important step in preventing dewormer resistance.

When I was writing the first edition of Raising Goats Naturally in 2013, a new dewormer that was the first in a new class had been submitted to the US Food and Drug Administration (FDA) for approval, and I naively wrote that it was not expected to be on the market for a couple of years. Monepantel is still not on the market in the United States although it was already available in Australia at the time the first edition was published. Some researchers and veterinarians do not think it will ever be approved for use here.

Don’t be too disappointed though because research has shown that worms developed resistance to the new dewormer on some Australian farms in only two years. The answer does not lie in inventing new dewormers. The answer is to use our dewormers more intelligently.

“White dewormers,” so called because they are most commonly sold as a white liquid or paste, are benzimidazole dewormers, which include fenbendazole and albendazole. It appears there are more dewormers than there really are because some brand-name drugs have the same one or two active ingredients. Panacur and Safe-Guard both use fenbendazole as the active ingredient. Valbazen is the trade name for albendazole. Only Safe-Guard is approved for use in goats, but other drugs are used off-label.

The benzimidazole class of dewormer is the only one effective against tapeworms. While a single dose of albendazole kills tapeworms, fenbendazole must be given three days in a row to treat tapeworms. Albendazole is not recommended for use in early pregnancy, but it has been linked to a variety of problems in multiple species at different stages of gestation, so some people may choose to avoid it throughout pregnancy.

The second class is the macrocyclic lactone dewormers, which are sometimes called the clear dewormers because they are a clear liquid or gel. This includes ivermectin and moxidectin. Moxidectin is considered much stronger than ivermectin, so ivermectin is generally used first because moxidectin can still be useful in some goats when ivermectin no longer works. Although these drugs are not labeled for use in goats, they are approved for extra-label use orally or as a pour-on. (Never use a pour-on orally!)

Levamisole is sold as a bolus or as a powder that can be mixed with water and given orally. Because levamisole has been used so rarely in goats, some people have found that it works when other dewormers are no longer effective, including Rumatel, which is in the same class.

One must be very careful, however, when using levamisole because the margin of safety when dosing is not as large as with other dewormers, making it easy to overdose a goat. While most sheep dewormers are used in goats at twice the sheep dosage, levamisole is used at only 1.5 times the sheep dosage. Signs of toxicity include tearing of the eyes, excessive salivation, and the goat walking like it’s drunk. In most cases, the goat will recover after a few hours or days of rest, but if the overdose is too high it can cause death.

As of this writing, one researcher is advocating the use of dewormers from all three classes at every deworming. Although research has shown that provides the best efficacy rate in terms of killing worms, I personally won’t do that unless I have a goat that really needs it. Every time you use a dewormer, you take a step towards dewormer resistance, and if you combine all three, then you’ve just created a world with only one dewormer.

If people only used dewormers when it was absolutely necessary, then dewormer resistance would never happen. But obviously lots of people are indiscriminately using dewormers, and I’m concerned that if everyone starts giving all three at once, the worms will become resistant to this combo, leaving producers with nothing to use when a goat is seriously debilitated by worms.

This isn’t just theory. It actually happened a decade ago on our farm. The idea of using two or three dewormers has been around for that long, and when we started seeing dewormer resistance, we started using two dewormers. Ultimately we used all three simultaneously, and within only a few months, they quit working.

Extra-label drug use in goats

Because goats are a minor species in the United States, it is not profitable for drug companies to test their drugs on them to get FDA approval to have the drugs labeled for use in goats. Veterinarians and owners, however, need to be able to treat a sick animal.

The Animal Medicinal Drug Use Clarification Act (AMDUCA) of 1994 created guidelines for using drugs extra-label so that drugs can be used legally in different species, even when the drug has not been FDA approved for that species. However, this does not mean that you can use whatever drug you want to use in goats.

According to AMDUCA, you can use an extra-label drug to treat your animal only after consulting with a licensed veterinarian and only if there are no FDA-approved drugs available to treat that condition. You may also use an extra-label drug when the only approved drugs don’t work. For example, this means that legally you should only use fenbendazole or morantel tartrate as dewormers because they are labeled for use in goats. However, if they no longer work, you could use a dewormer that is labeled for a different species.

To find approved dosages, as well as meat and milk withdrawal times for extra-label drugs, consult the Food Animal Residue Avoidance Databank (FARAD), which is supported by the United States Department of Agriculture (USDA) and maintained by several universities. If you don’t see a milk or meat withdrawal time, you should not use that drug in an animal that will be used for milk or meat. Sometimes there is no recommendation because the drug has not been studied, but it may also be because the drug stays in the animal’s system for so long that it is impractical to use it, especially in dairy animals.

This is an excerpt from the second edition of Raising Goats Naturally: A Complete Guide to Milk, Meat, and More by Deborah Niemann.

Here’s a video that shows you how to drench a goat.

This podcast on Using Dewormers Correctly is an interview with researcher Susan Schoenian at the University of Maryland Research Center.

Milk and Meat Withdrawal in Goats Following Drug Use

How to avoid dewormer resistance

Coccidia is often confused with worms because both are internal parasites, but coccidia is not a worm and is not killed by dewormers. To learn more, check out Preventing Coccidiosis.

Bioworma: A new weapon against roundworms in goats and sheep

Thrifty Homesteader is a participant in the Amazon Services LLC Associates Program, an affiliate advertising program designed to provide a means for sites to earn advertising fees by advertising and linking to amazon.com. You pay the same price when you purchase through affiliate links as you would if you went directly to Amazon, and our site earns a small commission, so by shopping through our links, you are helping to support our blog so that we can continue to provide you with free content.
636 shares
636 shares