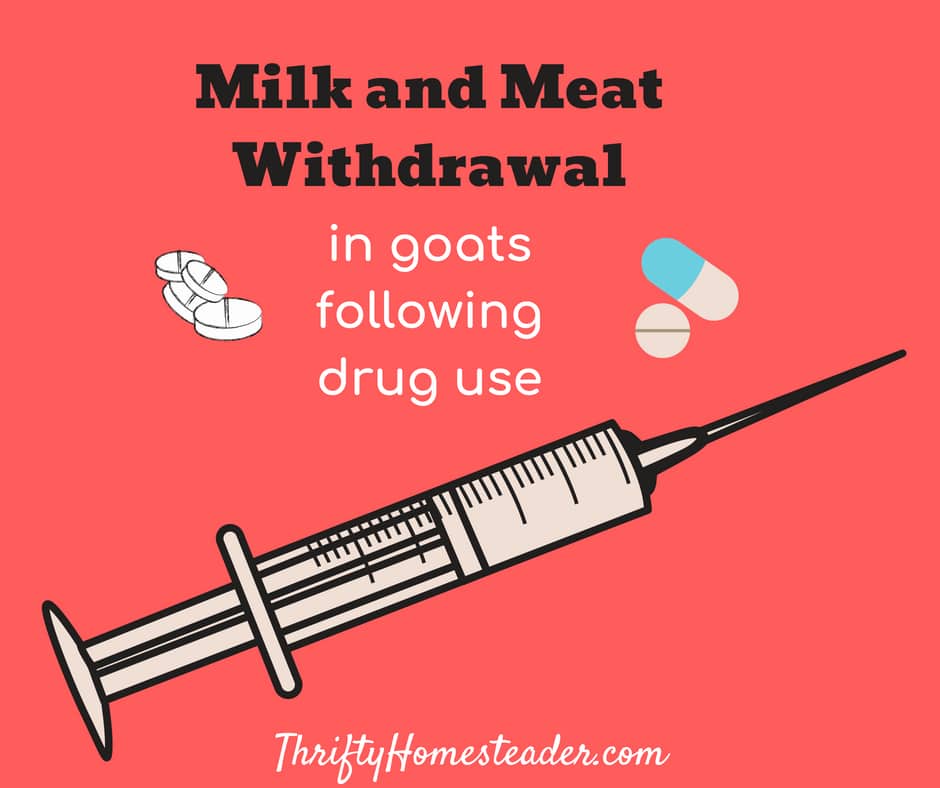 Nothing ever dies on the Internet, and nowhere is this more true and more dangerous than when it comes to drug use in goats and other livestock. Because most livestock are food producing animals, this is far more important than getting drug use right in dogs and cats. One reason I raise my own food is because I don’t want to consume drug residue in meat and milk. It would be impossible for slaughterhouses to test every animal for every drug, but when I raise my animals, I know if they have ever had any drugs, and I know when and how much and how it was administered. Unfortunately there are many people who are unknowingly consuming drugs through their animals’ meat and milk.

When using drugs that are labeled for food animals, the meat and milk withdrawal will be on the label. Most people assume that means there will be no drug residue left in the meat or milk after that time has elapsed. However, that is rarely the case. Almost all drugs have a “safe/tolerance level” that is the maximum amount of the drug that can be found in testing. For this reason, we always wait longer than whatever time period has been established before we are willing to use meat and milk for human consumption after drugs are used. The FDA may think that 80 ppb tetracycline is an acceptable level of the antibiotic in food, but I prefer 0. I understand businesses want to get their products back into the sales channels as quickly as possible, but if I’m producing my own meat and milk, I really don’t mind waiting a little longer to be extra careful.

Treating cattle, sheep, and pigs is fairly simple because there are plenty of drugs labeled for them, but goats are trickier. Very few drugs are labeled for goats, which means many are used off-label. That means there will be no dosage info or milk or meat withdrawal on the label for goats. You can NOT assume that it will be the same as it is for cattle. They are different animals, and research has shown that they metabolize drugs very differently. For example, the milk withdrawal for ivermectin given orally in cows is four times as long as it is in goats, but the same drug used topically has 0 days withdrawal in cows and 1 day in goats, and when injected it is 40 days in goats and 47 days in cattle.

Oral vs sub-q vs topical

There are some outdated websites that give a single withdrawal period for drugs, regardless of mode of administration. Unfortunately I see a lot of people on social media recommending the injection of ivermectin (Ivomec) and moxidectin (Cydectin) in milk goats. Most of those people are unknowingly ingesting dewormers in their milk. For example, if you give a goat an oral dose of ivermectin, the milk withdrawal is between six and nine days, depending upon the dose. However, if you inject the same amount that would have a six day milk withdrawal orally, the milk withdrawal for that same dosage when injected is 35 to 40 days!

If you inject moxidectin, the withdrawal period is two or three months while the oral is 12 to 18 days, depending upon which study you look at. Most sources simply say that moxidectin is not for use in milk producing animals, and a lot of people incorrectly assume that is because it has not been studied, so they guess that it’s about the same as the oral withdrawal period, which is a huge mistake. It is not practical to inject dewormers in milk-producing animals because the drugs stay in the goat’s system for so long that you would have to dump a lot of milk.

Where do you find credible info on withdrawal periods?

Conflicting information online is the biggest frustration I hear about from new goat owners. Why do so many websites and blogs have conflicting information? Unfortunately most online sites are not kept up to date. Some of the most popular old sites even say that they have not been updated in years, but people continue to use the outdated information on them. When it comes to drug use, you need the most current information that is based on research, especially when using antibiotics. Antibiotic-resistant bacteria is a big problem in the US that causes thousands of deaths every year.

The Food Animal Residue Avoidance Database is a website funded by our tax dollars and kept up to date by several universities. I’ve been using it for years and have seen a number of changes happen. You can use it to look up any drugs that are being used off label. You go through a series of drop down menus to choose species and drug, then you see a chart with dosage information and then a chart with meat and milk withdrawal. There are also links to the studies that were used to come up with the recommendations, if you want more information. 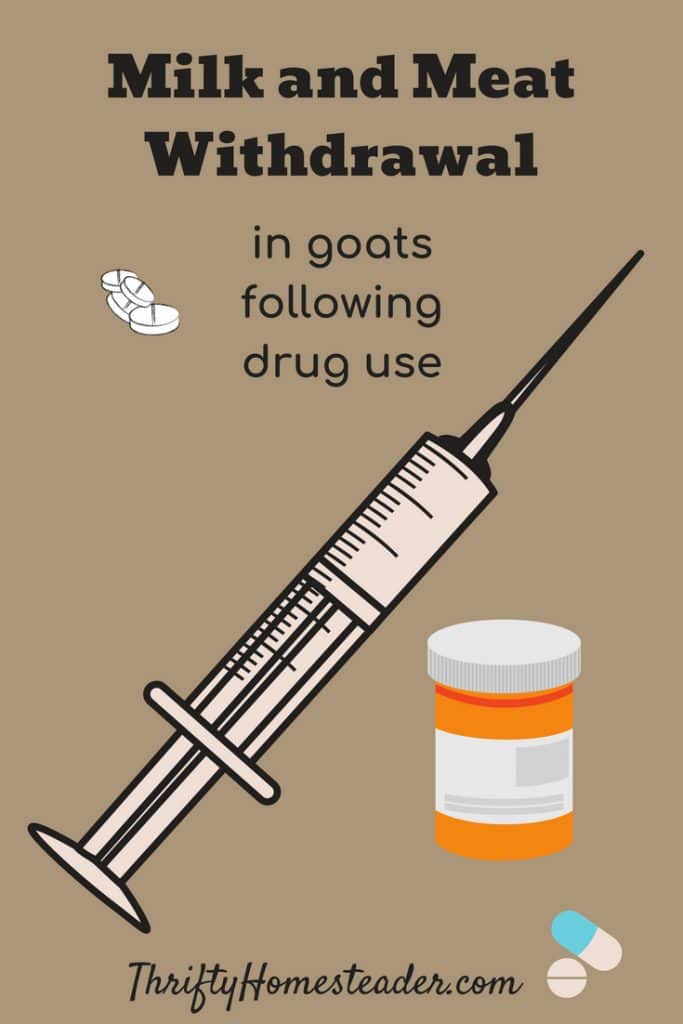 Thrifty Homesteader is a participant in the Amazon Services LLC Associates Program, an affiliate advertising program designed to provide a means for sites to earn advertising fees by advertising and linking to amazon.com. You pay the same price when you purchase through affiliate links as you would if you went directly to Amazon, and our site earns a small commission, so by shopping through our links, you are helping to support our blog so that we can continue to provide you with free content.
578 shares
578 shares