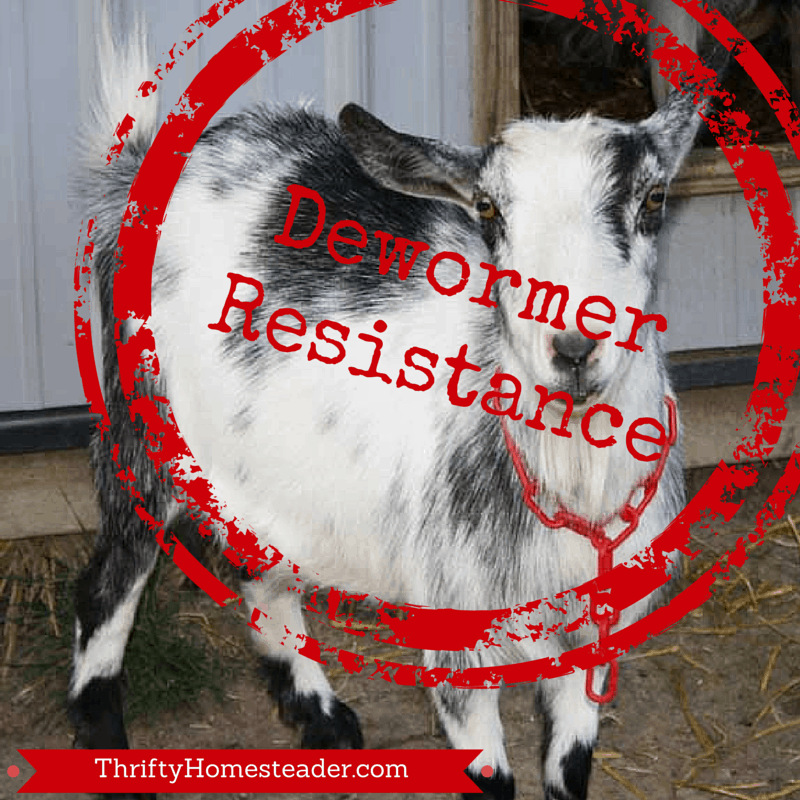 It is a well-known fact that internal parasites are the leading cause of death among goats. Unfortunately, it is a problem of our own making. You have probably heard of antibiotic-resistant superbugs, which resulted from the overuse of antibiotics. A similar phenomenon has occurred with chemical dewormers and internal parasites in livestock. Veterinary professionals thought parasites could be eliminated in livestock and began recommending routine use of chemical dewormers in healthy animals. Although this worked in the short term, the long-term result has been dewormer-resistant parasites.

During the 1980s and 1990s, the standard advice was to deworm livestock on a pre-determined schedule in an attempt to keep internal parasite loads so low that they would never adversely affect production. When people started to see that the parasites were surviving dewormings, the advice was changed slightly to tell people to switch dewormers from one treatment to the next so that the worms that weren’t killed by the previous dewormer would be killed by the new drug. To reinforce this idea one company even came out with a horse dewormer system that numbered their different dewormers so owners could use them based on which quarterly deworming they were administering. To complicate matters for the goat owner, large animal vets see plenty of horses and may focus their continuing education on the animals that make up the largest portion of their practice. This means that when it comes to goats, many vets are still repeating what they learned in vet school fifteen or twenty years earlier. Depending on where a vet went to school and who taught the small-ruminant classes, even some newer vets are still practicing with old information. One researcher told me that about half of what we know about parasites has been discovered in the last twenty years and much of that was not taught in vet school until the last five years. Many of the old recommendations were based on personal experience, opinions, and logic, and subsequently have been proven to be wrong.

In the last ten years, a lot of research has been done on internal parasites, especially on barberpole worms, because of the large losses experienced by sheep and goat producers in the southeastern United States. A great deal of research in this area, however, has been done in Australia, New Zealand, and South Africa. One study after another clearly shows that dewormer resistance is a real problem. Because there are only three categories of dewormers, it does not take long for a resistance problem to develop when they are used frequently. Research shows that if parasites are resistant to one drug in a class, the other drugs in that class may not work.

When talking about resistance, it is important to understand that we are not usually saying that the drug kills zero percent. Ideally, a dewormer will kill as close to 100 percent as possible. But the more you use a dewormer, the fewer worms it will kill because the population of resistant worms is growing and reproducing. Depending on how sick a goat has become from a heavy load of parasites, a reduction of 70 or 80 percent may not be enough to save it from dying. It is also possible that a severely debilitated goat will die even if all of the worms are killed. The sooner you stop over-using chemical dewormers when parasite resistance is evident, the better your chances of reversing the problem will be.

Using dewormers selectively means that you deworm only when an animal has a level of worms that is causing it to be anemic, not grow normally, not produce milk as expected, or otherwise show signs of illness. You do not deworm a doe simply because she has kidded or because other goats in the herd have a high level of parasites. These two practices will lead to rapid dewormer resistance problems. Now, you’re probably wondering why so many people do prophylactic deworming and why many vets recommend it. Without looking at long-term research, prophylactic deworming seems to work.

Common Practice #1: If you deworm all the does after kidding, they have lower parasite loads, lose less weight, and produce more milk. Why wouldn’t everyone want to do this? Because in the long term, this is part of a losing strategy. It is unlikely that all of the does needed deworming, and using a dewormer when it isn’t needed means you have just taken one more step towards dewormer resistance and the day when a dewormer will be needed and it no longer works. By deworming all of the does you are selectively breeding worms for dewormer resistance. Also, by deworming routinely at kidding, you lose the opportunity to select breeding stock based on parasite resistance.

Common Practice #2: If you have a couple of goats with a high parasite load and you deworm the whole herd, no other goats wind up with a high parasite load. Why wouldn’t everyone want to do this? First of all, the rest of the herd probably would not have gotten sick, even if you had not given them a dewormer. I’ve heard vets say that it’s only common sense that if a couple of goats in a herd have high worm loads, the rest of them do too. Unfortunately, common sense fails this time. Research has shown that in most cases only a few animals in the herd will have a high parasite load. Eliminating nearly all worms works well in the short term, but if you want to have goats long term, you will eventually face the consequence of dewormer resistance.

If you deworm the whole herd, you kill every worm that is susceptible to that particular dewormer. Sounds great at first. Unfortunately, no dewormer kills 100 percent of worms. This means that every worm left living in your goats is resistant to the dewormer that you just gave them. The only reason a dewormer is effective more than one time when you do a whole-herd deworming is that the goats are continuing to ingest worms in the pasture and those worms are not resistant. But they mate with the resistant worms inside the goats, and some of those offspring are resistant to the dewormer. So, the more you use a dewormer, the greater the number of resistant worms you are breeding.

Common Practice #3: Deworm your goats ten days after the initial deworming to kill parasites that have just hatched because the first deworming will not have killed the eggs. Of course, when you do that, you do kill some worms that have hatched, but you also wind up with more resistant parasites that survived the second deworming, increasing the number of resistant parasites on your pasture. The more often you use a dewormer, the faster you are breeding the parasites to be resistant to the dewormer you are using. This advice for a follow-up deworming was originally given for fenbendazole, which had poor efficacy against arrested worms, which would then be killed by the second dose a couple weeks later. Unfortunately, a lot of people concluded it would be a good idea with all dewormers, regardless of whether it was necessary. After using any dewormer, you should continue to monitor the body condition and anemia status of the goat. If the animal does not improve, follow up by doing a fecal exam. If the reduction in fecal egg count is minimal, you may need to give a second dose of dewormer or to use a different dewormer.

To learn more, read my post about preventing problems with internal parasites, and watch this video.

War of the Worms from Blobina on Vimeo.