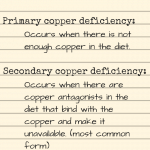 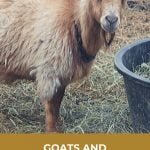 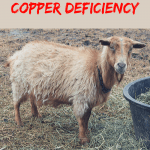 Knowledge of goat nutrition has changed drastically in the last two decades. Twenty years ago, goats were lumped into the same category as sheep, and most people believed they didn’t need copper. Ten years ago, most vets realized goats needed copper, but they thought that deficiency was impossible if you were feeding a commercial goat grain and providing a free choice mineral. Today, we know that copper deficiency can cause a long list of symptoms, from cosmetic to life threatening.

The earliest signs of copper deficiency are a faded coat, fish tail (balding tail tip), and losing hair on the face, especially around the eyes or the bridge of the nose. A black goat turns a rusty color; red goats turn gold; gold goats turn cream; and cream goats turn white. A goat may also fail to shed its winter coat in a timely manner.

If left untreated, a copper-deficient goat will start to have fertility problems. A buck may not settle does (get them pregnant). A doe may not come into heat or may have silent heats. She may get pregnant but abort within a few weeks. Or she may give birth to kids that are too premature to survive.

Check out my “Goat Nutrition” course

Goats may also appear to be anemic. A copper deficient goat will have more trouble dealing with a small load of internal parasites than a goat that is not deficient.

In severe cases, they may have bowed legs or swayback, and some may wind up with spinal injuries. Ultimately, a severely copper deficient goat will die.

To get an idea of how common some of these symptoms are, you can see the responses to the question about symptoms on the copper survey I conducted in 2016.

Of 570 respondents, 63 did not see any symptoms of copper deficiency in their goats.

The balding tail tips and loss of color in the coat are the most common symptoms because many people now recognize that as a symptom of copper deficiency and treat their goats before they begin to exhibit more severe symptoms. (The total adds up to more than 100% because most people checked multiple symptoms.)

Primary copper deficiency occurs when a goat doesn’t consume enough copper. This is more likely if the owner is feeding plain grain rather than a commercial goat feed. However, not all goat feeds are created equal.

Years ago I spoke to a professor at Texas A&M who had done research on goat nutrition, and he suggested using a commercial goat feed with at least 35 ppm copper. Many brands have less than that, so you have to read the feed tag.

Goats should also have a free choice mixed mineral available, and it should have around 1500 ppm copper sulfate. Even though you provide as much copper as a goat needs, however, they can still wind up copper deficient. How?

Secondary copper deficiency means that a goat is consuming enough copper, but they are also consuming a large amount of a mineral that is a copper antagonist. That means that it binds with the copper, making it unavailable for the goat.

Sulfur, iron, molybdenum, and calcium are copper antagonists that are the most likely culprits. Sulfur, iron, and calcium can be found in well water. Sulfur makes the water stink like rotten eggs or a dirty dish rag. Iron turns sinks and bathtubs orange, and calcium leaves mineral deposits on fixtures.

In the survey, 215 said their well water was high in iron, 66 said it was high in sulfur, and 25 said that they lived within 25 miles of a coal-fired power plant. Emissions from a coal-fired power plant may leave sulfur deposits on the pasture. (Unfortunately, I did not ask about calcium in well water.) Alfalfa is high in molybdenum, so if goats are eating a diet high in alfalfa, copper deficiency can be a problem.

Unfortunately, the most reliable test for copper deficiency is a liver biopsy, which is not really practical on a live goat. Blood tests are not reliable. That means you have to watch your goat for symptoms. It’s a good idea to supplement when you see the faded coat, fish tail, and balding on the face, before more serious symptoms develop.

Every now and then I hear someone say that regardless of how much they supplement, one particular goat still has a fish tail.  Note that if a goat lost the tip of its tail to frostbite or if it was bitten off by a pig, as happened here one time, they will always have a fishtail as hair won’t grow on the scar tissue. Also keep in mind that a goat will usually have at least two of these early symptoms, if not all three, when they’re copper deficient.

In the survey I conducted of 570 goat breeders, I learned that most of them prefer to treat copper deficiency with copper oxide wire particles (COWP), sometimes called copper boluses. Most dose at a rate of 1 gram of COWP per 20-22 pounds. This is higher than the dosage recommended on some of the copper boluses sold for goats. Sometimes people think that their goat can’t be copper deficient because they just gave it a bolus a couple of months ago. However, the goat could be deficient again if the dose was smaller.

These were the copper supplements used by the people who responded to the survey:

Frequency of using COWP will depend on your goats. If you have a high level of minerals in your well water like we do, you may have to give it to the goats every 3-4 months to avoid seeing faded coats, fish tails, and balding.

Those who don’t have as much of a problem with copper antagonists may only need to dose every six months or once a year. But the bottom line is to listen to your goats. Do not believe the one company that sells copper and claims that their brand lasts a year. This varies from goat to goat and farm to farm.

For more on the safety of copper oxide wire particles, check out this article, as well as Avoiding Copper Toxicity in Goats. Here is a video that shows you how we supplement with copper oxide wire particles. It is a myth that it must be given as a bolus. We’ve been providing COWP to our goats like this since I read a 2010 study that showed no difference between bolusing and mixing with feed. And liver tests confirm that this method works for our goats, which all have normal copper levels now.

Although there are injectable forms of copper, it is not ideal. When a goat lives in a state of chronic deficiency, it’s better if they consume supplements orally for a more sustained level in their system. Research has shown that 50% of minerals are peed out within 24 hours of being injected.

Because I know people who’ve had goats die from toxicity following injections of copper, I highly recommend that you discuss your herd’s nutritional needs with a knowledgeable veterinarian before supplementing with injectable minerals.

It’s always better if you can prevent a problem in the first place. So, what can you do to avoid copper deficiency in your goats?

What if you’ve done all of these things, and you still think that your goats might have a problem with copper deficiency? Have a liver (or two or three) tested from a goat that died or was butchered. Because we didn’t have a goat vet in our area, I called the lab to learn exactly what they needed for the test, and then my teenage daughter and I taught ourselves how to remove the liver for testing. Later I realized that this represented quite a cost savings, so we continued doing this ourselves and sending the livers to the lab to keep tabs on the copper status of our herd.

I also have a podcast episode where I interviewed a vet professor and ruminant nutritionist about Copper Deficiency and Toxicity in Goats.

Want to learn more about copper deficiency? I’ve created a free online course with a lecture, videos, and handouts. Click here to enroll.

113 thoughts on “Goats and copper deficiency”

Thrifty Homesteader is a participant in the Amazon Services LLC Associates Program, an affiliate advertising program designed to provide a means for sites to earn advertising fees by advertising and linking to amazon.com. You pay the same price when you purchase through affiliate links as you would if you went directly to Amazon, and our site earns a small commission, so by shopping through our links, you are helping to support our blog so that we can continue to provide you with free content.
4058 shares
4058 shares