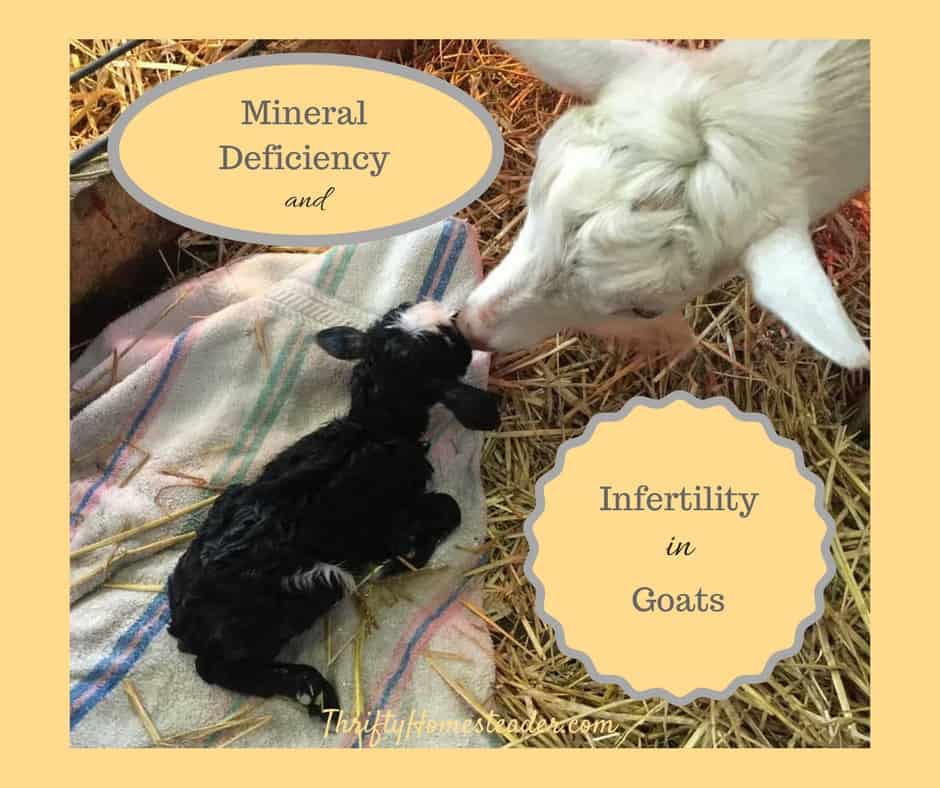 It’s not unusual this time of year to see people complaining on social media about infertility in their goats. Some people are quick to start injecting does with hormones, but many cases of infertility are caused by mineral deficiencies. If you are able to get a doe pregnant with hormones, she may still abort or miscarry or have other health problems if she’s mineral deficient.

If a doe doesn’t get pregnant, she could be copper deficient if you are also seeing other symptoms of copper deficiency: faded coat, fish tail, balding around eyes or bridge of nose, parasite problems, or anemia that is not caused by parasite problems. If a doe gets pregnant, she may abort or give birth too early for the kids to survive. In severe cases, you may also see bowed legs, spinal injuries, and an overall weak immune system.

Copper deficiency is usually caused by minerals in well water, such as sulfur, iron, or calcium. If you are near a coal-fired power plant, that can leave sulfur deposits on your pasture. It can also be exacerbated by too much calcium or molybdenum in the diet, both of which are in alfalfa, which is part of the diet of most dairy goats. Alfalfa without well water is probably not a problem. But if you have well water and your goats get a high proportion of alfalfa in their diet, you will probably need to give more copper than you otherwise would.

If you have a doe that doesn’t get pregnant, but she does not have a faded coat, fish tail, or balding on her face, it’s probably not copper deficiency, especially if you don’t have any of the issues that cause copper deficiency.

Symptoms of vitamin E deficiency are almost identical to symptoms of selenium deficiency, but the cause is entirely different. Goats usually become deficient in vitamin E when they don’t have access to enough green food. This is usually only a problem towards the end of winter when the quality of the hay is deteriorating, or if you purchased hay that’s not great quality. If you live on a small lot and don’t have any pasture or browse, the quality of your hay is especially important.

Most people mistakenly think that BoSe is also a vitamin E supplement. It only contains a small amount of vitamin E as a preservative. The dose of vitamin E in it does not even meet a goat’s requirement of the vitamin for a single day. MultiMin, which is another injectable selenium supplement, contains no vitamin E. So, if your goat has symptoms similar to selenium deficiency, but you’ve given the goat a dose of BoSe or MultiMin, you might suspect vitamin E deficiency.

To learn more, check out my free course, Copper Deficiency in Goats.

Disclaimer: This information is provided for educational purposes and not meant to replace the services of a qualified veterinarian.