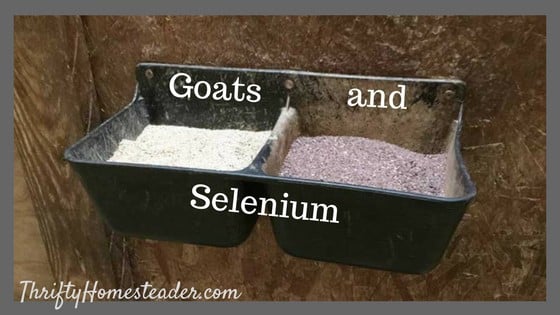 Selenium is a micronutrient needed by goats (and lots of other living creatures). Although they only need a little, a deficiency can cause big problems. When goats don’t have enough selenium, does may have trouble getting pregnant, are more likely to have problems giving birth, are more likely to have a retained placenta, and probably won’t produce as much milk as they otherwise would. They may also give birth to stillborn or weak kids. In extreme cases, goats get white muscle disease.

Unlike our knowledge of copper in goats, which is in its infancy, we have a better understanding of selenium needs. In fact, the government has set limits on selenium in mineral mixes and commercial feeds for fear of toxicity. On the other hand, veterinarians in many parts of the US recommend additional routine supplementation of selenium. So, why has the government set the maximum level so low?

The amount of selenium in the soil varies tremendously around the US. In some areas, such as the Dakotas, there is an abundance of selenium in the soil. Because commercial goat feeds and mineral mixes are sold across the country, the government has set maximum levels of selenium so that goats in areas with the highest levels don’t wind up with toxicity. That means that goats that live in areas where the soil is deficient may not be able to get enough of the mineral through those two products. This is why there is such a variety of products available to add more selenium to your goats’ diet. The frequency of these supplements varies based upon location and individual needs of the goats. Also, keep in mind that the amount of selenium in these supplements varies widely, and not all of these options are ideal in all situations.

Although many people recommend checking a map like the one above, it may not be that helpful. If you live in the lightest areas, you probably will see symptoms of deficiency. However, the darkest area represents soils that have between 0.75 and 5.32 ppm selenium, which is a huge range. If you go to the page where the map is housed, you can click on your county to get the average amount of selenium in the soil for your area. However, according to the map, our soil has 0.76 ppm, which puts us into that top category, yet vets around here usually recommend additional supplementation, and our goat livers and fertility indicated that our goats needed it. So, once again, it comes down to watching your goats for signs of deficiency.

In areas where there is enough selenium in the soil, goats can suffer from secondary selenium deficiency if they are consuming too much sulfur. This can happen on some farms that have well water. You don’t have to get your well water tested to know if you have sulfur. It makes the water stinky and unpalatable for more people. (We once had an intern who called it fart water.)

Like copper, selenium is stored in the liver, and you can test the liver of a dead goat to get an idea of their selenium status. Needle biopsies on livers of live goats are also possible. Before we started supplementing, we had livers tested on goats that died, and our livers were always on the low end of normal. After we started supplementing, we saw an increase in the number of kids each doe gave birth to, and our liver levels are now mid-range normal. We also test on goats that we butcher.

You can also check your goats’ selenium status with blood tests, which is cheaper and easier than liver biopsies. (Please note that blood is NOT an accurate method of determining the copper level of goats.)

You can learn more about selenium deficiency and toxicity in goats by listening to my podcast interview with Dr. Robert VanSaun, a vet professor and ruminant nutritionist from Pennsylvania State University.

I created a survey to get a better idea of how common various symptoms are, as well as how breeders deal with deficiency. Click here to participate, regardless of whether you have seen any symptoms of deficiency in your herd. It’s important to hear from people with various experiences. Please keep in mind that the survey is anonymous, so if you ask a question in the comment section, I won’t be able to respond personally unless you leave your email address. Questions can also be posted in the comment section below.

This post contains affiliate links to Amazon. If you purchase something after clicking on a link, you pay exactly the same price as you otherwise would, but our blog earns a small commission. Thanks for your support!