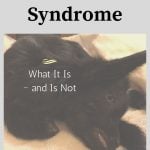 Because of the simple name of this syndrome, a lot of people assume they have a case of floppy kid whenever they have a kid that’s, well, floppy. However, it is a well-defined condition that only occurs between three days and two weeks of age. The textbooks say it has been seen up to a month of age in rare cases, but most vets will draw the line around ten days to two weeks.

What is floppy kid syndrome (FKS)?

A kid who had appeared healthy since birth suddenly can’t stand or even nurse or wrap its tongue around a nipple. The kid does not have diarrhea and is not dehydrated. If not treated, it may fall into a coma and die within 24 to 36 hours. In a small number of cases, a kid has recovered completely without treatment, but that is obviously not recommended.

Check out the “Goat Health” course
Guide to Injury, Illness, and Diseases

Floppy kid is a metabolic disorder caused by a base deficit, according to Goat Medicine. It may be caused by consuming too much milk. It can be easily corrected by giving a kid about one-half to one teaspoon of baking soda dissolved in a small amount of water. Since the kid is not dehydrated (because it consumed too much milk), you only need to mix enough water into the baking soda to get it into the kid. Even though the kid can’t suck, it can usually swallow, so you should be able to get the baking soda into the kid with a bottle or eye dropper and a lot of patience. If not, a vet can administer sodium bicarbonate intravenously. A single dose of baking soda is usually all that is needed, although since overfeeding is the suspected cause, some people also advocate limiting milk consumption for the next 24 hours.

If you don’t see improvement fairly quickly, it’s probably something else.

What floppy kid is not

A weak newborn does not have FKS. Giving it baking soda will do nothing for it. Newborn weakness is usually due to hypothermia or a deficiency in selenium or vitamin E.

A weak kid that’s one or two days old may be starving, especially if it is one of four or more kids being dam-raised. Some kids simply do not have the gumption to fight their siblings for two teats. It is an unfortunate myth that a doe can feed whatever number of kids she births. (See How many kids can a doe feed? for more on this topic.)

A down kid that’s two or three months old does not have FKS. At that age, weakness is often caused by worms or coccidia. While coccidia and other protozoan infections may cause diarrhea, FKS does not. A down kid may also be dehydrated if it has become too weak to be able to walk to the water trough.

This post is for educational purposes only and is not meant to replace the services of a professional veterinarian.

Thrifty Homesteader is a participant in the Amazon Services LLC Associates Program, an affiliate advertising program designed to provide a means for sites to earn advertising fees by advertising and linking to amazon.com. You pay the same price when you purchase through affiliate links as you would if you went directly to Amazon, and our site earns a small commission, so by shopping through our links, you are helping to support our blog so that we can continue to provide you with free content.
1264 shares
1264 shares