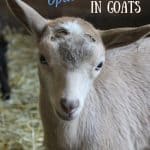 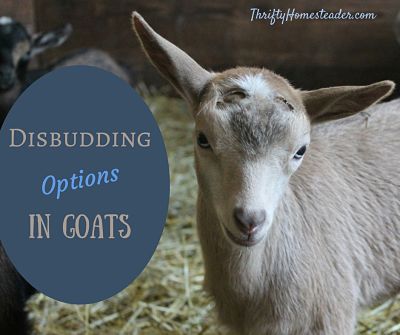 Disbudding is every goat owner’s least favorite task. Disbudding is burning the horn buds at a very early age so that horns don’t grow. If you don’t want your goats to have horns, they should be disbudded within a week or two of birth before horns actually start to grow.

Dehorning is actually removing horns that have already grown, and it is far more dangerous and traumatic. It is usually done by a veterinarian, and the goat is under sedation. However, the procedure leaves two large holes that are open to the goat’s sinuses, making infection a real possibility. It is not stitched up because that actually increases the risk of infection. Please do NOT buy a horned a goat and think you can just have the horns removed. There are plenty of people who sell goats without horns.

Meat and fiber goats, which are not handled that much, usually keep their horns. However, dairy goats are usually disbudded because they are handled twice a day for milking, making injury to humans with those horns more risky. My husband almost had a horn in his eye one day when picking up a horned goat, and I met a woman whose daughter’s eyelid was torn by a goat’s horn.

Horns can also be dangerous to the goats themselves. I originally had two horned pygoras and got rid of them after a couple of months because they were so brutal to my goats that didn’t have horns. The day that the wether hooked his horns under the belly of a pregnant doe and lifted her off the ground, I decided they had to go. Thankfully the doe was okay, but it felt like a matter of time before someone sustained a real injury. I have also had horned Shetland sheep, and several of them had problems because of their horns. One broke off a horn when he got it hooked behind a wooden fence. Another kept getting his horns caught in a woven wire fence, and one day the coyotes found him before we did. So, even though we don’t like it, we do disbud our goat kids for our safety, as well as theirs. Plus, I would be very upset if I ever sold a horned goat and later learned that someone had dehorned it, which leaves open wounds into the sinus cavity and can even cause death.

When I got goats in 2002, there were two options for disbudding goats — a disbudding iron or caustic paste, which is incorrectly named “dehorning paste.” Both burn the horn buds — one with extremely high heat and one with chemicals. The ingredients in the paste are calcium hydroxide and sodium hydroxide, which is lye. Even though everyone said that the iron was the only real viable option for goats, being the curious person that I am, I wanted to try the paste. We had used it on a calf once, and it worked fine.

I had been told that paste should not be used on goats because too much will eat through the skull, too little won’t work, and goat kids have been known to rub their head on their dam’s udder, causing damage from the paste. There have also been horror stories of kids rubbing it into their eyes, causing blindness. (Having splattered lye into my eye when making soap years ago, this seems especially horrifying to me now.)

Paste is commonly used on cattle. Since they have such a thick skull, no one worries about using too much. Before using it on a heifer, I sought the advice of my cattle mentor who told me to put a dab on each horn bud about the size of a quarter and put a piece of duct tape across her head, covering the horn buds, so that she couldn’t rub it off. That’s exactly what I did, and she didn’t seem the least bit bothered by it. I removed the tape a week later and saw pink skin where I had placed the paste. It had worked perfectly.

Our first year with goats we took the kids to a vet to have him disbud them. He gave them all an injection of something that just made them limp, so they couldn’t struggle, although they could still scream through the procedure. This is really not recommended, but I didn’t know better at the time. Looking back, the injection seemed pointless since the kids were still obviously in pain.

The next year I decided to try the paste on goats. The instructions for goats say to leave it on for only 30 minutes. I figured that my husband and I could each hold a goat for 30 minutes so that they couldn’t rub it into their eyes or onto another goat while the paste did its magic. After a few minutes, the kids started to scream intermittently. They continued to scream for the rest of the time the paste was on their heads. When we removed the paste, there was only minimal damage to some of the skin covering the horn bud. It had not come anywhere close to destroying the horn bud. There was no way we were going to try again with more paste for another half hour.

After my negative experience with paste on goats, we bought a disbudding iron and have been using that method ever since. We had carefully watched the vet disbud seven kids the first year, so we copied what he had done. Whenever we sell goats we tell the new owners that we will be happy to disbud the first kids born on their farm so they can learn how to do it.

Disbudding works great on does, assuming you use a large enough iron. We use the Rhinehart X-30 1/2″ goat tip. The pygmy tip is too small to burn enough of the horn bud, even on small goats. Bucks frequently get scurs, which are tiny bits of horn growth around the edge of the horn bud. To avoid this, many goat owners will move the disbudding iron around to burn a larger area. I don’t recommend using a Rhinehart X-50 for calves because that’s too large. That’s what the vet used on our first seven kids, and although six were fine, the upper eyelid on one kid was damaged because the iron came too close to the kid’s eye. I don’t know any goat owners who use a cattle iron, but we live in cattle country, so that’s the only disbudding iron the vet had, and I’m sure he thought he could control it well enough to avoid burning too much.

In all of my years online, I have only heard of one person burning through the skull of a goat kid, which is why I suggest only burning for a few seconds at a time. I cringe when I hear people say to hold the iron on the kid’s skull for ten seconds. Maybe that works for their iron, but it may be too long for an iron that gets hotter. We’ve disbudded hundreds of kids with zero fatalities or problems. When teaching people to disbud I say that you can always burn again for a few more seconds, but if you burn too long and go through the skull, you don’t get a second chance.

Injecting clove oil into the horn bud is a third option that popped up in a published study in 2015. After reading about the experiences of many people trying this, including some vets, I can’t bring myself to subject my goats to it. The process is simply too new and has not been studied enough to provide specific instructions. When people on social media argue about their success and failures, those for whom the procedure worked will nitpick the procedure followed by those whose efforts failed. Was the essential oil injected into the horn bud or under it? At what angle? How deep? Yet, the original study simply says, “In groups 1, 2 and 3, 0.2 mL of clove essence and in group 4 (Control) 0.2 mL of normal saline was injected into the left horn bud of goat kids.” It is important to note that failure does not simply mean that horns grew. In some cases it means that a kid died. If something as minuscule as depth or angle of injection can mean the difference between success and death, this is not a technique I want to try.

People will also argue about the purity of the essential oils used, yet all brands have had their successes and failures. People will then argue that a failure with a “good” oil involved a mistake in technique. Since most companies in this country don’t share their analysis of active ingredient reports, it is likely that strength of active ingredients varies from one batch to another, even within the same company. After all, no one is marketing their oil as a disbudding oil.

It is worth noting that in the original study, which was done in Iran, the researchers purchased cloves at the local market and distilled their own clove oil, which was then tested to determine the strength of the active ingredients. Since the researchers had one hundred percent success in stopping horn growth with clove oil, and they did not offer any specifics about injecting technique, angle, depth, and so on, the strength of their oil was probably stronger than what is typically available in this country.

Which technique is best?

I don’t usually make a specific recommendation on practices. It seems like my answer to just about every question is “it depends.” But in this case, there is only one proven option that has a long history of success in goats. If you want to stop horn growth, a disbudding iron is the safest option with the highest success rate.

Thrifty Homesteader is a participant in the Amazon Services LLC Associates Program, an affiliate advertising program designed to provide a means for sites to earn advertising fees by advertising and linking to amazon.com. You pay the same price when you purchase through affiliate links as you would if you went directly to Amazon, and our site earns a small commission, so by shopping through our links, you are helping to support our blog so that we can continue to provide you with free content.
602 shares
602 shares