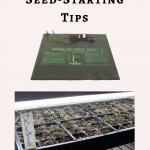 When a seed costs only pennies and a transplant costs a buck or two, you don’t have to be a math wiz to know that you can save big bucks by starting your seeds from scratch. But how exactly do you get started?

A lot of people ask if they have to buy organic seeds to avoid those that are genetically modified, and the answer is no. Organic seeds are definitely not genetically modified, but organic also means that they came from plants that were grown organically. Conventional seeds were probably grown with pesticides, herbicides, and other chemicals, but since the seed is such a tiny part of the final plant, some people will buy conventional seeds and grow them organically to save money. (Organic seeds cost more.)

If you purchase genetically modified seeds, you will have to sign a “stewardship agreement,” which is a really long contract with lots of tiny print that includes the promise that you will not save seeds for replanting in the future because the seeds are the intellectual property of the company that developed them. A regular seed company won’t ask you to sign a contract with tons of tiny print, so that’s a dead giveaway that you’re dealing with genetically-modified seeds.

Check out “Your First Garden” course
No green thumb required!

Seeds should not be started in dirt because it gets rock hard, which makes it challenging for seeds to sprout. Most soil starting mixes are based on either peat moss or coir. Both have their ecological advantages and disadvantages. Peat moss is not considered a renewable resource by some who worry that the peat bogs in the northern US and Canada are being destroyed. Coir comes from coconuts, on the other hand, which must be shipped from halfway around the world. Both work equally well as a seed-starting medium. If you buy a “seed-starting mix,” check the label to see what else it includes because it may include synthetic fertilizers.

What kind of pots?

Plastic pots are the most expensive option, and they are not exactly environmentally friendly. The tiny little pots made specifically for seed starting are thin and can’t usually be used more than once, meaning you have to buy new ones every year and throw the old ones in the trash.

Peat pots are made of peat moss and were my favorite for years. Since they are pressed from peat, you simply place the whole lower half of the plant, including the pot, into the ground when it’s time to transplant. The roots grow through the peat pot and into the ground, and in a month or so, you don’t even see the pot.

You can make homemade pots with newspaper by wrapping them around a dixie cup and taping up the bottom or creating a little origami pot, but some people worry about what’s in the ink. It’s pretty unlikely that your local newspaper is using an environmentally friendly soy-based ink.

Paper egg carton can also be used for seed starting. Like peat pots, they can placed directly into the ground and will decompose over a few weeks as the roots grow out into the ground.

A soil blocker is similar to peat pots in that there is no waste. Unlike peat pots, which have to be purchased every year, you buy a soil blocker once, and you can use it for years and years to make blocks of soil where you plant your seeds.

Do you need lights?

Yes! If you have a south-facing window that gets excellent sun every day, you may be able to get away without lights. However, once I bought some fluorescent shop lights and strung them up above shelves for seed starting, I won’t go back. My dining room used to be completely taken over the seed starting, and now I have a spot in my basement where there are four shelves, each with a shop light hanging above it. Two seed trays fit on each shelf, and that’s where I start my seeds. The lights are on a timer, so the plants get 14 hours of sun every day.

Do you need a heat mat?

Yes! This was a game changer for me! For years, I failed miserably at starting seeds until I finally decided to buy a couple of heat mats. And, BOOM! I became a seed starting maven. Even though I start eight trays, I only have the two heat mats because they are only needed until the seeds germinate. So, I start two trays at a time. As the seeds sprout, I move those trays off the mats and start two more.

Because the heat mat was such a game changer for me, I contacted the nice people at Johnny’s and asked if they’d give one to one of my readers, and they said yes when this post was originally published. (The giveaway has now ended.)

Enroll in “Your First Garden” course

Are you ready to start your first garden? Check out >> A Beginner’s Guide to Gardening

You may be wondering if you can use last year’s seeds in the garden if you bought more than you planted. Check out >> Can I Use Seeds from Last Year?

52 thoughts on “Save a Fortune by Starting Your Own Seeds”

Thrifty Homesteader is a participant in the Amazon Services LLC Associates Program, an affiliate advertising program designed to provide a means for sites to earn advertising fees by advertising and linking to amazon.com. You pay the same price when you purchase through affiliate links as you would if you went directly to Amazon, and our site earns a small commission, so by shopping through our links, you are helping to support our blog so that we can continue to provide you with free content.
272 shares
272 shares