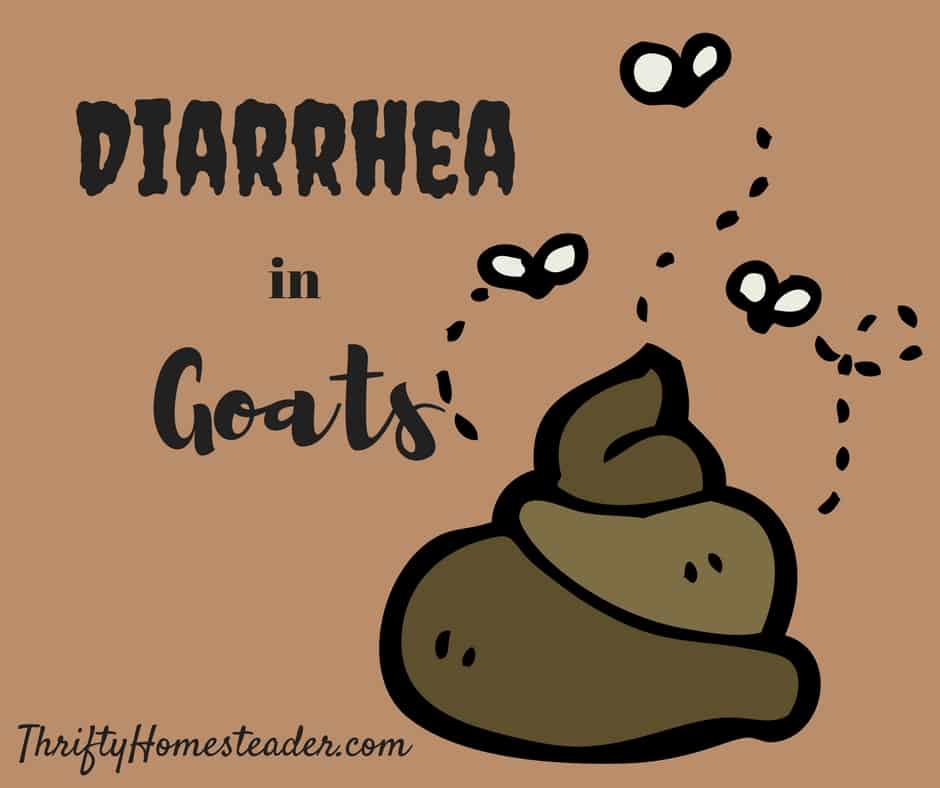 It’s not unusual to see someone asking for advice on social media, simply saying that their goat has diarrhea. Unfortunately, that’s not an easy question to answer because there are a couple dozen possible causes. In the fourth edition of Diseases of the Goat, author John Matthews has a 28-page chapter entitled “Diarrhea,” which should give you an idea that this is not exactly a simple problem.

Broadly speaking, it can be caused by viruses, bacteria, protozoa, worms, stress, toxic substances, and diet. The following list is nowhere close to being complete, but it includes the most common causes of diarrhea.

Many people refer to grain as “goat crack,” meaning that it is so addictive goats will eat it until they kill themselves. In our early years of goat ownership, our goats busted into the chicken grain more times than I can remember. Luckily the worst thing that ever happened to any of them was diarrhea for about twelve hours, which cleared up on its own.

Then there was the time that we had a LaMancha that produced so much milk, I couldn’t get her milked out fast enough, and she wound up consuming so much grain that she got diarrhea. (That’s when I started mixing in alfalfa pellets!)

And I’ll never forget the time that we were at a goat show and decided to let our bottle kids have as much milk as they wanted. That’s a super embarrassing way to discover that too much milk causes diarrhea. (We had no way to keep the milk cold, so we were going to have to dump whatever we didn’t use, so it seemed a better idea to just let the kids have it. Right? Wrong!) Here is more information on bottle-feeding baby goats.

The only time I ever had a goat get diarrhea from stress was when we picked up three kids in Massachusetts and were about half an hour into our drive home to Illinois. Did I mention that the kids were in dog crates in the car? Yeah, that was stinky.

It’s usually pretty obvious what’s happening if a goat is stressed out. Most do not suffer quietly when stressed, so you’ll have a good idea that the diarrhea is caused by stress.

The most common cause of diarrhea in goat kids more than 3 weeks old is coccidiosis. It is treated with over-the-counter oral meds. Amprolium (Corid) or sulfa drugs, such as sulfamethazine, sulfadimethoxine (Albon) are most commonly used once a day for five days. If you start treatment for coccidiosis, and you don’t see any improvement within a couple of days, you need to get a fecal to get a definitive diagnosis.

Other possibilities are giardia, clostridum, salmonella, and yersinia, and you can’t tell by looking at the poop with the naked eye. Although many people think coccidiosis is unavoidable, it can usually be prevented with good management.

If a kid gets diarrhea at less than three weeks, then it’s probably caused by either too much milk or an infection. I never say never, but it’s highly unusual for a kid to get too much milk when dam raised. It’s only happened here twice in 700 kids.

Most adults have coccidia in their digestive system and don’t have a problem with it, so diarrhea in adults is rarely caused by coccidiosis. You don’t usually see a problem with coccidiosis in adults unless the goat is already sick with something else and the stress of that illness has lowered their immune system. The only adult goat here that has ever been treated for coccidiosis was one that almost bled to death after kidding and spent a week at the vet hospital, so her immune system as obviously under a lot of stress.

Diarrhea in adult goats is really unusual, but one of the more common causes is worms, which can also cause diarrhea in kids. Barber pole, which causes anemia in goats, does not usually cause diarrhea. However, a goat may have more than one type of worm at a time.

Basically, a goat with worms may have diarrhea or anemia or both. Swelling under the jaw (bottle jaw) may also be a symptom of worms, as well as a poor body condition score.

There are several over-the-counter oral drugs available to treat worms, but like antibiotics, you should only use them when absolutely necessary in order to avoid dewormer resistance.

I’ve heard far too many people assume their goat can’t have worms because they recently treated with a dewormer. However, if they use a dewormer frequently, the worms could be resistant to the dewormer. This topic is definitely opening up a proverbial can of worms because I’ve written several blog posts about worms, including this one about preventing parasites. 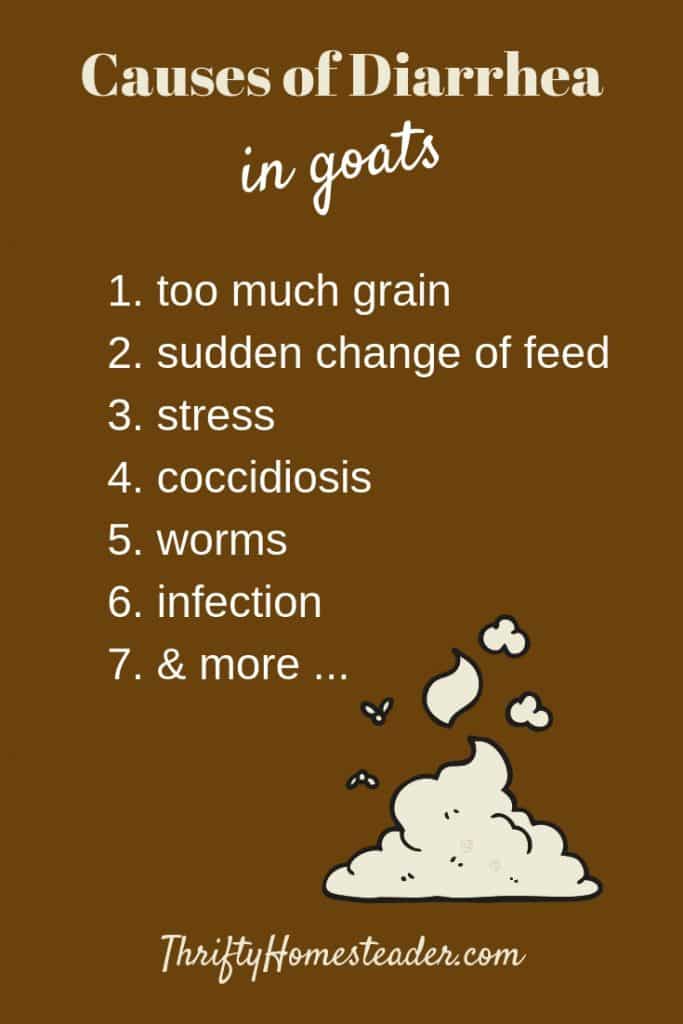 At the ADGA conference in 2017, I picked up a couple of interesting tidbits, such as heating colostrum above 135 degrees will cause diarrhea in kids, and some drugs can cause diarrhea. In addition to that, there are the 28 pages of diarrhea information in the book I mentioned earlier.

Because diarrhea can kill goats, especially kids, by dehydrating them, it’s important to figure out what is causing the diarrhea and begin treatment as soon as possible to treat the actual cause — not just the symptom. 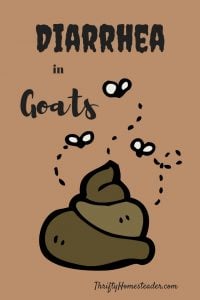 I have never given my goats any type of anti-diarrhea medication because they don’t do anything to address the cause of the diarrhea. Just because the diarrhea stops does not mean that you’ve cured the goat. If a goat ate something that disagreed with it, the diarrhea will stop even if you do nothing.

If a goat seems otherwise healthy and happy and is in great body condition, I will usually wait to see if the diarrhea has stopped by the next morning. If not, I look at other symptoms and treat for coccidiosis or worms. In my herd, that has always done the trick.

However, if I had a goat that did not improve with treatment, I would take a fecal sample to the vet to get a definitive diagnosis so the goat could be properly treated.

This post includes an affiliate link. That means that if you purchase something after clicking on the link, we will get a small commission while you pay exactly the same as you otherwise would. It’s one way we can continue to bring you free content, such as this blog post.

144 thoughts on “Diarrhea in Goats”

Thrifty Homesteader is a participant in the Amazon Services LLC Associates Program, an affiliate advertising program designed to provide a means for sites to earn advertising fees by advertising and linking to amazon.com. You pay the same price when you purchase through affiliate links as you would if you went directly to Amazon, and our site earns a small commission, so by shopping through our links, you are helping to support our blog so that we can continue to provide you with free content.
1255 shares
1255 shares