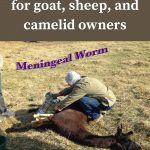 Over the past dozen growing seasons on our farm in Illinois, I’ve come to truly appreciate the first few freezes in the fall because I know it means that problems with internal parasites in our animals will soon be winding down. A good freeze can dramatically reduce the number of viable larvae on the pasture, so problems like barber pole worm (Haemonchus contortus) become a non-problem until spring when the pastures thaw.

However, fall is the time when goat, sheep and camelid owners start to see problems with meningeal worm (Parelaphostrongylus tenuis). Unlike intestinal worms, which go to work in an animal’s stomach or intestines as soon as it is ingested by the animal, the meningeal worm takes awhile to reach its destination, which is the spinal cord or brain. Sometimes called deer worm or m-worm, its usual host is the white tail deer, and it doesn’t really bother the deer much. However, it wreaks havoc in aberrant hosts, such as goats, sheep, and camelids (llamas and alpacas), as well as wild animals, including other deer species and even elk, moose, caribou, and antelope. Because it can take a couple of months to reach the spinal column or brain, most cases of m-worm are seen in the fall or early winter, even though the animal actually ingested the larvae in the summer. Why are animals usually infected in summer?

Want to learn more?
Check out my “Parasites in Goats” course

You may be familiar with tapeworms, which require an intermediate host to infect an animal. Tapeworms infect dogs via fleas. The goat species of tapeworm infects them through a pasture mite. The m-worm also needs an intermediate host, which is a snail or slug. The deer poops on the pasture, and the snail or slug crawls over the poop, which contains m-worm eggs, which are absorbed into the snail or slug and will remain in that little critter for the rest of its life. When the snail or slug is hanging out on a blade of grass or a leaf and is accidentally eaten by a goat or llama, the eater will then be infected by the worm. Some researchers also say that snails and slugs will shed eggs in their slime trail.

If you’re familiar with the concept of rotational grazing with mixed species, you may be wondering why a deer worm is able to infect other species. Most parasites are species specific, which is why using different animals for grazing the same pasture usually “cleans up” the pasture. If a cow or pig eats larvae of a worm that infects goats, that larvae simply dies in the intestines of the cow or pig because it’s a foreign environment for the parasite. It would be like a human trying to live on Mars. We can’t do it. In most cases, the m-worm can’t survive in an aberrant host either. Goats and sheep tend to be highly resistant. Llamas and alpacas are less resistant, so m-worm infection is more common with them.

This fall we had the misfortune of having two goats and a llama infected with m-worm. All of them had different symptoms, which is not uncommon. A week before Thanksgiving we found a goat lying in the middle of a snowy pasture one morning. Other than being unable to stand (and having hypothermia initially) it didn’t appear that there was anything wrong with her. She had a great appetite and was her usual cheerful self. We assumed she had suffered some type of spinal cord injury because lameness was her only symptom. A week later, there was a llama that was down in the pasture, but she had no appetite and didn’t even want to drink. Once we lifted her to her feet, she was able to walk some, but she kept crossing her hind legs. Five days later, we found a second goat down. When we lifted her, she could stand as long as she was leaning against something. She completely ignored food and water and was twisting her head to her right side. When she tried to take a few steps, she would move in a circle before falling down, which is a classic symptom of listeriosis. We initially thought she was blind because she had a blank stare, but her eyes did respond to us flicking our fingers at them. The eyeballs also quivered from side to side, which is called nystagmus.

M-worm is usually diagnosed based upon symptoms, although they can be very similar to other diseases and conditions, such as listeriosis and a spinal cord injury, as already mentioned. Other conditions that have similar symptoms are thiamine deficiency, goat polio, copper deficiency, foot rot, scrapie, and rabies. A spinal tap can sometimes help with diagnosis. Spinal fluid is normally crystal clear, so if you can’t read through a vial of the spinal fluid, it means something is wrong. If an analysis of the fluid reveals the presence of eosinophils, m-worm is likely the culprit. A definitive diagnosis can be made on necropsy.

Early diagnosis and treatment provides the best hope for survival of an infected animal. Because the worm is damaging the host’s spinal column and brain, the longer it lives, the more damage it does. Even one m-worm can eventually kill an animal simply because of where it is located, unlike intestinal worms, which may number in the millions. Intestinal worms either consume the food in the animal’s digestive system or they attach themselves to the lining of the animal’s stomach and drink its blood, so if you can simply kill the worms, the animal can usually recover. Repairing spinal cord damage or brain damage, however, is much more challenging and sometimes impossible. Recovery rates can be as low as 10-20%, especially when treatment is started too late or when an animal is already down.

Treatment consists of giving both fenbendazole and ivermectin for five days to kill the worms. In addition to giving the dewormers at unusually high doses, the animal must also be treated for inflammation that will occur when the worms start to die. A long list of side effects and reactions, such as seizures, can occur during treatment, which is why it would be challenging to treat at home. Once they began treating our llama, she needed additional treatment to deal with high blood sugar and ketones in her urine. Her paralysis actually got worse, and she was unable to urinate or defecate on her own for more than a week, so the vet put in a urinary catheter, and feces had to be manually removed.

If an animal is paralyzed, it is important to have them on deeply bedded straw and change their position regularly to avoid urine scald and skin damage from pressure. It is better to have them propped up on their belly with legs tucked underneath rather than laying on their side with legs straight out.

A vaccine for meningeal worm does not currently exist. Because m-worm is so difficult to treat, prevention is important. Remember it takes both the deer and snails or slugs to complete the worm’s life cycle and infect a goat, sheep, or camelid. People had asked me in the past if I was worried about m-worm infecting my goats that grazed around our pond. However, in almost twelve years, we’ve never had a problem. Why? It could be because chickens, geese, turkeys, and ducks forage around our pond, so snails and slugs probably don’t have a chance to become abundant. However, because our pond is quite literally in our backyard, deer stay away. Livestock guardian dogs may also help keep deer away. I know our dogs go nuts barking long before I even notice deer far off in the distance.

Some llama and alpaca breeders give a dewormer (either fenbendazole or ivermectin) monthly during the summer when snails and slugs are more prevalent, but this is a losing proposition with goats and sheep. Giving a dewormer every month will results in the barber pole worm becoming resistant to those dewormers, and they are a much greater risk to small ruminant health than m-worm. Thousands of goats and sheep now die every year from intestinal worms because of dewormer resistance.

My first reaction was that we would never put goats back there again. But after thinking about it for a couple of weeks, I’ve decided that we will put bucks in that area. Because most goats are resistant to m-worm, it only makes sense to use bucks that are resistant so that they will hopefully pass on those genetics to their kids.

If you live in an area that has an abundance of deer that get into your pasture, you may want to consider deer-proof fencing, which is either 8-foot tall fencing, or a double fence, which is perimeter fence that is a few feet away from the other fence. Because deer need a running start to jump a fence, they can’t jump into your pasture if they first jump another fence that simply lands them in a small lane of fencing. The only way they can get out of that lane is to run to the end and jump out and away from your pasture.

Because goats, sheep, and camelids are a dead-end host for the m-worm, you don’t have to worry about them giving it to other animals in your herd or flock. The worm does not reproduce in these animals, and because it is not living in the digestive tract, it would not be leaving eggs in the feces, even if it did try to reproduce.

Unlike intestinal worms that are destroyed by freezing, larvae from meningeal worms don’t seem to be bothered by cold temperatures. In one experiment, larvae survived on lettuce leaves at -4 degrees Fahrenheit for seven days! That’s when the experiment ended, but since most of us don’t live somewhere that stays that cold for a week, it would have been pointless to continue. The simple fact is that we can’t count on winter to destroy the m-worm larvae that is on the pasture.

Enroll in my “Parasites in Goats” course
Learn How to Identify, Solve, and Prevent Parasite Problems

Since many people have been asking what happened to Katy, I wrote this post — Making the Hard Decisions.

You can also learn more about deer worm in goats by listening to my podcast interview with Dr. Tatiana Stanton, a goat and sheep specialist with Cornell University Extension. She is talking about how deer worm is different than intestinal worms that goats have, symptoms of an infection, and treatment.

76 thoughts on “M-worm: A Nightmare for Goat, Sheep, and Camelid Owners”

Thrifty Homesteader is a participant in the Amazon Services LLC Associates Program, an affiliate advertising program designed to provide a means for sites to earn advertising fees by advertising and linking to amazon.com. You pay the same price when you purchase through affiliate links as you would if you went directly to Amazon, and our site earns a small commission, so by shopping through our links, you are helping to support our blog so that we can continue to provide you with free content.
1252 shares
1252 shares