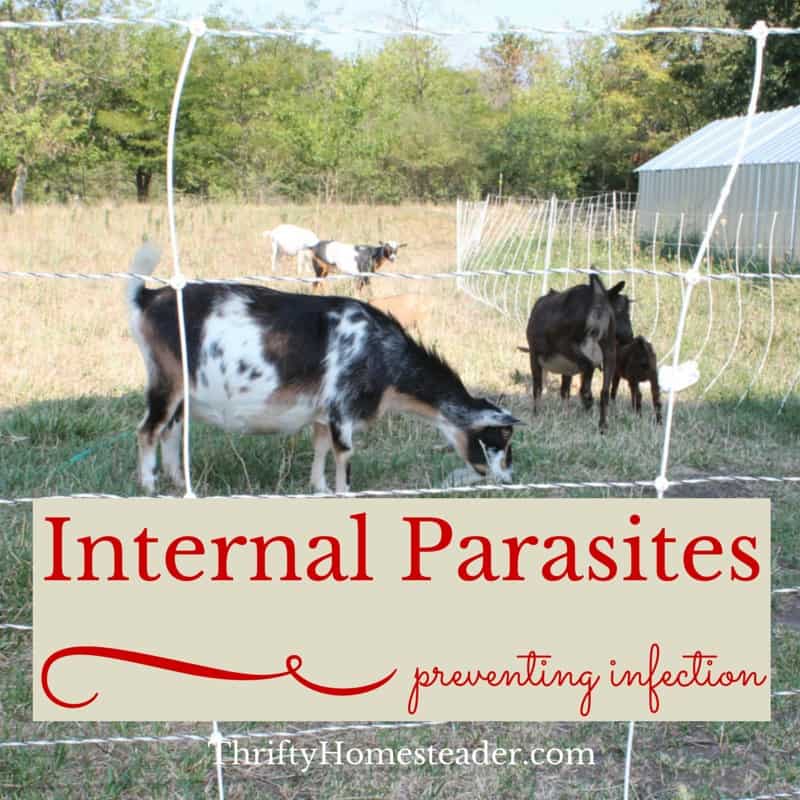 If fighting internal parasites with dewormers is ultimately a losing battle, what can you do to keep your goats healthy and productive? There are a number of environmental controls that can be utilized to eliminate parasite problems almost entirely. If goats needed dewormers to survive, they would have all become extinct before dewormers were invented. Many of the following ideas are not new, simply rediscovered from the era before drugs were developed. There was an old Scottish shepherd’s saying that one should “never let the church bell strike thrice on the same pasture,” meaning that sheep should be moved to new pasture at least every couple of weeks.

Pasture rotation is one of the most important management tools you have in preventing parasite problems. Worms and coccidia can contaminate a pasture and cause continual reinfestation of goats eating the grass. The shorter the time goats spend on pasture before being moved to fresh ground and the longer they stay off previously grazed pasture, the fewer parasite problems you will have. For example, if you could give goats a clean pasture every day and never put them back on any section for a full year, you would probably never have any parasite problems. Of course, few people have that much pasture or the time to rotate their goats every day, especially if they have a large herd, which may require the help of several people to move. Ideally, goats should be moved off a piece of grass within five to seven days and should not return to that spot for six weeks. However, the more often you can move them and the longer they can stay off of a piece of ground, the better.

Weather plays a big role in the rotation schedule. If temperatures are above 95°F and it is very dry, you will be able to leave goats on a piece of pasture much longer than if it is 70°F and raining every other day. You can usually let goats graze in a pasture until you get at least 1/2 inch of rain, which provides the perfect environment for larvae to thrive. When temperatures are in the upper 90s, you can probably let a pasture rest for as little as five or six weeks. However, keeping goats off pasture for at least three months in more moderate temperatures is necessary to help prevent ingestion of worm larvae left on the pasture during the previous grazing period.

Height of grass is an important consideration when goats are on pasture. Because most larvae are on the lower 2 or 3 inches of grass, it is a good idea to move goats to the next pasture when the grass is about 5 or 6 inches tall in their current pasture and definitely by the time it is grazed down to 4 inches. Early in the grazing season, some varieties of grass may not get very tall, so you will have to move goats to fresh pasture sooner than you will have to later in the grazing season. This is one reason it is better to create many smaller paddocks and move goats more frequently. Goats in a very large pasture will completely ignore some areas and overgraze others, and the longer the goats are there, the worse the problem gets. Young grass is tender and sweet; taller grass begins to grow tough and becomes less appetizing. Sections of untouched grass can be mistaken for an abundance of grass in the pasture, but unfortunately, goats will keep going back to the grass that is extremely short and covered with infective larvae.

Integrating other species such as poultry, horses, cattle, or pigs into the pasture rotation can help you utilize pasture more effectively than if you only have one species. Grass is at its most nutritious about thirty days after it was last grazed or cut, but that is also when larvae tend to be at the most highly infective stage. However, horses, cattle, and pigs are not susceptible to worms that infect goats and are able to digest the larvae. In other words, cattle, horses, and pigs can clean up a pasture, making it safe for goats to graze sooner than would otherwise be safe. Using sheep, alpacas, or llamas is not effective, however, because some goat worms can also infect them.

Providing goats with areas to browse is also an effective tool for controlling parasites. Goats have a much harder time dealing with parasites than sheep and cattle because as mentioned earlier, goats have not been grazers throughout history, like sheep and cattle. Although goats will eat grass, they are browsers and prefer to eat small trees and shrubs, which have no parasite larvae on them.

It might be tempting to keep goats on a dry lot or in a barn to avoid grass and the inevitable parasites on it. However, when goats are kept inside, the bedding needs to be kept cleaner than you would expect, in order to avoid coccidiosis in kids. If a stall is too dirty for you to sit down in, it isn’t clean enough for kids. A dry lot needs to be large enough that there isn’t a build-up of manure in it. Even in a dry lot a goat can become infected when it sticks its head through the fence to eat the grass that has been infected by other goats pooping along the fence line. Also keep in mind that not all parasites need grass. Intestinal thread worm (Strongyloides papillosus) can hatch in bedding or soil and infect a goat through its skin, although it is not a common parasite. 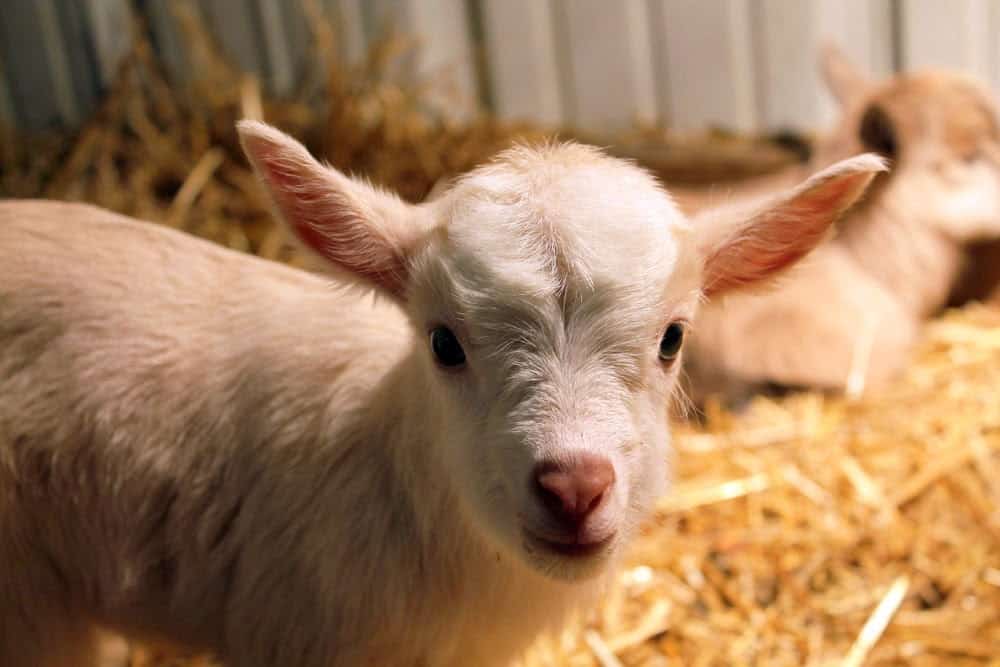 It has been a common practice for many years for goat breeders to give a chemical dewormer to every doe as soon as she kids. An increase in worm load is thought to be a normal part of freshening, and the dose of dewormer at that time has been considered unavoidable. However, some breeders are starting to question this practice and are waiting to deworm until they see that a doe truly needs it. There is no doubt that some does have an increase in parasite load after kidding and they do require a chemical dewormer. There are alternatives for some goats, though.

Most of my goats do not require dewormer after kidding if they give birth in January or February when parasites on the pasture are frozen or in late summer or early fall. If they give birth between March and June, however, the odds are not in their favor. July is variable based upon whether it is a dry or rainy summer. A number of breeders and researchers have begun to make similar observations about avoiding dewormers by timing kidding so that does are not freshening when parasites are at their highest level on the pasture. Keep in mind that the ideal time for kidding can vary from one location to another, depending upon your weather.

In addition to traditional herbs, there are a variety of tannin-producing plants such as sericea lespedeza, birdsfoot trefoil, and chicory that have been shown to reduce parasite loads. These are plants that grow wild in many places but can also be planted in your pasture. However, it is not as simple as seeing a few of these plants growing in the pasture and assuming that you don’t have to worry about parasites. Sericea lespedeza is the most studied of the natural anthelmintics, and it has been shown to reduce parasite levels at varying degrees. Goats grazing on fields of lespedeza daily have been shown to have no parasite problems. However, as their grazing time decreases, the parasite problems increase. There are currently no solid recommendations for how much lespedeza goats need to consume to control parasites.

As you have probably realized by now, there is no magic bullet. Controlling parasites has to be a multipronged approach. And just when you think you have it figured out, things can change. This is why it is important that you understand the life cycle of the parasites, rather than simply memorizing a particular deworming protocol. An unusually mild winter or wet spring can make problems worse by providing the perfect environment for larvae to survive on pasture for an extended period of time. A drought may improve the problem by drying up the larvae on pasture. Raising goats sustainably doesn’t mean substituting a natural dewormer for a chemical one. It means creating a management plan and an environment in which goats can thrive with the fewest external inputs from humans.

To learn more, read my post about dewormer resistance.

Thrifty Homesteader is a participant in the Amazon Services LLC Associates Program, an affiliate advertising program designed to provide a means for sites to earn advertising fees by advertising and linking to amazon.com. You pay the same price when you purchase through affiliate links as you would if you went directly to Amazon, and our site earns a small commission, so by shopping through our links, you are helping to support our blog so that we can continue to provide you with free content.
1297 shares
1297 shares