Parasites are the leading cause of death in goats. Although people usually think of intestinal worms immediately, coccidia are intestinal protozoa that can cause death in kids, as well as diarrhea and overall poor body condition. Just as over-reliance on drugs has caused problems with dewormer resistance, some people are seeing drug-resistant coccidia. In both cases, this happens because people use drugs more often than is needed or they use drugs rather than management to keep their goats healthy.

Want to learn more?
Check out my “Parasites in Goats” course

With only three types of drugs available to treat coccidiosis — sulfa drugs, amprolium, and toltrazuril — it is not hard to find yourself with a resistance problem. Like other health issues, including worms, you will never be able to get control of it by only using drugs. You need a coccidia prevention plan based upon management.

First, you have to eliminate the source of infection as much as possible. All adults have some level of coccidia in their intestines. Kids get infected when they nibble on soiled bedding, hay, or other food. This is why many people who bottle-feed will house all kids separately from adults. Even then, coccidiosis is a common occurrence in most herds with bottle-fed kids. It can be spread from adult areas to kid areas on the bottom of your shoes because stepping on poop in unavoidable.

Years ago when one of my mentors tried to impress upon me the importance of a clean barn, I thought she was nuts. Seriously, how can you keep a barn totally clean? I cringe when I think of what my barn bedding used to look like — lots of exposed goat berries. Today, I tell all of our interns that if they don’t think a stall is clean enough for them to sit in, it needs more straw. In other words, cover up all the exposed poop.

Since goats poop little berries, most of it slips through the straw. You don’t wind up with a lot being exposed if you give it daily attention. Depending upon how many goats are in a stall overnight, we usually need to add one or two flakes of straw every day or two. If you have lots of poop all over the bedding every morning, you either need more bedding or you simply have too many goats in that space.

Second, kids need the antibodies in their mother’s milk because they are born with a very immature immune system. I’ve heard far too many people talk about cutting back on bottles or separating kids from their mother nightly when they are only a few weeks old.

They assume that since the kid is eating hay or grain, they don’t need the milk that much. That’s just not true. Milk has an entirely different nutrient profile than other foods. It contains easily digestible protein and calcium for their fast-growing bodies.

A well-fed kid will increase its birth weight three to ten times by the time it’s two months old, depending upon breed. The larger breeds don’t seem to multiply their weight as much as smaller breeds. My Nigerian dwarf kids grow from 2 – 4 pounds to 17 – 24 pounds, increasing their birth weight by seven to ten times in two months, while my friend with Kikos only sees her goats triple or quadruple their birth weight by the time she weans at three months. But milk is far more than simply a way to get nutrients into a kid. It’s the cornerstone of good health.

When I was new to goats, I gave kids a maximum of 24 ounces of raw milk a day because that was the most common practice at the time. Through years of experimentation, I’ve learned that Nigerian dwarf kids do best if they’re getting 32 to 36 ounces a day of raw milk either with mom or in a bottle.

If bottle-feeding baby goats, you need to split this into three or four bottles throughout the day to avoid diarrhea. People who want to get kids down to only two bottles a day as quickly as possible wind up giving the kids less milk than they need because kids will get diarrhea if they drink too much milk in a single bottle.

At 24 ounces a day, kids will grow well, but you might have a problem with coccidiosis. At 16 ounces, the kids’ growth will be slow, and they will have big problems with coccidiosis and worms. People who bottle-feed at that level or use milk replacer also start kids on coccidiostats at three weeks of age. This is why I don’t let a first freshener feed triplets (I bottle-feed one) and why a doe has to have a good milking history for me to even consider letting her raise quadruplets. Even then, I weigh the kids daily for the first two weeks and weekly for the first two months. For a Nigerian dwarf doe to adequately nourish triplets, she needs to produce at least 4 pounds a day (1/2 gallon) for good growth. The more she produces beyond that, the healthier the kids will be.

Weighing kids regularly is the key to overcoming coccidiosis problems in your herd. Since we started weighing kids daily in 2014, we have had one case of coccidiosis in a kid. And when helping others who have kids with challenging problems with coccidiosis, being underweight is always part of the picture.

Far too many people think they can eyeball their kids’ body condition to know they are getting enough milk. But when we started weighing kids, I discovered that the scale will tell me I have a problem long before my eyeballs and hands would have known. I want to see my ND kids gain an average of 4 ounces per day. If a kid is not hitting that target, we supplement them. No one has eyeballs or hands sensitive enough to be able to see that a kid is gaining only 2 ounces per day versus 4 ounces per day, yet that is the difference between merely surviving and thriving.

When I had this conversation with someone last year, she insisted that her doe had been successfully raising quads. I asked her to weigh them. She reported back that their weights varied from 14 to 24 pounds. Obviously, someone was getting way more than his fair share while his “little” sister was terribly under-nourished.

Also, after weighing kids regularly, I realized that I was not really happy with the idea of selling them if they were less than 20 pounds. For more than a decade I had followed the common practice of selling kids at two months, even though I sometimes worried about the kids because I just didn’t feel like they were big enough. But I had never heard anyone talk about using weight as guideline for weaning. However, it makes far more sense than simply picking a random date on the calendar. Virtually all of my kids do hit that 20-pound goal by 8 to 10 weeks of age, and I sleep much better at night after selling kids when they are 20 pounds or heavier.

Unfortunately, I get a lot of messages from people who have kids with chronic coccidiosis, which weigh only 10-15 pounds at three to four months of age. In this video, I show you some of the spreadsheets where we track kids’ weight gain, including quintuplets that doubled their weight before they were two weeks old and also hit that 20 pound mark by two months of age. 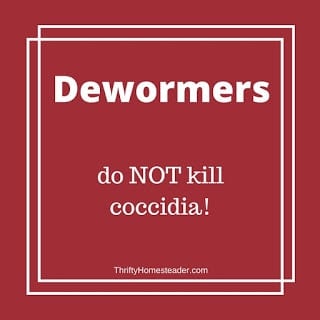 Stress is the third part of the coccidiosis picture. If goats are stressed by weaning or moving to a new farm, they are more likely to have a problem. For this reason, we never wean doelings that are staying on our farm. We separate them from their mothers overnight starting at two months of age so that we can milk the dam in the morning, but they spend the day on the pasture with each other. By doing this, we no longer have a problem with coccidiosis or worms in our doelings, and they usually grow fast enough to breed for kidding as yearlings.

Most of the drugs that are sold to treat coccidiosis also have instructions on the label providing dosages for using the drugs as a preventative. This is a bad idea because if you are giving one of those drugs, and your goats get coccidiosis in spite of it, then the coccidia is resistant to that drug.

Remember, there are only three different types of drugs in the US, so you need to avoid using them as much as possible. You want those drugs to work when you really need them. If you know you have a chronic problem, have not been able to get a handle on the management yet, and you want to use a chemical preventative, you can use a feed additive or medicated feed. These alternatives have a completely different mode of action than the drugs that are used to treat an active infection.

People often worry about kids dying from coccidiosis, but the reality is that a low-grade chronic infection can be just as devastating. It can do permanent damage to the intestines so that the goat will always have trouble absorbing nutrients and will never grow to its full potential.

As the saying goes, an ounce of prevention is worth a pound of cure. Years ago, seeing diarrhea-covered kids seemed an inevitable part of spring. But by changing our management practices, kids with coccidiosis have become the exception rather than the norm.

Thrifty Homesteader is a participant in the Amazon Services LLC Associates Program, an affiliate advertising program designed to provide a means for sites to earn advertising fees by advertising and linking to amazon.com. You pay the same price when you purchase through affiliate links as you would if you went directly to Amazon, and our site earns a small commission, so by shopping through our links, you are helping to support our blog so that we can continue to provide you with free content.
2113 shares
2113 shares