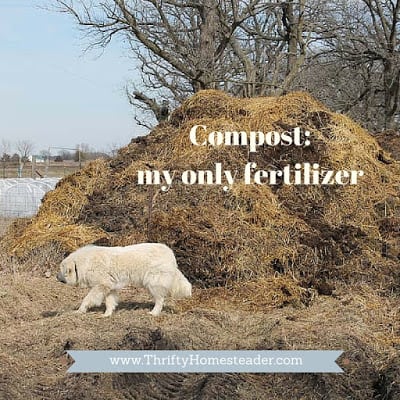 Most backyard gardeners use raised beds or dig up the dirt in the yard and plant directly in the soil. Because it is highly unlikely that your dirt will be suitable for growing anything other than a lawn, amendments are usually required. You could have your soil tested and buy exactly what you need and mix it in, or you could try what works well for so many of us gardeners who can’t be bothered with details—composting.

With all of the chemicals available for gardening and farming today, some people think composting is a new idea, but stuff has been rotting since the beginning of time. We know that at least a couple of hundred years ago, people realized that compost made plants grow better. George Washington, whose land at Mount Vernon was very heavy with clay, wrote extensively about using manure on his fields, and he had a “repository for dung” built near his stables where manure and other plant material was composted to be used as fertilizer. It is thought to be the first building erected for the purpose of making compost.

There is lots of science behind composting today, and you can get extremely technical with your carbon–nitrogen ratios. However, stuff rots. And stuff has lots of nutrients in it that will feed your plants and make them happy. This is all I knew about feeding my garden for several years, and it worked quite well. Then one year, because a large portion of my compost pile came from mucking out my goat barn, I wound up with the most amazing crop of thistle. I can’t imagine any weed that I want in my garden less than thistle. It is horribly invasive, has very deep roots, and is quite painful to touch, which makes natural eradication a challenge. I realized at this point that perhaps I needed to know a little more about compost, and that’s when I learned about the difference between hot and cold composting.

I had heard about hot and cold composting, but had no idea what either one meant. We would usually pile up the straw and manure when we cleaned out the barn because I’d heard the phrase “compost pile” and figured we should make a pile. Then I thought, why waste time piling it up and spreading it out later? Let’s just spread it out all over the garden from the beginning. It will rot; right? I conceived this brilliant idea right around the time that the thistle in the pasture had gone to seed, and goats love thistle, and seeds can survive the intestinal tract of a goat just fine. In fact, thistle seeds come out the other end in convenient little fertilizer pellets that can’t wait to grow into healthy thistle plants when given a little sunshine and rain. I learned the hard way that you need to hot compost if there are weed seeds in your compost pile.

This is where the left-brained gardener will start talking about carbon–nitrogen ratio, and if you are interested in that, you can certainly read what others have written about the perfect ratio. However, I’ve read about so many different perfect ratios that I don’t worry about getting it right. Besides, stuff has been rotting forever with no help from us humans. There is something more important than the carbon–nitrogen ratio, and it is not nearly as hard to figure out, which is good news for me because I’m not the kind of person who will weigh my garbage to make sure I have the perfect ratio. Your pile needs to be big enough to get hot. It needs to be at least three feet high and three feet wide, and bigger is better. If the pile is smaller, it may not get hot enough to kill the weed seeds, although everything else will rot eventually.

A commercial compost bin placed in a sunny location may not need to be that big because these bins are usually black plastic, which absorbs and traps heat from the sun. The downside to a bin, however, is that it is plastic, which has its own set of concerns for gardeners who are concerned about the environmental issues associated with plastic production and eventual disposal. Plastic compost bins represent an interesting irony, because although they are creating compost, which is sustainable, they are made from fossil fuel and will not decompose for centuries.

If you don’t want an open compost pile in your yard, you can create your own compost bin from repurposed building materials, such as cinder blocks, wire fencing, or wood. If you use wood, however, be sure it is not treated with chemicals, which could leach into your compost. Yes, untreated wood will rot eventually, but that’s why you are using repurposed wood rather than buying it new. It was destined for the landfill, and now it has a new purpose.

So, what do you do after you pile up the compost ingredients or fill your bin? Let it sit for a week or two, and if it heats up to 130°F–40°F, the temperature should have killed any molds, bacteria, and weed seeds. It won’t get that hot on the outer edges, so you need to turn the pile at some point so that all of the outside compost winds up at the bottom and middle of the new pile. How do you know it got hot enough? If you don’t have a thermometer that is about a foot long to stick into the pile, you can stick your hand in there, but be ready to pull it out quickly, because if it is 130°F, it will not be comfortable. If it is rather cold out, you may see steam rising off the pile, although this does not happen predictably.

Once you have cooked your compost, it is ready to use. It does not look like the compost you buy commercially, but it can be used in the garden at this point. In most cases, straw will still look like straw, and manure will still look like manure. If you let it sit in the bin longer and keep turning it, it will eventually look like the stuff they sell as compost. This could take anywhere from a month to six months, depending upon how often you turn it and how warm it is. If the temperature outdoors is colder, it tends to take longer to compost. However, I personally don’t care how it looks, so if I need it, I don’t hesitate to use it after it has passed that two-week cooking period.

I spread it out in a thin layer across my garden, mix it into the hole when transplanting things like tomatoes, and I also use it as mulch. If you are really motivated, you could dig it into your garden soil. If you have raised beds, you can fill them with 30 to 50 percent compost and mix it with topsoil, sand, peat moss, or coir. You can also throw in some vermiculite or perlite for good measure if you want.

This is an excerpt from Homegrown and Handmade: A Practical Guide to More Sustainable Living by Deborah Niemann.

Composting is one of the courses that is included in my Goats 365 membership.

1 thought on “Compost: my only fertilizer”

Thrifty Homesteader is a participant in the Amazon Services LLC Associates Program, an affiliate advertising program designed to provide a means for sites to earn advertising fees by advertising and linking to amazon.com. You pay the same price when you purchase through affiliate links as you would if you went directly to Amazon, and our site earns a small commission, so by shopping through our links, you are helping to support our blog so that we can continue to provide you with free content.
254 shares
254 shares