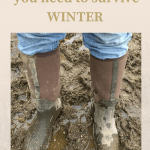 When we first moved to the country in 2002, I had no idea what I needed to survive the outdoors during winter. That first year, I was so cold because I wasn’t dressing properly for the weather. Over the years, I gradually started shopping more at the farm supply stores and less at the mall. Although it might seem that they have a lot of the same products, such as coats and socks, their insulating capabilities are vastly different. 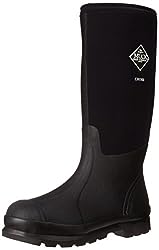 It took me more than 10 years to finally try The Original MuckBoots, and in no time, I felt so foolish for not trying them sooner. You might think they are anything but thrifty with a price tag of $100, but they are seriously worth every penny. They come in several varieties, such as Chore Boots or Wetland, which are meant to serve different needs. The Wetland are supposed to be more waterproof than the Chore Boots, so they cost more, but different family members have the different varieties, and we’ve found that the Chore Boots still do a great job of keeping your feet dry when going through puddles and mud. One thing that surprised me is how warm they are, because they don’t advertise them as being particularly warm. However, I discovered that they are actually warmer than my leather and fleece lined winter boots, which I no longer wear outside for chores in the winter. I use the MuckBoots twelve months a year as they are equally awesome in snow and mud. 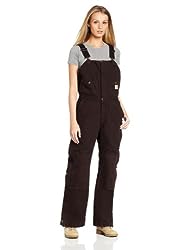 For too many years, I simply wore jeans or sweat pants with long underwear, assuming that it was the best way to keep warm. I would see other farmers wearing what I considered the ugliest puke-yellow coveralls and wondered why anyone would wear something so ugly. Then one day I went into Tractor Supply, and they had purple insulated overalls. Purple is my favorite color, so I decided to give them a try, and boy did I feel foolish. I immediately understood why people wore those ugly puke-yellow Carhartt’s! They’re warm! I raved about them so much that everyone in my family wanted to try them, and after wearing them outside just once, they were all asking for their own insulated overalls! Some of us have Schmidt and some have Carhartt, and both are great quality. 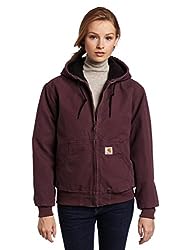 Once I discovered how warm the insulated overalls were, I decided to try one of the Schmidt coats, and it is indeed much warmer than the Liz Claiborne jacket that I purchased on clearance at the mall. However, the Schmidt coat is so thick that when doubled with the overalls, I am not very flexible, so I don’t wear it unless I really need it. The other great thing about these coats is that they have hoods, which I really like because I don’t always realized I need something on my head until I’m outside doing chores, and I don’t want to come back inside to get a hat.

When someone finally convinced me to try wool socks, I was immediately sold on the idea, but the ones I bought at the mall only lasted one season, so when I saw that Schmidt and Carhartt sold them at the farm supply store, I decided to try one pair of each. I was immediately a fan! Carhartt

makes some that are thicker than Schmidt, but they are so thick that you might need a pair of boots that are half a size larger than normal so that you don’t cut off blood supply to your foot. Small price to pay, however, to keep your feet warm when the temperatures are down to zero. Since the two different brands have different thicknesses, I have several pairs of each and only wear the thickest ones on the coldest days.

Of course, you need something to keep your hands warm. Unfortunately this is one area where I haven’t found any particular brand that I’m too excited about. Although the Schmidt gloves do keep my hands warmer, if my hands start to sweat at all, the inside of the gloves wind up wet, and they take a couple of days to dry. Of course, wet gloves are not warm, so that puts them out of commission for a couple of days.

Winter weather can be absolutely brutal for us humans on a farm, but if we’re wearing the warmest possible clothes, it can be more bearable.

How to care for your animals in winter 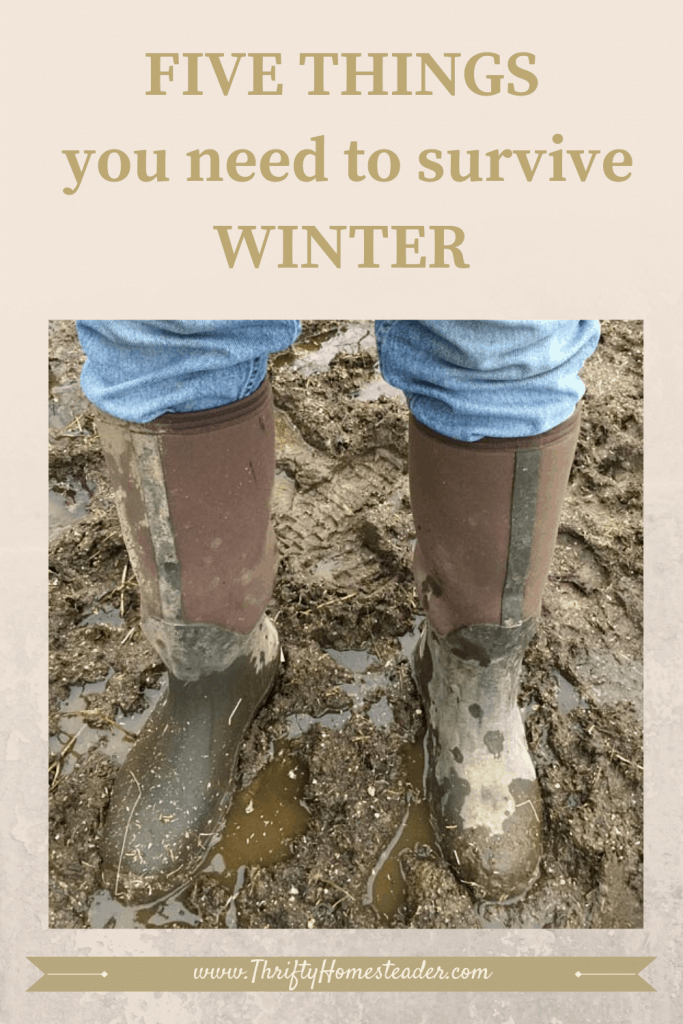 27 thoughts on “5 things you need to survive winter”

Thrifty Homesteader is a participant in the Amazon Services LLC Associates Program, an affiliate advertising program designed to provide a means for sites to earn advertising fees by advertising and linking to amazon.com. You pay the same price when you purchase through affiliate links as you would if you went directly to Amazon, and our site earns a small commission, so by shopping through our links, you are helping to support our blog so that we can continue to provide you with free content.
161 shares
161 shares