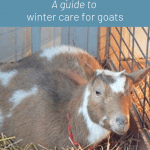 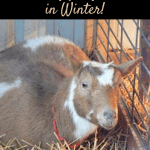 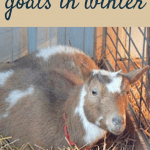 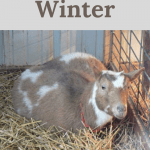 A common question this time of year is, “Can my goats handle the cold weather, or do they need a heat lamp or _________?” The funny thing is that these questions come from Florida and Canada and Alaska and everywhere in between.

In the vast majority of cases, if a human can handle the temperatures all bundled up, then a goat can handle the temperatures because they grow a thick undercoat of cashmere in winter. You may have noticed that your goats look fuzzier in winter — or maybe not if you’re in a warmer climate. Mine look quite fluffy in Illinois. Cashmere is so expensive because a single goat only produces a few ounces, although it’s extremely warm!

So, how cold is too cold?

I know a Canadian online who had temperatures at 30 below zero Fahrenheit, which is definitely a problem for babies. They need help staying warm at that temperature, and she lost a baby or two last year when it was that cold, and they lost power, so the heat lamps in their little warming huts were no longer working.

I’m in Illinois, and we have winter temperatures as low as 15 below zero, which the goats can handle with no problems. The only time I’ve had any issues with adults at that temperature was when they were giving birth. Twice when that happened, the does started shaking violently, so in addition to the heat lamps that I had waiting for the kids, I also covered the does — in one case with a towel, and in the other case, I put an old sweatshirt on her.

If you have kids when it’s below freezing, you need to be there to make sure they’re dried off as soon as possible, or their ears and tails can freeze. If it’s below 20 or if they’re outside and it’s windy — even at 40 degrees — they can also get hypothermia really fast and die. If a kid gets hypothermia, its sucking instinct is the first thing to go, so you’ll need to bring it inside and warm it up, which I usually do by laying it on a heating pad.

If the ears freeze, the frozen part will fall off, but ultimately they’re fine too. They just look funny. Unfortunately I learned from the Canadian woman online that when it’s so insanely cold, a baby goat’s feet can freeze, and if they fall off, the kid usually has to be put down.

As with chickens, goats need plenty of fresh air. Pneumonia is the second most common cause of death among goats, and it’s poor air quality that causes it.

Goats should actually be put outside every day unless you have really extreme weather, such as single digit wind chill or storm. Although our does come into the barn at night, our bucks live in three-sided shelters that are open to the south, and we make sure there is plenty of straw in there when it’s going to be getting below 20 degrees.

What about heat lamps?

The other thing to keep in mind is that heat lamps are the #1 cause of barn fires — and we almost had one here, but luckily my daughter walked in when it was still a small fire in the straw, and she was able to put it out with a bucket of water.

If you have temperatures below freezing, and you have newborn kids, be sure that your heat lamp is secured to the wall or something overhead and cannot be knocked down by a curious goat. Once the kids are a couple days old, they will be fine unless temperatures fall well below zero Fahrenheit.

If temps are below zero, a heat lamp in an open barn is not going to do much to keep goats warm because the heat will dissipate in only a foot or two of air when it’s that cold. Kids can cuddle up with each other in a dog crate with the door removed, or you can make a three-sided wooden box with a top where they can cuddle up together. A cardboard box doesn’t work because someone will jump on it and collapse it.

For my Nigerian dwarf kids, I use the sleeve of an old sweatshirt to make coats if temps are below zero. The wrist band becomes the collar; the seam runs under the kid’s belly, and I cut two little holes for the front leg. If you have a buckling, be sure to cut away enough of the coat under his belly so that he doesn’t pee on it.

The only thing I really do differently with my adult goats in cold weather is to give them warm water, which they really seem to love. All of them usually take a big drink every time I bring a new bucket of warm water to them.

So, as I said with the chickens, you don’t need an insulated or heated barn to keep goats in colder climates. They’ll do just fine with their warm cashmere coats down to temperatures as low as a human can survive with a warm coat.

If you have kids due in the middle of winter, check out this post on kidding in winter.

For more information about livestock in winter

86 thoughts on “Goats in Winter”

Thrifty Homesteader is a participant in the Amazon Services LLC Associates Program, an affiliate advertising program designed to provide a means for sites to earn advertising fees by advertising and linking to amazon.com. You pay the same price when you purchase through affiliate links as you would if you went directly to Amazon, and our site earns a small commission, so by shopping through our links, you are helping to support our blog so that we can continue to provide you with free content.
1287 shares
1287 shares