One of the hardest things for humans to understand is why goats are so mean to each other. And sometimes the goats that are the most outgoing towards humans are the roughest with other goats. They butt heads and slam their heads into other goats’ sides. It can be scary to those of us looking on and tends to be especially bad when a new goat is introduced to the herd.

For this reason, I try very hard never to add an individual goat to the herd. When goats have been separated for kidding, I put them into groups of three or four initially so the head butting gets spread around a little more than if only two goats were put together. 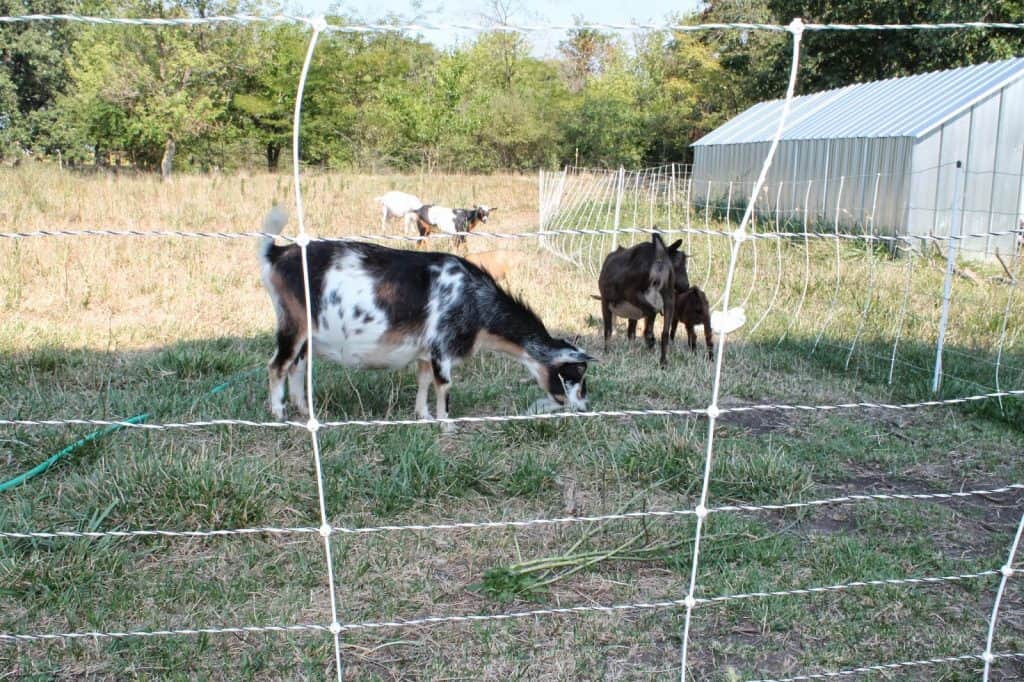 It is also important to be sure that you have plenty of space for all the goats to fit in front of hay feeders and feed pans. If the goats are crowded, the more dominant goats will get most of the feed.

When feeding grain in a pan, it is best to use a fence-line feeder rather than a pan in the middle of the pasture because goats will butt heads over the pan and often wind up running through the pan, knocking it over, and spilling the feed. If you already have feed pans, placing them next to a wall or in a corner will reduce head butting compared with placing them in a space where the goats can circle around the pans.

Usually, in spite of the severity of the head banging, no one gets hurt. Every now and again, a goat might wind up with a little blood on the top of its head, especially if it has scurs, but long-term injury is extremely rare.

In most cases one of the goats will give up and refuse to continue fighting, but I did have a buck wind up with a concussion once. I had owned goats for eight years when one night I saw two bucks butting heads at sundown. I ignored it because no one had ever been hurt in the past.

The next morning, however, the smaller buck was staggering around and stumbling, and his eyes were operating independently of each other, moving in different directions. Luckily, he did recover, but I no longer ignore bucks fighting.

Even scarier than bucks butting heads, however, are pregnant does fighting. In most cases goats will butt heads for a few minutes when first introduced, and once in a while they’ll hit each other with their heads if they want hay or grain that the other one is eating. But every year or two, there seems to be a doe that simply no one likes. They won’t let her have her share of hay, and sometimes they’ll even try to keep her out of the shelter. It can get especially scary if the underdog is pregnant. In those cases it’s a good idea to put her in a different pen with a younger doe as a companion.