Every spring I respond to multiple phone calls and emails from people who want a pet goat. They are unaware that goats are herd animals and need to have another caprine friend to be healthy and happy. Here are a few of the real life comments I’ve heard from people, as well as my responses:

I’d like to buy a pet goat. Do you have one for sale?

You should not have a single goat. In fact, I refuse to sell a single goat to anyone. I have had too many people contact me over the years desperate to find a second goat because someone else sold them a single goat that is now getting into trouble.

Goats are herd animals, which means they are not happy when alone. 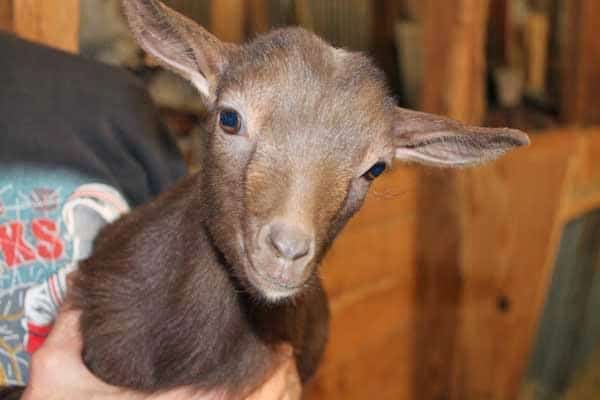 But we spend a lot of time with our animals.

There is simply no way that you could give enough attention to a goat to make it truly happy because even if you spend 8 hours a day with it, that leaves it alone for 16 hours.

But we plan to keep the goat in our house.

I have known people who kept a goat in their house, but those goats wound up nutrient deficient and very unhealthy because they were not able to eat a proper diet inside. Because goats have a rumen, they need to be eating for most of the day, which is why they need to be on pasture or in a barn where they can eat hay. It is very cheap to feed pet goats because they only need grass hay and whatever browse they can find in your pasture.

We were planning to keep our goat with our chickens, so it wouldn’t be alone.

Goats and chickens do not speak the same language any more than we do, so the goat would still be lonely. Would you be happy as the only human living with a flock of chickens forever? And you do not want your goats to be able to get to your chicken grain because they will overeat and best case, they will get diarrhea. Worse case, they will get bloat, enterotoxemia, or goat polio and die. No, you can’t train your goat to not eat chicken grain. 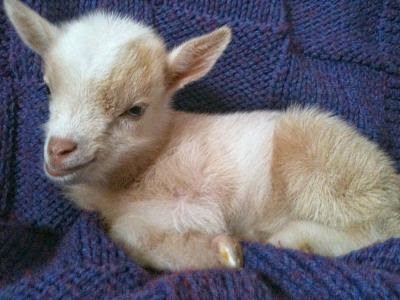 But we were going to keep the goat with our …

Unless you fill in that blank with the word “goat,” the answer is no. Goats and sheep do not even make good pasture companions because they don’t speak the same language. Goats rear up on their hind legs to butt heads, whereas sheep put their heads down and run towards their rival.

We use mixed species grazing, and sometimes our herd of goats share a pasture with chickens or pigs, but they pretty much ignore each other and don’t interact.

We also don’t have them sharing the pasture at feeding time, which could result in a fight between the pigs and goats, and the pigs would probably win because they bite when fighting.

But I know someone who had a pet goat and it was fine.

I’m not saying that there are not exceptions, but you won’t know that it doesn’t work until it’s too late — as in, your goat gets kicked across the pasture and killed by your horse or it gets out and gets hit by a car or …

I could go on and on. And once your goat has developed these bad habits, it will teach its tricks to the other goat if you finally buy a second one in desperation. It simply is not worth it to try because it usually doesn’t turn out positively. And there is no reason to have a lone goat.

But I don’t have time to take care of two goats.

The bucket of water has to be changed once a day because goats do not like dirty water, and three or four goats can drink from a 2-gallon bucket. The only thing that has to be done individually with goats is trimming their hooves every few months, and that only take about five minutes per goat.

I’m tired of mowing the lawn, so I thought a goat would take care of it for me.

Goats are actually browsers rather than grazers, so they would be much happier eating your rose bushes and hedges. They will eat grass if nothing else is available, but they won’t keep it uniformly trimmed across the yard. Some sections will be a foot high while others will be an inch, so it won’t look like it’s been mowed.

Please don’t. As pet goats have become more popular, it has become harder to find homes for the culls from dairy herds. We don’t need anyone breeding goats as pets. Dairy goats actually make great pets, because they are accustomed to being handled daily. Not every dairy goat is capable of being a great dairy goat, and when breeders cull their herds, they butcher the ones they can’t sell as pets or brush eaters.

Not every buck should remain a buck, so about 90-95% of them are castrated and butchered or sold as pets or brush eaters. If a doe does not grow large enough to safely breed, or if she doesn’t get pregnant after a few attempts, she will also be butchered if no one wants to buy her as a pet. The market for pet goats simply is not big enough to support those who simply want to breed pets.