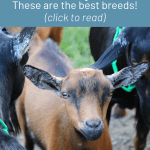 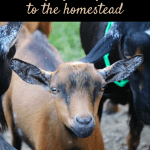 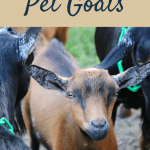 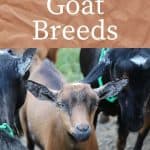 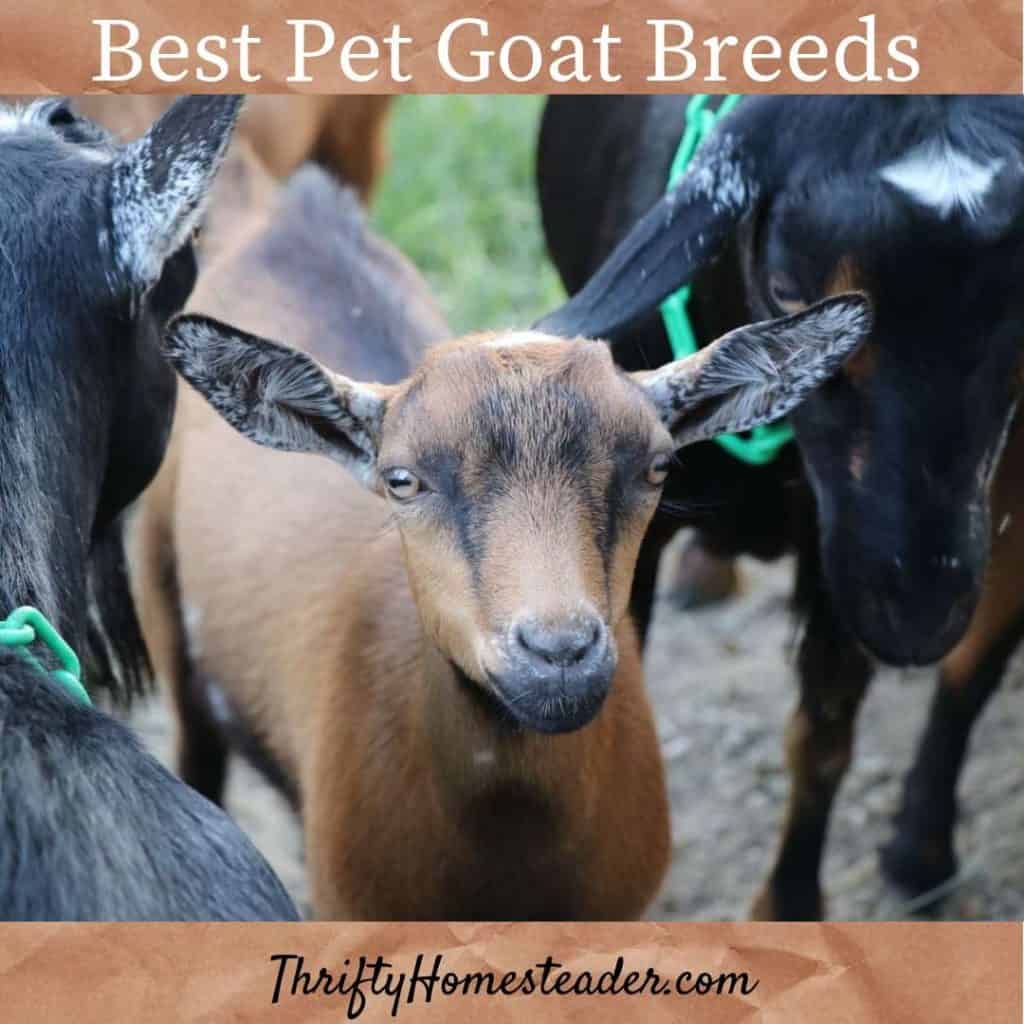 Although the smallest goat breeds often make great pets, some of the larger breeds are more docile. Nigerian dwarf goats, pygmies, and silkies, as well as crosses of these smaller breeds, are often chosen by people who just want a few pasture ornaments when they have a couple of acres.

I’ve also sold some to retirees who bought a place in the country and want a couple of goats for their grandchildren to play with when they come to visit. They assume that smaller goats will be a better option for small children, which is often true, but it is just one piece of the puzzle.

If you want to make a little cheese, then Nigerian dwarf goats are a good option because of their high butterfat. Since they are very popular as pets though, it is important to buy from someone who milks their goats to increase your odds of finding a good milker.

Far too many Nigerian breeders are now breeding for blue eyes and flashy colors, ignoring milk production. Keep in mind that your goat must give birth to make milk, and you need to have an idea about what to do with the kids that are born. You probably can’t keep all of them year after year.

If you want milk and are not opposed to the idea of butchering offspring, you might look into Kinders, which are a pygmy-Nubian hybrid. Although Nigerian meat is delicious, there isn’t much of it because the goats are not very big. Kinders are bigger than Nigerians but smaller than Nubians.

If you think it would be fun to teach a goat to pull a cart and like the idea of a larger breed, Saanens and Sables are quiet and surprisingly easy to handle for their size. Males can pull twice their weight while females should only pull a wagon equivalent to their weight. So, although Nigerians can be taught to pull a cart, they can’t pull as much weight as a larger goat.

The reality is that almost any goat breed can make good pets. I’ve known people who had boer or kiko wethers as pets, even though those are breeds raised primarily for meat.

Male or female goats as pets

Castrated males, called wethers, are the best pets for many reasons. Since they are not producing sperm, babies, or milk, wethers are very easy keepers and only need pasture in the summer, a good grass hay in winter, and free choice, loose minerals year round.

They do not need grain at all, and feeding it to them can cause urinary stones to form, which can kill them. Most of the people who contact me with a wether-related challenge are usually killing them with kindness and feeding them grain or alfalfa, neither of which they need, as well as treats.

Female goats can be good pets, but you may have trouble keeping them at a healthy weight. In nature they would be giving birth and making milk year-round, and if they don’t do that, they often get obese. Ironically, maiden does sometimes have shorter lives than those that kid annually.

A potential challenge with does as pets is that they will come into heat about every 21 days during the fall (and possibly other months, depending upon the breed). Sometimes this may mean that they butt heads with each other, and other months it may mean that one is screaming bloody murder. Here is more information on does in heat.

No, you can’t easily spay a goat like you can a dog. A goat hysterectomy is only done in extreme circumstances because it is actually a rather complicated surgery that costs $1,000 or more.

You absolutely do not want intact bucks as pets. I don’t normally tell my readers what they want, but seriously, who wants a pet that stinks and pees on his face and might even pee on you if you’re in the wrong place at the right time? And if that doesn’t sound bad enough, how would you feel if he peed on his face, then jumped on you and tried to lick you in the face? Yes, this is what bucks do. I love goats in spite of this! And I admit that I handle them as little as possible during breeding season when these hormonal urges are at their worst.

A reputable breeder will castrate male kids before selling them to you — and they will sell them at a fraction of the price of an intact buck. It only takes a few seconds to castrate a goat, so it doesn’t cost the breeder anything to provide this service. An intact buck will usually cost more because he can be used for breeding like a doe can.

A lot of people think that bottle-raised kids make better pets than those that are raised by their goat mother. The reality is that goats that are handled from birth make the best pets. Like cats, which will be feral if not handled from birth, goats can be on the wild side if they are ignored by humans when young.

If you bottle-feed, obviously you are handling the kids daily. However, they also think you are their mother. They don’t understand that they’re a goat. So you can wind up with a very bratty goat that jumps on people, nibbles on hair, rubs its head against you, and has other bad habits.

If you do get a bottle-raised kid, be sure that you do not allow any children to put their fingers anywhere near the goat’s mouth. They will suck on human fingers looking for milk, which seems to be really fun until the finger winds up between the molars and they bite down.

This happened one time when we took a couple of goats to visit a school. I couldn’t sleep for a week, worrying about getting sued by the bitten student’s parent. It’s been about ten years now, so I think I can stop worrying. But I never again took bottle babies to visit a school. You simply can’t supervise 20 children petting goats, so I’d rather not take goats that want to suck on fingers.

Another negative side to bottle babies is that since they think you are their mother, they will be the world’s best escape artists. In fact, I’m sure this is why so many people think that goats are hard to keep fenced in. Since we only bottle-feed when absolutely necessary, that means most of our kids are dam raised, and it’s quite obvious that the bottle babies are the ones who find the tiniest hole in the fence or crack between the gate and the fence post.

How old should pet goats be when sold?

Some of the saddest emails I receive are from people who were sold a kid that was taken away from its mother at a few weeks of age. Sometimes I receive these emails when a kid is on the verge of death and requires near heroic effort on the part of the owner who is already totally in love.

If kids are dam raised, they should not be taken away from their mother until they are 8 weeks of age at a minimum. If you take a 2-week-old kid away from its mother, it will scream like you’re trying to poison it if you try to give it a bottle. It has no idea what to do with a bottle at that age, if it’s never had one before. And then some people assume that means it’s not hungry, and within no time you have a kid that’s not growing or is dying from starvation.

I’ve been contacted by people with 2-month-old kids that they’ve had for a month and have gained almost no weight. A Nigerian at that age should be gaining 4 ounces a day on average! They may also have coccidiosis because their immune system is functioning so poorly due to being malnourished.

If you absolutely want bottle-fed kids, then only buy them if they have been bottle-fed from birth. If the seller tells you they have switched them to a bottle, then ask to see them give the kids a bottle. The kid should reach out, grab the nipple, and start sucking on its own. This is what a normal, healthy bottle babies does. If it doesn’t do this, don’t take it home.

One of the most important things you need to know before getting pet goats is that they are herd animals, so you can’t have just one, and here are 7 more things you should know before starting your pet goat adventure.

You should also know that this is a long-term commitment as goats can easily live for 12 or 13 years, and some live even longer.

For even more information, check out my Beginner’s Guide to Goats. 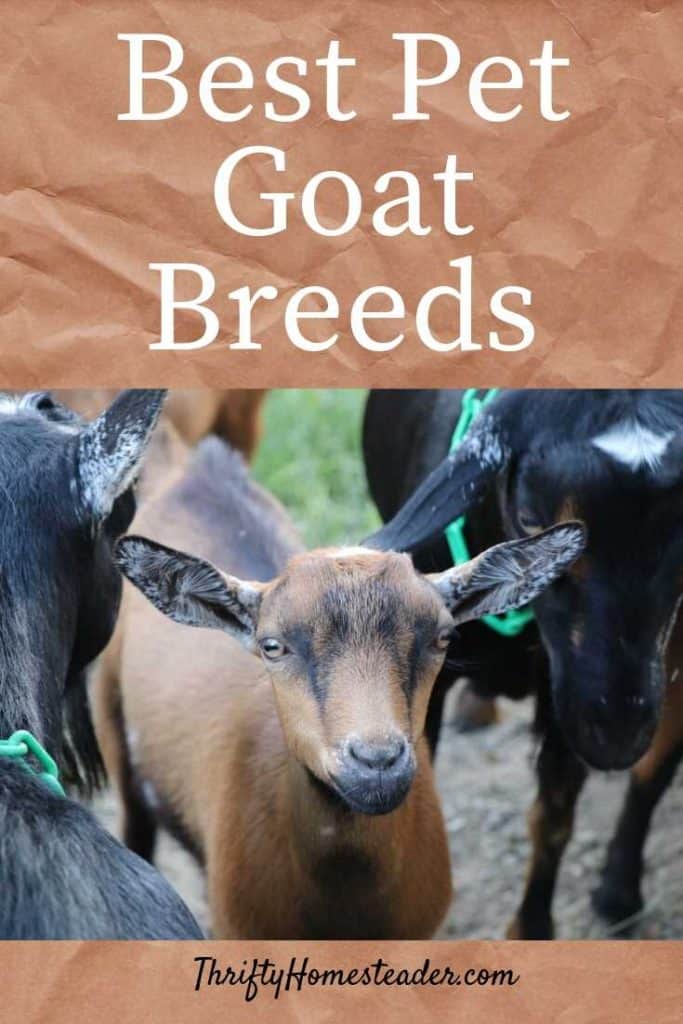 11 thoughts on “The Best Pet Goat Breeds — and more”

Thrifty Homesteader is a participant in the Amazon Services LLC Associates Program, an affiliate advertising program designed to provide a means for sites to earn advertising fees by advertising and linking to amazon.com. You pay the same price when you purchase through affiliate links as you would if you went directly to Amazon, and our site earns a small commission, so by shopping through our links, you are helping to support our blog so that we can continue to provide you with free content.
588 shares
588 shares