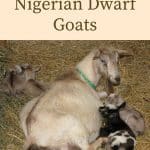 We started raising Nigerian dwarf goats in 2002. I was familiar with the Conservation Priority List of the Livestock Conservancy, and I wanted all of our animals to come from that list because I wanted to help preserve rare breeds. The Nigerian and Oberhasli were the only two dairy goats on the list back then, so I didn’t have much to choose from.

I can’t honestly say I remember all of my original reasons for choosing the Nigerian dwarf goat, but it’s a decision I have never regretted. In fact, after we started showing goats, and we were exposed to other breeds, my daughters and I considered adding just about every other dairy breed out there at one time or another, and we did have LaManchas for about seven years. So, why do we still have Nigerian dwarf goats after all these years?

When I realized I needed to downsize after my daughters left home, there were two reasons that I kept the Nigerian dwarf goats and sold off the LaManchas. Size played a huge role in my decision to sell the LMs. Although they are the sweetest goats, we don’t always agree, and when there is a disagreement, it’s tough to win when the goat weighs almost as much as I do.

I am able to pick up almost every full-grown Nigerian dwarf goat on the farm, if needed. Female goats (does) weigh about 60 pounds with male goats (bucks and wethers) weighing about 70 pounds. And if I can’t lift them, then my son or husband can. They’ve even picked up a fully pregnant goat and put her in my car to take to the vet hospital for a c-section.

Because of their small size, they can easily be transported in large or extra large dog crates, which fit in SUVs and mini-vans. My LMs were on the smaller side, so they could also fit into extra large crates, but some breeds would require the giant size, which is expensive and doesn’t fit inside most vehicles.

Over the years I’ve sold many Nigerian dwarf goats to people who had small children and felt the smaller goats would be easier for them to handle. I’ve also sold some to older people who had a larger breed and were downsizing to the Nigerians for that reason.

In fact, we only made cheese with the LM milk a few times because we realized the yield was almost always about half as much as what we would get when making cheese with ND milk.

The first thing that popped into my head was that the LM milk was “watered down.” The LM was definitely producing a lot more milk, but if your goal was to make cheese, the extra fluid milk was really not helpful.

If your goal is maximum fluid milk production, and you prefer the taste and texture of skim milk, then you may view the Nigerian’s high butterfat as a disadvantage.

How much milk do Nigerian dwarf goats produce?

You will find a lot of sources quote a quart a day as the average, but there is a lot more to the story! Goats produce milk on a curve. Their production starts out pretty low and increases gradually over the course of 6-8 weeks, plateaus for a bit then starts to very gradually go down. At their peak, excellent milkers make about 3 quarts a day, and I expect at least half a gallon a day, which is what is required for a doe to feed twins successfully. Many goats will plateau at about a quart a day around three to four months and stay there for a year or more, if they are not rebred.

None of us was ever a big fan of the LaMancha milk or any other goat milk that we tasted other than Nigerian dwarf goat milk. In all my years of selling goats, I’ve never lost a goat sale because someone didn’t like the taste of the milk. In fact, most people are surprised and excited about how much they love the taste.

Some have said it tastes just like store-bought milk, while some say that it tastes even better. I personally prefer Nigerian dwarf goat milk to cow milk. People hypothesize that the high butterfat makes the milk taste sweeter than other goat milk, but whatever the reason, it’s definitely my favorite.

Although I didn’t think the LaMancha milk tasted bad, one of my daughters strongly disliked it, and I could not even trick her into consuming it when it was used in a gravy or other foods. She’d catch me every time! Obviously taste is a personal preference, and there are people who prefer the milk of other breeds.

If your goat milks tastes great sometimes but funky at other times, check out my podcast episode where we discuss goaty-tasting milk, as well as does that seem to be holding back their milk.

Some people look at the Nigerian’s small size and just assume that it would be difficult to milk them, but that’s not true. I admit I spent at least a year complaining about the short teats, but that’s because I just had not perfected my technique.

After learning how to milk my Nigerian dwarf goats, I actually found them easier to milk than the LMs. And it is not always true that every Nigerian has smaller teats than standard size goats. We have had some goats with excellent teats. It is also important to note that orifice size, udder texture, and shape of the teat are just as important, if not more important, than the length of the teat.

If people want milk and meat, they are not likely to consider NDs, but Nigerian dwarf goat meat is delicious! If you wanted to start a goat meat business, you should probably consider a larger breed, but if you simply want to have some goat meat for your family, you can butcher extra males.

The other side of Nigerian dwarf goats

One of the things I don’t like about Nigerian dwarf goats is something that many people love, and that’s their tendency to have litters of kids rather than simply twins like other breeds. We have had three does that have given birth to quintuplets a total of eight times, and we’ve had more quadruplets than I can remember at this point. I’ve also sold two does that went on to have six at their new home.

This is highly genetic, however, and it is possible to select for or against this trait. A few years ago, I said I was going to sell off or retire the lines that throw the high multiples because it was too stressful for me, but I haven’t had the nerve to actually do it. Of course, some of my favorite does had quints after I said that!

Does only have two teats, so in addition to her production, you also have to consider her personality and the personality of the kids. Mom will have to spend a lot of time standing, and those kids will fight for the two teats, sometimes leaving a smaller or less aggressive kid to starve. This is why I rarely let a doe try to raise more than three kids now. (Here’s a post where you can learn more about how many kids a doe can feed.)

Although Nigerian dwarf goats were rare when I got started in 2002, today they are the fastest growing breed for all of the reasons I’ve mentioned so far. The high kid count has also made them a prime target for people who want to make a fast buck, leading to goat versions of puppy mills where people breed the does twice a year rather than once, and they never milk them, which means their ability to be a good milk goat is unknown.

This means there are many low-quality Nigerian dwarf goats on the market today. This makes it challenging for those buying their first goats. It’s really important that buyers looking for milk goats ask about milk production of does and stay away from buying kids whose dams have not been milked. Here are more tips on buying goats.

Which breed is best?

Regardless of which breed you choose, keep in mind that this is a long term commitment. Nigerian goat lifespan is about as long as dogs. Female goats live about 12-14 years, although I’ve had one live to 15 and another live to 16 years. Intact male goats (bucks) usually only live about 9 or 10 years, whereas I’ve heard of castrated males (wethers) living into their upper teens.

For more information on other goat breeds:

Want to see a comparison of all of the goat breeds side by side in a spreadsheet, from milk production averages to appearance?

28 thoughts on “Nigerian Dwarf Goats: Why We Still Love Them After 20 Years!”

Thrifty Homesteader is a participant in the Amazon Services LLC Associates Program, an affiliate advertising program designed to provide a means for sites to earn advertising fees by advertising and linking to amazon.com. You pay the same price when you purchase through affiliate links as you would if you went directly to Amazon, and our site earns a small commission, so by shopping through our links, you are helping to support our blog so that we can continue to provide you with free content.
2330 shares
2330 shares