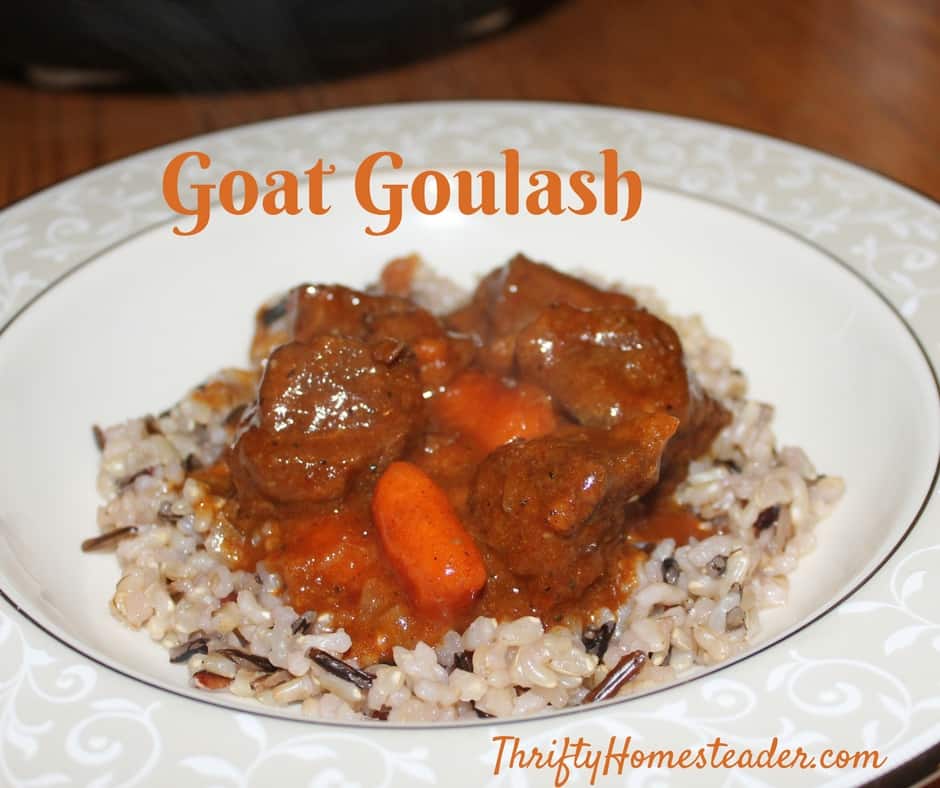 We have fallen in love with goat meat all over again, and it’s all because of a goat we called Horny Dude. Time for true confessions here. In the fall of 2016, a doe gave birth to a single buckling, and she was the only goat to give birth that fall. About a month later, I was teaching a goat class, and someone asked, “When are you going to disbud that goat?” I looked to where the person was pointing and saw the one-month-old buckling with little horns peaking through the hair on top of his head. I gasped. Then I calmly responded, “Well, that’s what happens when you have a doe give birth in the fall when no one else does, so you’ve totally forgotten about the need to disbud kids.”

Later that day I told my husband about the little buck. There was no way we were going to attempt to disbud a buckling with little horns. That would have been far too traumatic for him and us. The other down side to being the lone kid born in the fall is that there was no companion I could sell with him to a pet home after he was wethered.

It’s been a few years since the last time we’ve had goat meat, and I had forgotten how delicious and mildly flavored milk-fed goat tasted. If you’ve ever had goat meat that was tough and stringy and had a very strong flavor, that was an old goat. We tried eating an old goat several times, and it gave all of us terrible indigestion.

Few people eat Nigerian dwarf goat meat. Since they are so small, most people view ND wethers as pets. (But it’s worth noting that pygmies were originally raised as meat goats before they became a pet breed because of their small size.) It may not seem that ND goats would be worth the trouble to butcher because of their small size. However, like quail, some of the tastiest meats can come from small animals. Horny Dude had a hanging weight of 39 pounds, which was actually better than our spring lambs, so he was totally worth the effort and cost to take to the locker.

As we processed our last Jersey steer this fall, we also made the decision to stop raising our own beef. We have a friend who raises organic pastured Belted Galloway cattle, and I plan to purchase beef from him. But I’m not a really huge fan of beef, which is one reason I don’t want to continue dealing with cattle, which are quite large and more challenging to handle. In fact, I prefer milk-fed goat, so we’ll just keep a few wethers each year to use for our own goat meat. Unless we plan to continue milking a kid’s dam through the next year, we’ll butcher him in the fall while he’s still nursing because we prefer the taste of the meat when the kid is still consuming some milk. 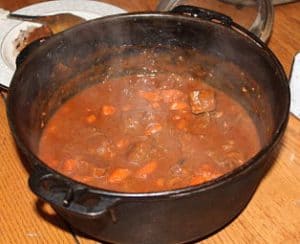 One of the first recipes I pulled out after bringing home the meat from the locker was the Goat Goulash recipe that’s in my book, Raising Goats Naturally. The only problem with this recipe is that it’s easy for me to overeat as my taste buds scream, “More, more!” and my stomach is screaming, “Stop, you fool!” But that’s a small price to pay for a delicious homegrown meal. 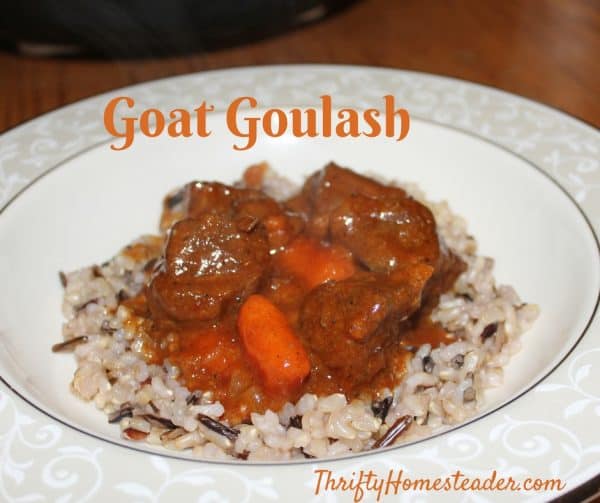 To make this recipe gluten-free, you can use rice flour or oat flour in place of unbleached when making the gravy.

The one hour bake time assumes you are using meat from a young goat. If you buy "goat stew meat" from a store, it will need to be cooked longer. Check it about every 20-30 minutes, and if you can't tear it apart with a fork, continue to cook it. Add water as necessary to keep it from drying out.

This post contains affiliate links. That means that if you purchase something after clicking on the link, we’ll receive a small percentage while you pay exactly the same price as you otherwise would. It’s one of the things that helps us continue to provide you with free content weekly.