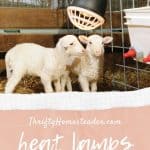 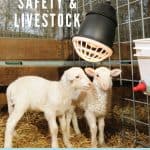 Every winter I see articles like this about a barn fire or other structure that burns down because of a heat lamp. In fact, we almost had two fires here because of heat lamps. Yeah, not just one, but two!

Many years ago we had a heat lamp hanging on a nail, and the goats knocked it down. That was definitely a rookie mistake made by someone who had no clue how curious goats can be. The straw caught on fire. Luckily my daughter saw smoke coming out of the barn, so she was able to put the fire out before any serious damage was done or goats were injured or killed.

Then we almost had a fire in our basement. We were brooding chicks, and we had the heat lamp hanging on a broom handle. The broom went across the top of the box, with the broom snugged up against one side, and the handle hanging over the other end of the box by at least two feet. I fiddled with the setup for a bit before deciding that there was no way the heat lamp could wind up in the box. I was wrong. We had been keeping the basement door closed because we weren’t sure how our young dog would react to the chicks. Luckily, I happened to see that the door was open about a foot, so I immediately went running downstairs, worried that the dog might have killed the chicks. The chicks were fine, but the dog had knocked the end of the broom handle into the box, which meant the heat lamp had slid down and was now in contact with the paper towel and cardboard box, which already was turning brown and smoking.

I redoubled my efforts to figure out how to attach heat lamps so that they couldn’t possibly be knocked down, but I kept using the same metal heat lamps because I didn’t know there was anything out there that was safer. It was obvious that having two wires across the bulb in the shape of an X really did nothing to keep the bulb from coming in contact with bedding and igniting it. Why hadn’t anyone created anything safer?

One cold January I was asked to speak at a sheep and goat workshop. One of the other speakers was talking about housing, which included a slide on heat lamps. He had a picture of an orange and white heat lamp that I had never seen before. He said it was made by Premier 1 Supplies and that it’s the only type of heat lamp that he uses. Why? Because a few years earlier he had lost all of his lambs and most of his sheep to a barn fire. I get goose bumps just writing this. I still remember how his voice cracked as he told the story of losing all those sheep. Of course, I thought about how devastated I would be if I lost all of my goats. I went home and ordered my first heat lamp from Premier.

As soon as I received it, I realized why it was so much safer than the cheap metal ones. The housing for the bulb is much bigger, so the bulb can’t come in contact with bedding. Plus the cover is a grid — rather than two wires in the shape of an X. The best feature is that it’s top heavy, so if it got knocked down, it would land on its side. The bulb would not be facing the bedding. So, even if you made a rookie mistake like I did years ago, it would be highly unlikely to start a fire. (But remember, I made that mistake so you don’t have to — so do NOT hang your heat lamp from a nail!)

This is the only type of heat lamp that I buy now. We use it for newborn kids, piglets, and brooding chicks. It’s also the only heat lamp that I recommend, and I have never heard anyone say anything negative about it. I can’t say that about hardly anything related to farming or homesteading. It seems that the answer to everything is, “It depends.” The only way I could use that phrase when it comes to heat lamps would be if I said something rude like, “Well, it depends on how badly you want to avoid a barn fire. If you really don’t want a fire, I’d use the heat lamp from Premier.”

It should go without saying, but you still need to use common sense when using this heat lamp. Definitely keep it out of reach of animals so they can’t butt it or ram it or chew on the cord or anything like that. And do not just hang it on a nail like I did years ago. I always use a carabiner clip attached to an eye hook that’s screwed into wood.

If you want to know more about their heat lamp (which is now black and white), click here for lots of pictures and videos. That’s another thing I love about the company. Their customer service is outstanding. Because they actually raise sheep and goats, they have lots of practical knowledge about their products. They actually develop the products that they need in their own operation.

Thrifty Homesteader is a participant in the Amazon Services LLC Associates Program, an affiliate advertising program designed to provide a means for sites to earn advertising fees by advertising and linking to amazon.com. You pay the same price when you purchase through affiliate links as you would if you went directly to Amazon, and our site earns a small commission, so by shopping through our links, you are helping to support our blog so that we can continue to provide you with free content.
435 shares
435 shares