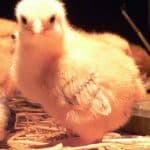 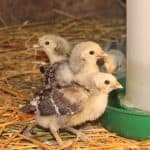 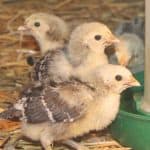 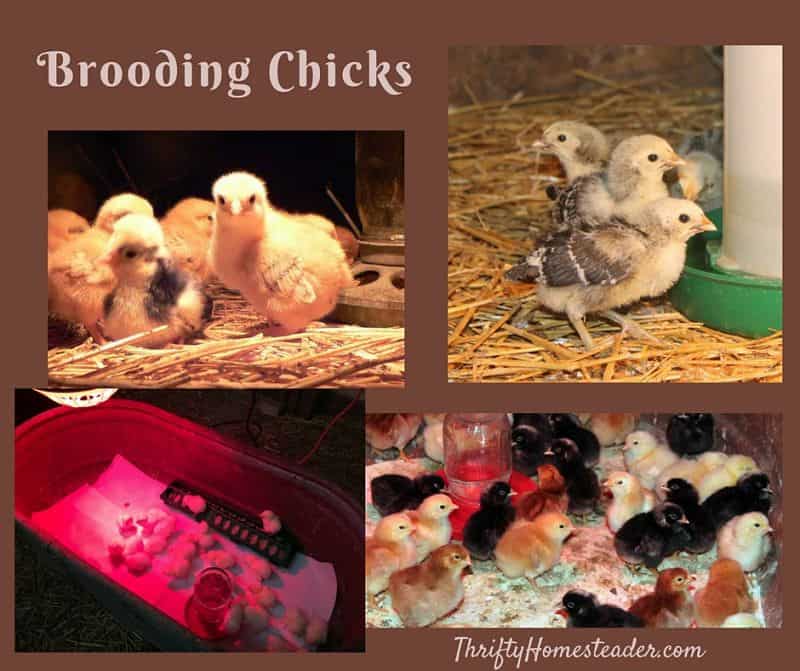 When you pick up your first chicks, they will need to stay in a brooder for several weeks. If a mother hen had hatched them, they would spend most of their time under her wings, being kept warm by her body heat. Because they were hatched in an incubator, you need to duplicate that warm environment by creating a brooder. “Brooder” is a fancy word for what could simply be a cardboard box with a heat lamp hanging over it. You can buy expensive professional brooders, and you can find lots of fancy homemade brooder plans online, but the chicks do not care how fancy or professionally built the brooder is. They just need a home that will keep them warm until they are feathered out and can control their body temperature.

If you are getting twenty-five chicks or fewer, you can start them in a box, a plastic bin, or an old water trough. It should be at least three feet wide if you have more than seven or eight chicks, but it really should not be less than two feet wide, even if you have only a few chicks. The bigger the box is, the more room you have for error with the heat lamp. If you put the chicks in a small box and the heat lamp is too close, you could easily overheat them, causing death. Ideally, you will have the temperature in the brooder regulated before the chicks arrive.

Most poultry books tell you to use a red heat lamp or the chicks will fight with each other. We have used clear lamps more often than not, and we have never had trouble with any type of poultry fighting, except for peafowl and pheasants, and I doubt the light had anything to do with it. Pheasants have such a reputation for fighting that most people put blinders on them to keep them from killing each other.

A brooder that is located in an area that is accessible to dogs or cats needs to have a cover that is pet-proof. Hardware cloth (wire mesh that has very small spacing) or chicken wire is excellent for covering a brooder. To protect the chicks from cats or small dogs, attach the hardware cloth or chicken wire to a wooden frame that fits over the edges of the box. To be safe from larger dogs, it is best to have the chicks in an area the dogs cannot access, because dogs can knock over the box or collapse a wire lid.

To complete your brooder you will need a feeder and a waterer for the chicks. Although you could technically repurpose a tuna fish can for chick feed and water, it is not the best idea. The chicks will walk right through it or fall in it, which will make for messy feed and could cause hypothermia, leading to death. Chicks need to be dried off and warmed up immediately after they fall into the water or attempt to walk through it. Chick feeders and waterers provide a cleaner and safer alternative and are available at most farm supply stores and through multiple sources online.

Whether you pick up your chicks at the post office or a local farm store, you will probably be bringing them home in a box. Have the brooder ready before you leave to get them. Make sure the temperature is regulated, paper towel covers the bottom of the brooder, feed is sprinkled on the paper towel, and a waterer is on one end. When you get home with the chicks, take them to the brooder right away, especially if it is in the middle of winter, so they can get warmed up. As you remove each chick from the box, dip the beak into water to get it started drinking before setting it on the floor of the brooder under the heat lamp. The chicks may initially huddle together if they have become chilled on their journey, but if the brooder is warm enough, they should start to move around within a few minutes.

The chicks will start to poop within minutes, christening their new home, and you may be tempted to constantly change the paper towels. Once a day is enough, and you can throw the used ones in your compost pile or worm bin. After a couple of days, when everyone is eating well, you can put wood shavings in the brooder rather than paper towels, but you will need to set the feeder and waterer on top of wooden blocks. The closer they are to the wood shavings, the more shavings will wind up in them.

Each week, the temperature in the brooder can go down by five degrees. If a mother hen were raising them, they would be spending longer stretches of their day out foraging before going back under her body to warm up. So, after one week, raise the heat lamp a little. The textbooks say that chicks need 95°F at hatching, then 90°F at one week, 85°F at two weeks, 80°F at three weeks, and so on until they are fully feathered out at six weeks, when they supposedly do not need a heat lamp any longer. In reality, if it is below freezing when the chicks are six weeks old, you should not remove the heat lamp because cold chicks will pile on top of each other for warmth. Once the pile is three or four chicks deep, the ones on the bottom will be crushed or suffocate.

As the chicks grow and start to get crowded in their brooder, you will probably need to move them to roomier quarters. If you have a chicken coop or chicken house ready for them, you can move them in there and hang a heat lamp from the ceiling to keep them warm. They will instinctively go under the lamp when they are cold. Use something flexible like a piece of sheet metal, cardboard, or chicken wire to round out the corners to discourage the chicks from piling into the corners. In a really large chicken house chicks are more likely to get farther away from the heat lamp and head into a corner for warmth. If that becomes a problem, you can partition off a space under the heat lamp using scrap pieces of plywood. Keep in mind that as the chicks grow older and their wings feather out, they will be able to fly over anything less than two feet high, which means they could wind up on the other side of the partition away from the heat lamp.

If we are raising chicks in the late spring or summer and the temperatures are not falling below 50°F at night, we move them to a chicken tractor at six weeks when they are fully feathered. If it is still getting cold at night, we run an extension cord out from the barn to the chicken tractor and put a heat lamp in it to keep the chicks warm. 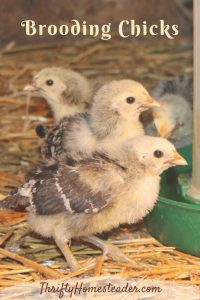