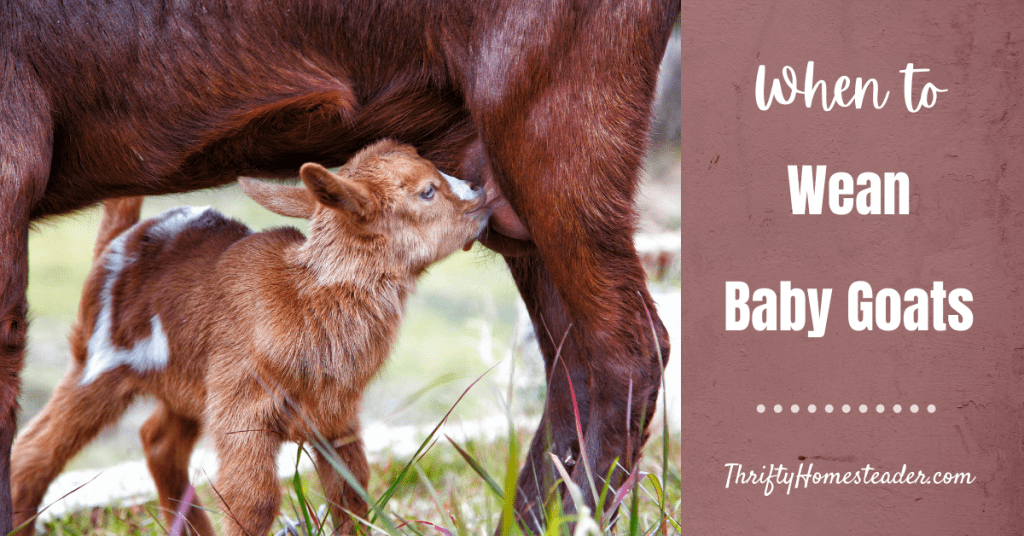 During the spring, I get a lot of questions about when to wean baby goats. And, as usual, the answer is…it depends.

Still, I have a few guidelines that help me determine when it’s the best time to wean baby goats.

As you dig into this article, be aware that most of these tips are based on my experience with Nigerian Dwarf goats. With that being said, you can use much of this information as a guideline for your own breed.

When to Wean Baby Goats Doesn’t Depend on Age

I realize that it may sound unusual to make the decision to wean based on anything but age. Over the years, however, I discovered that when to wean has more to do with the weight of the baby goat and not just the age.

It would be ideal if we could settle on a certain number of months to wean a baby goat. But the truth is, there are too many factors at play.

For example, each goat grows at a different rate. Each doe provides different amounts of milk (or none at all). And some goats have underlying diseases. So what it eventually comes down to is a healthy weight despite any obstacles a baby goat may encounter.

And one of the most reliable ways to gauge health is weight gain.

As you can see, the one common denominator in all of this is milk. No matter what, a baby goat needs milk for optimal growth. There isn’t any other food source that provides the nutritional equivalent to milk. Not even grain or alfalfa.

In other words, milk helps a baby grow and develop. It provides the protein young goats need to build strong muscles and the calcium needed for healthy bones. And no matter how much grain or alfalfa you give to a baby goat, it won’t meet their nutritional needs the way milk can.

If you tried to give a baby goat the equivalent nutrition in the form of grain, you’d end up with scours. Additionally, it’s not possible for a baby goat to eat the same amount of alfalfa for them to get the protein and calcium.

All this to say, there’s no set time when we can safely say, “Well, times up, they don’t need milk anymore!”

Not even when we see baby goats eating grain and hay.

In fact, nothing could be further from the truth. Because if we based our decision to wean on the moment a baby goat puts hay in its mouth, that baby would be in trouble. The truth is, kids start mouthing ev-ery-thing almost as soon as they’re born.

Baby goats use their mouths to explore the world around them. They learn from this, and even more importantly, they learn from their moms. So when you see a two-day-old baby goat “eating” a piece of hay, they’re actually just mimicking their mother and not necessarily eating the hay.

Over time, baby goats begin to eat grain and hay, but it’s a very gradual process. So, you can’t base weaning off of food in the mouth. Here is more information on what goats eat.

If I know I’ll be selling a baby goat, I won’t wean that kid before it leaves my farm. The day the baby is picked up is the day it is weaned.

When goats are stressed, they’re susceptible to things like illness, worms, or more specifically, coccidia. And a baby goat with coccidiosis is a baby goat with diarrhea and eventually dehydration. Maybe even death.

So it’s my goal to prevent stress as much as possible before selling a baby goat, because I want to set them up for success in their new home, not sickness.

In other words, baby goats are extremely stressed at weaning. It’s probably one of the most stressful moments in a goat’s life. Overcoming that moment takes a lot out of the baby. And in that same vein, leaving home and joining a new herd is equally stressful.

So, instead of giving the baby goat two worst days of its life, I limit it all to one day, and rip it off like a bandaid.

With that being said, I do not sell a baby goat until I am comfortable with its weight and health.

Aside from a healthy weight, the other determining factor when it comes to weaning buckling is sexual maturity.

I don’t feel comfortable leaving intact male baby goats in with mom and sisters for much more than 10-12 weeks, even though I have never had a successful breeding by a buck younger than 5 months. So, while I rely heavily on weight, I also keep a close watch on age when it comes to bucklings.

A lot of people worry about monitoring behavior, but many bucklings display mounting behavior within days of birth. So it’s not a reliable indicator of sexual maturity. Some goats, even doelings, are just very dominant and are constantly mounting other goats.

When to Wean Doelings

Since the milk does produce is the best defense against health issues, I also consider it a health insurance policy. And in case you haven’t noticed a trend, here’s my motto: I try my best to keep kids with their mothers as long as possible.

So, when it comes to doelings, I let mom decide when it’s time to wean her kids. I find that kids raised naturally, with mom, are some of the healthiest goats produced. Not to mention they grow faster and sometimes larger than goats weaned earlier. Most of them never have a problem with worms or coccidia, and they are more likely to reach two-thirds of their adult weight by seven or eight months so they can be bred to kid as yearlings.

When I first started raising goats, I had not heard anyone say not to breed does when they’re small. In fact, everyone I knew in the early years would breed does to kid as yearlings. But the one time I went against my better judgment and bred a smaller doe, I ended up in the veterinary office during kidding.

So What’s a Good Weight to Wean a Goat?

Since I raise Nigerian Dwarfs, I can speak specifically about this breed, although some of the same thought theories may apply to other breeds as well.

I’ve found that kids handle weaning best when they weigh about 20 pounds, which is one-third the weight of a full-grown Nigerian Dwarf. I’ve had the best luck, healthwise, when I’ve allowed kids to reach this weight before weaning. They thrive well and grow into healthy adult goats.

Any less than 20 pounds, and I’m uncomfortable with weaning or selling a kid. In fact, any less than that probably means the kid needs more milk.

This brings me to my next point.

Growth Rate as a Tool

Nigerian Dwarf kids gain, on average, 4 ounces a day if they’re healthy and everything in the milk factory is firing on all cylinders.

If a baby goat isn’t averaging about 4 ounces of weight gain per day, there could be something wrong. And weighing baby goats daily for the first two weeks and then weekly can put you ahead of the curve before serious problems become unmanageable.

A baby goat that’s not growing can indicate a variety of issues like disease or lack of milk. If a doe has mastitis or CAE, she may not produce enough milk, and some does simply do not have the genetics to produce as much as other does. When a doe has more than two kids, one of them could be less aggressive than the others and may not get its fair share and will need to be supplemented. In other words, slow or no growth could be a red flag that means you need to begin bottle-feeding a baby goat before it’s too late.

I prefer to know a kid isn’t gaining enough weight for a few days than to come out and find a half-dead kid when it may be too late to help.

So, as you can see, there isn’t one answer to the when-to-wean question. And a lot of the timing depends on growth, gain, and the health of your baby goat. In other words, let nature help you make the decision regarding the right time to wean your baby goats. 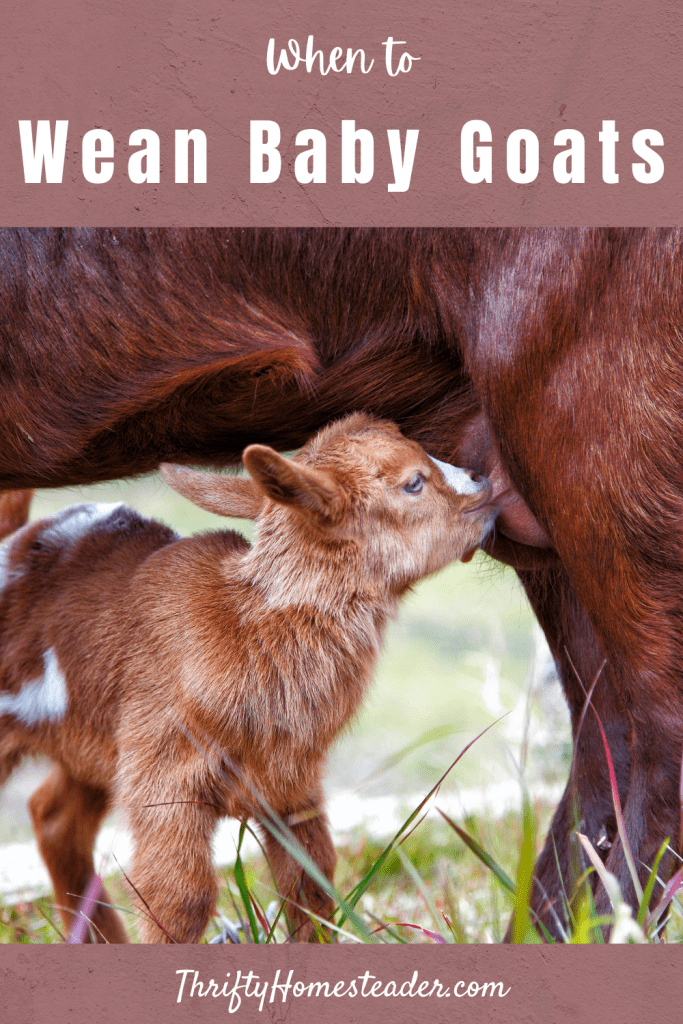 2 thoughts on “When to Wean Baby Goats”

Thrifty Homesteader is a participant in the Amazon Services LLC Associates Program, an affiliate advertising program designed to provide a means for sites to earn advertising fees by advertising and linking to amazon.com. You pay the same price when you purchase through affiliate links as you would if you went directly to Amazon, and our site earns a small commission, so by shopping through our links, you are helping to support our blog so that we can continue to provide you with free content.
167 shares
167 shares