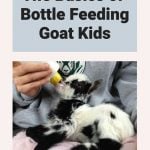 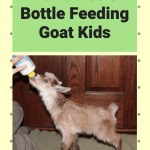 Even though I strongly believe that goat kids should be raised by mom, there are times when that simply is not possible. A doe may have more kids than she can feed. A kid may be born too small or weak to be able to nurse. And on rare occasion, a doe may reject one or more kids. So, if you find yourself with a bottle baby, what do you do?

Click to get “How much to feed baby goats?” spreadsheet

What do you feed a baby goat?

Goat milk is best, and I prefer raw milk because it has all of the antibodies intact. However, if the milk comes from a doe that has CAE, Johne’s, or another infectious disease, then the milk needs to be pasteurized so that the kid does not get infected.

Beyond that, you’ll hear people argue all day long about what to feed. We’ve used milk replacer, and we’ve used whole milk from the store, and we had equally OK results with both.

Without mom’s antibodies in fresh goat milk, the kids will be more likely to have problems with worms and coccidia, which is why some people use medicated milk replacer, which helps prevent coccidiosis.

I really think the reason some kids die on milk replacer is because of human error. If you do not mix it up with the correct amount of water, a kid can wind up with an intestinal blockage. Of course, if someone makes a mistake, it’s a total accident, so they would probably never realize they had done it. So if you do use milk replacer, be extra careful when reading the instructions and mixing it up.

Check out my “Just Kidding and Raising Kids” online course

How much milk do baby goats need?

20% of body weight in this example would be 16 ounces, which is preferred. The above example is only the MINIMUM amounts of milk needed in the first 24 hours!

I gradually increase the amount of milk in the bottle, up to 32 ounces per day for Nigerians. For years I maxed out at 24 ounces, which is what most breeders did back then, but I discovered that the kids are much healthier and grow faster with 32 ounces a day.

Ellen Dorsey of Dill’s A Little Goat Farm in Chelsea, OK, has raised Nubians and Alpines and says, “I’ll give them a 1-liter bottle, which is around 38 ounces, three times a day and then gradually reduce the middle bottle once they start eating hay and grain. So, I max them out at 114 ounces.”

How do you get a baby goat started on a bottle?

It is much easier to get kids started on a bottle if you are using a Pritchard teat because you can squeeze the bottle, which causes a few drops to go into the kid’s mouth. This helps them learn that this is how they get milk. And while they are learning, you are getting some milk into them, even if it is a few drops at a time. It’s much easier and faster than using an eye dropper!

Many years ago when we were new, we used human baby bottles, which works okay for a kid that already knows how to take a bottle. However, if the kid has never taken a bottle, that makes it much harder and sometimes impossible, which is why we started using the Pritchard teat at least 15 years ago and never looked back.

Below is a video of two kids getting their first bottle. Keep in mind that it is usually much more challenging to get kids to take a bottle if they have already been nursing from mom. The longer they have been nursing from mom, the longer it usually takes to get them switched to a bottle. It is not unusual for a kid to fight the bottle for several days or even close to a week if it’s been nursing for more than a day or two.

How often do baby goats need to be fed?

Most people feed 4-5 times in 24 hours, and you can usually go 7-8 hours overnight between bottles, so it’s about every 3-4 hours during the day. If a baby goat can’t consume much in the beginning, I may need to give five bottles to get at least 10% body weight into the kid in 24 hours. If the kid is a little piggy, I may be able to do it in four bottles in 24 hours.

Some people try to get kids down to only two bottles as soon as possible, but in my experience, baby goats are more likely to get diarrhea when given too much milk at a single feeding.

Feeding too much milk at one time is also the cause of abomasal bloat, which can cause death if not treated quickly.

How long should baby goats get a bottle?

Kids need milk for a minimum of two months, or in the case of my Nigerian dwarf kids, until they weigh at least 20 pounds, which is about 1/4 to 1/3 of their adult weight. I cringe when I hear someone say that they wean standard size goats that weigh only 20 pounds because obviously they need to be even bigger before weaning. And age is simply not a good indication of when to stop giving milk. Weight is much more important. After all, the goal of feeding milk to kids is so they can grow big and healthy.

Between keeping copious records of feeding and weight gain on our own kids, I have also received way too many emails and messages from people who have Nigerian dwarf kids that are several months old and weigh only 15 pounds and are suffering from chronic coccidiosis and diarrhea. These kids are obviously malnourished and have a very poor immune response due to not getting enough milk early in life.

In the early years, we used to bottle feed for three to four months. But since we’ve learned that mama’s milk makes them healthier, and they grow faster, we now bottle feed for five or six months. People who wean earlier are usually providing medicated feed to prevent coccidiosis. But that doesn’t always work either.

Where should bottle babies live?

Of course, it is tempting to keep bottle babies in the house with you. They are so adorable and cuddly! And it’s easier than going out to the barn to give a bottle at night. But having a kid in the house creates so many problems!

Sure, it’s cute and fun until the kid is running around and eating your mail and chewing up your extension cords and dancing on top of your CD player. (Yep, really happened.)

The worst part, though, is that they don’t know they’re a goat, and eventually you will have to put them outside, and it will be a very sad day as you listen to that kid screaming for hours. So, if they are a normal, healthy kid, I now make them stay with the other goats.

If they are weak or having trouble maintaining their body temperature, we will keep them in the house initially, but we move them to the barn with other goats as soon as it’s safe for them, which is usually within one or two days.

If we have more than one bottle baby, we will have a bottle baby pen in the kidding barn, so they can all stay together. But if there’s only one, we try to keep it with its mother and siblings, if possible. Because goats are herd animals, they should not be alone, and it’s best for them to realize that other goats are their herd, rather than humans.

Enroll in my “Just Kidding and Raising Kids” course
Guide to Pregnancy, Kidding, and Newborn Care

For more information on how to feed kids as they grow, check out this article on What Do Goats Eat? It depends? 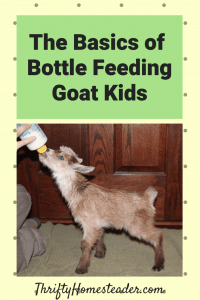 Thrifty Homesteader is a participant in the Amazon Services LLC Associates Program, an affiliate advertising program designed to provide a means for sites to earn advertising fees by advertising and linking to amazon.com. You pay the same price when you purchase through affiliate links as you would if you went directly to Amazon, and our site earns a small commission, so by shopping through our links, you are helping to support our blog so that we can continue to provide you with free content.
1753 shares
1753 shares