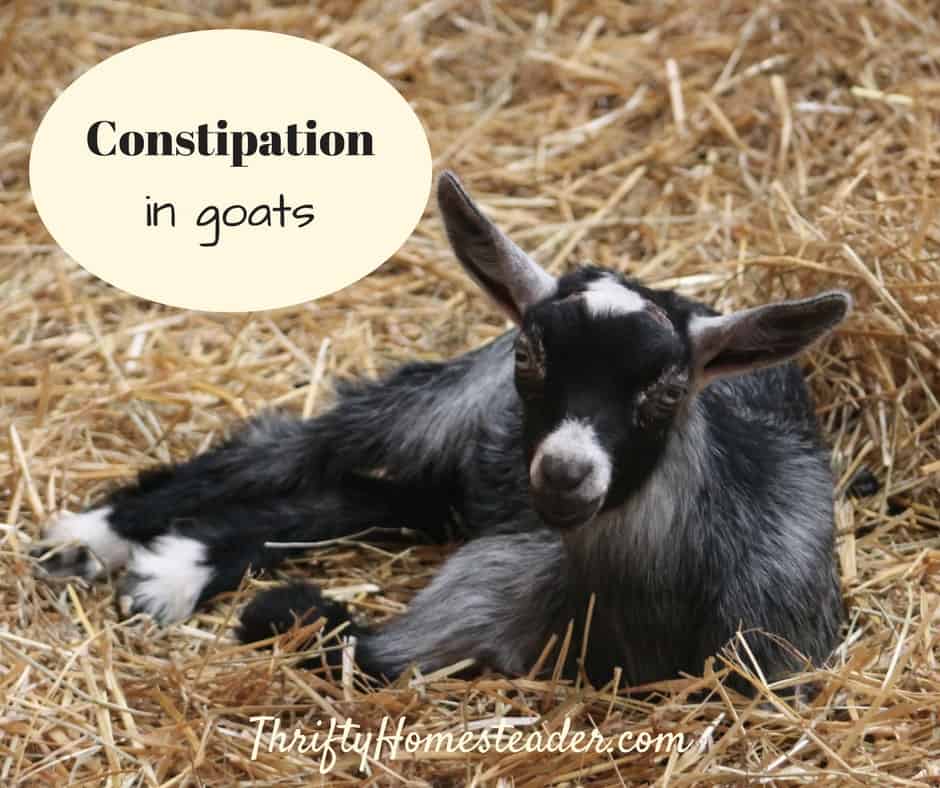 I started out my goat-raising education in 2002 in Yahoo groups. I belonged to four goat groups back then, and I don’t recall anyone ever talking about this topic. Each group had a few hundred active members, many of whom posted questions and comments daily. Just to be sure my memory was not failing me, I decided to go back to those groups to see if I had somehow missed all of the conversations about constipated goats.

In one group, there was only one post that mentioned goat constipation in the 14 years that the group was active. A woman posted about how her assumption that her wether was constipated ended with having to euthanize him for urinary calculi. She wanted to warn other members that if you ever see a male goat straining, you should first seek treatment for urinary calculi, which can kill a goat within hours.

Another group that was active for 18 years only had a couple of posts about goat constipation, mostly new people wondering how they’d know if they had a kid that was constipated. They were usually advised not to worry about it. When one person asked about an adult doe being constipated, she was advised to add wheat germ to her feed.

A group that was active for 10 years had one cross-posted question that was the same as in another group. And one group never had a question about constipation in 12 years.

When searching various Facebook goat groups, there are some where constipation is discussed at least weekly. In others, it is mentioned once a year or less. So, why are there so many posts lately about this “problem,” which really is not a problem?

I think it’s the goat owner’s version of med school syndrome — basically medical school students start to think that they are suffering from the diseases that they are studying. Yes, it’s a real thing. The more people talk about constipation in some of the groups, the more other owners think their goats have it. I saw the same thing in a chicken group with egg binding a couple of years ago.

Unfortunately a few years ago, a popular goat website published an article about constipation in newborns, calling it a “common” problem that can kill kids quickly. This post is quoted frequently in some groups. If I were completely new to goats and read that article, I might be a little paranoid about my kids’ pooping, but after having 650 kids here, and without a single case of constipation, I’d say it is not a common problem in newborns. Even if I had one tomorrow, that would mean it happened in 0.02% of kids. Unfortunately, that post mentioned no research or even anything in the veterinary literature.

It says that symptoms of constipation in a kid are a big, firm belly, not wanting a bottle, and standing hunched up with tail down. Those symptoms do not spell out a conclusive diagnosis of constipation or anything in particular. “Hunched up with tail down” is the classic posture that means a kid is unhappy and could be suffering from a painful disease or is simply cold, according to veterinary texts and my own personal observations.

In Diseases of the Goat, Matthews says that a distended belly in a kid may be due to “prematurity, congenital abnormalities, alimentary tract defect, kidney defect, heart defect, high alimentary tract obstruction, pyloric obstruction, abomasal obstruction.” In older kids, it can be due to “abomasal bloat, ruminal bloat, mesenteric torsion, inadequate nutrition, and gastrointestinal parasitism.” An enema, which is the suggested remedy on that site, won’t help any of those problems and would simply make a sick kid feel worse.

According to Goat Medicine, second edition, by Smith and Sherman, the reasons for constipation in goats, in general, are intestinal blockage, pregnancy toxemia, coccidiosis, poisoning, liver damage, dehydration, or lack of fiber in the diet. In other words, it is usually caused by a serious medical problem that needs attention — or by a diet that needs to be corrected. Nothing in this list will be fixed by an enema. The 800+ page veterinary text does not mention constipation in newborns at all.

According to the newly released fourth edition of Diseases of the Goat by John Matthews, constipation is common in artificially reared kids “in certain herds” as a result of management practices that dictate too much grain and not enough water. In other words, dehydration and not enough fiber. He only mentions plant poisoning as a cause of constipation in mature goats. On the flip side, there is a 28 page chapter on diarrhea.

The word “constipation” is not in the index of Goat Science and Production by Sandra Solaiman. It’s hard to believe that all of the goat veterinary texts would ignore something if it were a common problem, especially one that kills kids quickly.

It’s obvious that humans have a lot of problems with constipation. In 2015, American spent $1.2 billion on laxatives, so some people just assume all critters have the same poorly functioning digestive systems. But it’s widely accepted that human digestive problems are due to diets that are high in artificial ingredients and very low in fiber, as well as food sensitivities, which are not issues with goats, assuming you’re not feeding them Twinkies and Ho Hos.

However, a lot of people think constipation is “normal,” and that we have to make ourselves poop. This is not true with animals that are eating a natural diet. In 17 years, I’ve never had a single cow, sheep, goat, pig, llama, chicken, turkey, duck, goose, or any animal on this farm get constipated.

Unfortunately, constipation is becoming such a hot topic that too many people are assuming that it’s a problem with one of their goats. In many cases, there is nothing wrong with the goat at all. One woman described a doe that was basically acting like a buck, arching her back and making weird noises, which can be common when they’re in heat.

Another person had a buck that started thrusting when she was taking his temperature, which is also normal, yet the first person to comment suggested that the goat was constipated. Another had a young buck that was arching his back in a manner that is perfectly normal for a buck that’s trying to figure out how to start acting like a buck. “Arching the back” is sometimes the only “symptom” mentioned by people who think they have a constipated goat. Yet, goats don’t arch their back when they poop.

Another woman had a one-day-old kid that was standing hunched up with tail down and refused a bottle, and she assumed it was constipated — even though it was a dam-raised baby that had never had a bottle. Rather than working harder to get colostrum into the kid, she gave it multiple enemas, which is advised by that post. I have almost never had a dam-raised kid that wanted a bottle, even if it was on the verge of starvation, so refusal to take a bottle does not mean a kid is constipated.

If a newborn kid is weak, the first thing you have to do is get colostrum into it, and you cannot expect it to grab an artificial nipple and start sucking. (You have to hold the nipple in its mouth while the milk drips and the kid swallows. If a kid cannot swallow, then you have to tube feed.) In this case, the kid was one of quadruplets, and it is not unusual for a kid in that situation to wind up starving because there are only two teats. Unfortunately the kid in this case died.

Then there are stories like the one I found in the Yahoo group from more than ten years ago where the woman assumed her wether was constipated when he really had a urinary blockage. In addition to making a goat very unhappy by giving them an enema, you are wasting time not figuring out what is really wrong with your goat — or what’s normal about your goat.

Constipation should never be the first diagnosis you make whenever a goat looks a little off. Goat constipation is a very big deal on the rare occasion when it does happen. If you do have a constipated goat, it may have one of the very serious conditions listed above that would need veterinary attention. An enema doesn’t fix any of those problems.

Or you need to make sure that your goats have plenty of clean water available 24/7 and that they have access to enough hay and forage. Without enough water, they are also more likely to get urinary calculi, which is life-threatening. With too much grain and not enough forage and hay, they are more likely to wind up with serious rumen disturbances that can also be life-threatening. In fact, enterotoxemia, bloat, and thiamine deficiency are all well-documented conditions caused by feeding errors and are much more common than constipation.

And if you’re feeding Twinkies and Ho Hos to your goats, please just stop.