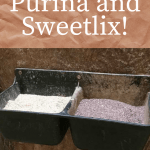 Purina and Sweetlix, two of the most popular goat mineral companies, have both changed their formulas. This may be a good thing in the long run, but they did nothing to alert consumers to these changes, which could have negative consequences. Many goat breeders supplement their goats with additional copper and other minerals beyond the free choice minerals. Because the new formulas of Purina Goat Minerals, Sweetlix Meat Maker, and Sweetlix Magnum Milk include chelated forms of copper, manganese, zinc, and cobalt which are better absorbed, many goats may no longer need additional supplementation. And Purina has increased the amount of copper in their mineral substantially. Sweetlix Meat Maker also increased the amount of salt, although they did not increase the salt in Magnum Milk.

If breeders continue supplementing with additional copper, which gets stored in the liver, this could have negative consequences. If the goats try to self regulate, they may avoid the mixed mineral and ultimately wind up with multiple mineral deficiencies. On the other hand, if the goats continue to consume the mixed mineral, they may wind up with copper toxicosis, which can be fatal.

After doing a Facebook Live about these changes, I have received many questions, mostly asking what to do! What would you do if you changed to a different mineral that had more copper in it? Many people have changed minerals on purpose through the years because they got tired of giving their goats additional copper (a.k.a. copper boluses). And I’m sure this is why these two companies switched to a more absorbable form of copper and why Purina increased the copper.

Basically everyone who uses these products has changed to a new mineral. We just didn’t know it. I’ve been feeding Sweetlix with great results for 10+ years, but I also have had to give my goats additional copper oxide every 3-4 months because we have a lot of sulfur and iron in our well water, which are copper antagonists that bind with copper and make it less available. I will continue to use Sweetlix, but I will not give additional copper unless I see signs of copper deficiency.

To complicate my life with this, earlier this year we switched to a new chlorine water treatment system that appears to have eliminated the sulfur from our water, so I have been holding off on giving more copper oxide since they should need less copper now that there is no longer that copper antagonist in their water. It has been six months since I’ve given copper oxide, and I’m still not seeing signs of copper deficiency — but we will see how breeding season goes! (Copper is very important for fertility.)

If you are giving your goats copper oxide, you probably remember the symptoms you saw that caused you to begin giving the copper oxide, but here’s my article on copper deficiency, if you need a refresher. (And I also need to update that article with this new info!)

What if you already gave your goats copper oxide and just now realized you are feeding the new formula of one of the minerals? Copper builds up in the liver and ultimately causes lesions on the liver. If goats are consuming copper orally, it usually takes months for toxicity to happen and eventually cause death.

In one study I read where goats received a mineral with 3000 ppm copper for three months, the goats had liver levels twice as high as normal but they had no lesions on the liver. With liver levels of copper that high, it’s reasonable to assume that at some point, they will wind up with copper toxicity. Unfortunately the study only lasted three months, but it proves that goats can live with higher liver levels for shorter periods of time. If they are not continuing to consume high levels of copper, the liver levels would eventually go back down. In other words, if you gave your goat a copper bolus and then discovered that you’re using the new Sweetlix formula, it’s probably not a problem. But it’s a good idea to hold off on supplementing again unless you know the goats need it.

I know people who’ve had goats die from copper toxicity after giving a MultiMin shot, and they died from liver and kidney failure. The level of copper in a dose of MultiMin is MUCH higher than what goats get in copper oxide consumed orally, and the liver and kidneys have to deal with it all at once, which is why it killed them almost immediately.

Other changes to the goat mineral formulas

Beyond the copper changes, which I think will ultimately prove to be a good thing, the companies have made other changes as well. In addition to changing the copper to a chelated form, they have also changed the manganese, zinc, and cobalt to chelated forms. So, if you have been using injectable MultiMin, which includes copper, selenium, manganese, and zinc, you may no longer need to do that either. Hopefully we will all see less problems with zinc deficiency.

With the cobalt being changed to a chelated form, you may no longer need to use cobalt boluses, if you’ve been doing that. One of the reasons I recommend Sweetlix is because it has always had 240 ppm cobalt, which is more than any other mineral. Most have less than 100 ppm. Cobalt is not listed in the nutritional analysis on Purina, and I requested that information more than a week ago and have not yet received it. I will update this post when I have the answer.

Purina has also increased the calcium in their mineral, which is a great change as the old formula did not even have the 2:1 calcium to phosphorus ratio that is recommended.

I will be updating my posts on copper toxicity and copper deficiency within the next month after I complete my next book, which is due to the publisher on Nov. 22, but in the meantime I wanted to get this information out there so that people are aware that their minerals have changed, so they may need to change or eliminate what they’ve been doing for additional mineral supplements. This post will also be updated as I learn more about the changes.

38 thoughts on “Changes in Purina and Sweetlix Goat Minerals”

Thrifty Homesteader is a participant in the Amazon Services LLC Associates Program, an affiliate advertising program designed to provide a means for sites to earn advertising fees by advertising and linking to amazon.com. You pay the same price when you purchase through affiliate links as you would if you went directly to Amazon, and our site earns a small commission, so by shopping through our links, you are helping to support our blog so that we can continue to provide you with free content.
710 shares
710 shares