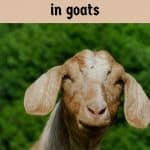 In the middle of an especially cold January in 2010 with temperatures falling below zero most nights, my bucks began losing large chunks of hair. There were bare patches of skin as large as two or three inches across in some spots. It looked like they had dandruff. I also started seeing foam collecting at the corners of their mouths. Then one morning I walked into the barn, and it looked like someone had sprayed dollops of whipped cream in a dozen random spots around the bucks’ stall. When I gave the bucks their hay, they just stared at me. They didn’t touch the hay.

All sorts of things went through my head. This was a new stack of hay. Maybe it was bad. Maybe the bucks had urinary calculi since I’d been giving them a little grain. No, it would be impossible for several bucks to get it at exactly the same time. After a bit of unproductive guessing, I called the university vet hospital. We discussed whether I should bring in two sample bucks or all five. I was really worried, so I hooked up the livestock trailer and took all five.

After a complete exam of all five bucks, the diagnosis was made that they were zinc deficient. I had been unable to purchase any grass hay for them that year, so they had been eating a diet of almost one hundred percent alfalfa for more than three months. I had heard that you have to balance the calcium in alfalfa with phosphorus in grain so that bucks don’t get urinary calculi when feeding grain or alfalfa to them, which is why I had been giving them a little grain every day. I had never heard that too much calcium in the diet will bind with zinc and cause a zinc deficiency, but that was exactly what had happened.

Symptoms of zinc deficiency in goats

According to Goat Medicine, goats with zinc deficiency may have flaky skin, joint stiffness, excessive salivation, swollen feet, small testes, low libido, poor appetite, and weight loss. My bucks were also underweight, but since we were at the end of breeding season, that’s not unusual, which is why I hadn’t seen that as a potential problem.

“Appetite is said to return within a few hours after zinc supplementation,” according to Goat Medicine, and that’s exactly what happened. They gave my bucks injections of Multi-Min, which is a prescription mineral supplement, and by that afternoon they were as ravenous as ever when I gave them their hay.

Nutrient Requirements of Small Ruminants says that the immune system may also be impaired, and there may be abnormalities in wool. Obviously “wool” is a reference to sheep, but in goats we see hair problems.

Commercial goat feeds and goat minerals all have adequate amounts of zinc in them, so most goats consume enough. Most zinc deficiency, however, is secondary deficiency caused by excess calcium in the diet. The only time I ever see zinc deficiency is in our bucks when they eat a lot of alfalfa hay. Because does have a high need for calcium to grow babies and make milk, they need the high calcium content in alfalfa, and that’s why it’s a favorite for dairy production.

Angora goats need far more zinc than meat or dairy goats because of the role zinc plays in fiber production.

Since most zinc deficiency is caused by excess calcium, the deficiency usually corrects itself if you simply remove the excess calcium. The vet adamantly told me to find a mineral without calcium for my bucks. The only goat mineral I’ve seen with a low calcium content is Sweetlix Magnum Milk, which is made for milkers who are on an alfalfa-based diet (because alfalfa is high in calcium).

Multi-Min is an injectable mineral that includes zinc, but it also includes copper, selenium, and manganese. If your goats tend to run low on copper and selenium, then using Multi-Min for a quick fix when you discover zinc deficiency may work as it did for my bucks. However, if your goats have never shown any signs of copper or selenium deficiency, an injection of Multi-Min could be fatal. I know two breeders who had multiple goats die from liver and kidney failure after injections of Multi-Min.

The vet sold me on the idea of Multi-Min because I would no longer have to do copper boluses or BoSe shots, and the bucks would have plenty of zinc. That sounded like a great plan. But I didn’t use Multi-Min very long.

Three months after an injection I had a buck that died with a copper liver level at 14 ppm. (It should have been 25 to 150 ppm.) A couple months later I was talking to a vet professor about my bucks, and he said, “Never supplement with a syringe.” Injectable minerals are great when you have an animal that’s sick and needs a supplement fast — such as my bucks that were not eating. But if you know you have a problem with chronic deficiency, you need to figure out how to get a supplement into them orally on a daily basis.

TruCare Z/M is a zinc supplement that also includes manganese. It has 2600 ppm zinc and is also labeled for daily use as a top dress.

TruCare 4 Top-Dress Trace Mineral Blend is a zinc supplement that also includes manganese, copper, and cobalt. This is a good option if your goat is also copper deficient. It is labeled for daily use. It has 10,000 ppm zinc (equal to 1%). It has 4 times as much zinc in it as Z/M, and since zinc and copper are antagonistic to each other, you don’t want to increase zinc too much without also increasing copper.

Since most zinc deficiency is actually caused by too much calcium, it can be avoided by eliminating the excess calcium. It’s a challenge to find good grass hay in my area as most farmers grow alfalfa. Some years I’m unable to find any at all. So I was really happy when my local feed store started carrying Standlee’s Timothy grass pellets. I initially had to top dress the pellets with grain to get the boys to try them, but now they gobble them up. Although they cost more than grass hay, there is zero waste — and you know how goats waste hay! The quality is also much better than any grass hay that I can find in my area.

Goats do need some long stem forage to keep their rumen working properly, so it’s not a good idea to feed 100 percent pellets because they require very little chewing and rumination compared to hay.

If I have some grass hay that’s not the greatest quality, I give about a cup of Timothy pellets to each buck morning and evening as a supplement. (They’re all fed together, so five bucks will get five cups of pellets in their feed trough.)

If I only have alfalfa hay, I double the amount of grass pellets so the bucks don’t need much alfalfa — just enough to keep their rumen busy.

My goal is to keep the alfalfa at less than half their intake, and the lower the alfalfa intake, the better. But keep in mind that nothing works out perfectly when it comes to goats.

Last year Monarch, one of our bucks, started foaming at the mouth in March. I explained to my husband how odd it was that only one buck would be showing early signs of zinc deficiency, and I explained the alfalfa connection. He laughed and said that it made perfect sense.

When he’d put a flake of alfalfa in the hay feeder, he said that Monarch would butt away the other goats and not let them have any until he’d had his fill. So he was consuming more alfalfa than any of the other bucks. Since I knew the bucks would be back on pasture in less than a month, I didn’t worry about Monarch, and as expected, the foaming stopped within a week or so of the bucks being off alfalfa entirely.

You can learn more about zinc deficiency in goats by listening to my podcast interview with Dr. Robert VanSaun, a vet professor and ruminant nutritionist from Pennsylvania State University.

This post is provided for educational purposes only and is not meant to replace the services of a qualified veterinarian.

65 thoughts on “Zinc Deficiency in Goats”

Thrifty Homesteader is a participant in the Amazon Services LLC Associates Program, an affiliate advertising program designed to provide a means for sites to earn advertising fees by advertising and linking to amazon.com. You pay the same price when you purchase through affiliate links as you would if you went directly to Amazon, and our site earns a small commission, so by shopping through our links, you are helping to support our blog so that we can continue to provide you with free content.
964 shares
964 shares