This guest post is written by Sue Beck, president of the Kinder Goat Breeders Association, whom I first met at the Mother Earth News Fair in Wisconsin, along with a couple of her beautiful goats. 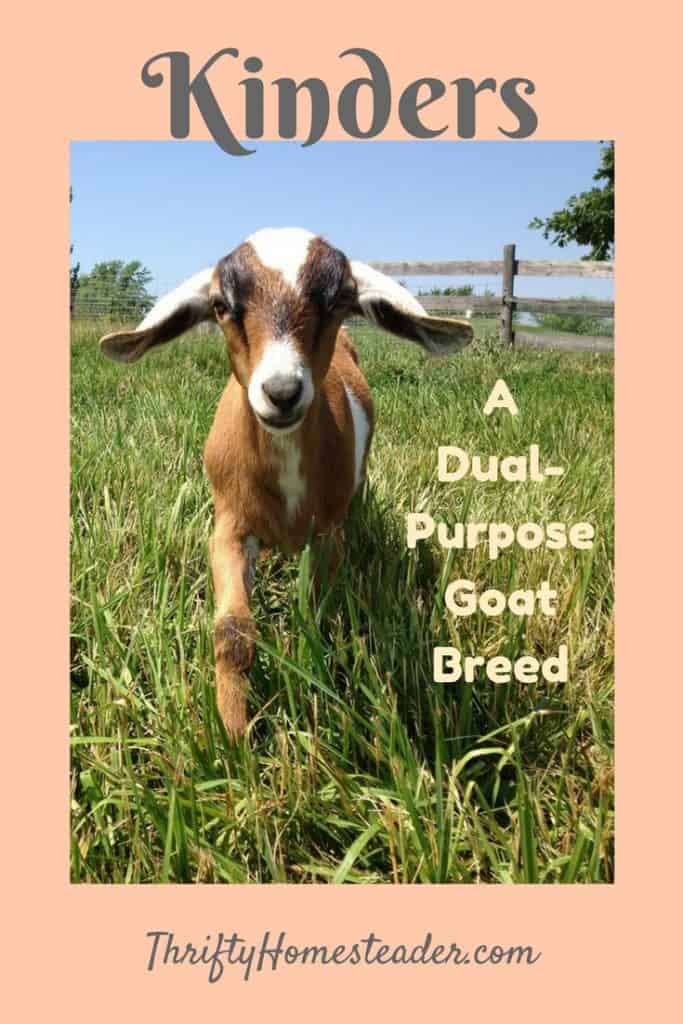 Life changing moments are never obvious when they occur. If they were, the moment I decided to get a few goats would have set off bells, alarms and probably fireworks. It changed EVERYTHING!

For those who don’t understand the spell of the goat, it’s simple – it is impossible to own goats and continue living the reasonably normal life that you led before. These happy, innocent little creatures will take over your yard, your checkbook, your sleep, your sanity and basically every aspect of your life, and you won’t mind at all. Two goats will become four, four will become eight, and then you will stop counting. You’ll stop worrying if you smell like goat when you go to work, and you will start showing friends pictures of your goats’ kids instead of your human ones. But that’s later. The first (crazy) step is deciding to get goats, and I did so with no idea what I was getting myself into!

Once I decided to get goats, I began my search for the perfect breed. The main purpose of our goats was going to be milk, so we needed a breed that produced a good amount of milk. Even with a long lactation, I knew that I would occasionally need to breed my does to maintain our milk supply, and breeding meant more goats. So our second requirement became clear – we needed a breed whose offspring (when not sold) could be raised to supply healthy, humanely raised meat for our family. My third and final requirement was that I could handle all aspects of my goats’ care without additional people or lots of special equipment, so I needed a goat that wasn’t too big. After a great deal of research, I settled on Kinder goats, and I have never regretted my choice… they are truly the perfect breed for my purposes. Why Kinder goats?

Kinder goats are a hardy, friendly breed that tend to flourish under a broad range of circumstances. From fancy barns and premium feed to free ranging on acres of browse, these goats are truly a great goat for anyone. They tend to kid easily with multiples and are wonderful mothers. If fed accordingly, many can raise three or four kids without the need for bottle supplementation (I did supplement the quintuplets born on my farm last year, mostly to give their mom a break!), and kids grow quickly and have few health issues. Average rate of growth is around 10 pounds or more per month with kids averaging 30-40 pounds at weaning and close to 100 pounds by a year.

Kinder goats are unique in a number of ways. With their airplane ears and colorful coats, many people assume they are essentially the same as mini-Nubians, but this is not the case. Mini-Nubians and other mini dairy breeds are bred exclusively for milk production, and originated by breeding Nigerian Dwarfs to the dairy breed of choice, whereas Kinder goats originated by breeding Pygmy goats (a meat breed) to Nubians (a dual purpose breed) in order to achieve a mid-sized goat that would excel in both milk and meat production.

Although they are comparable in weight to many full-sized breeds, these goats put heavy muscling on short, stocky bodies with moderate bone. Their more compact size means that they require much less feed than their larger cousins, often producing almost as much milk (those tested have ranged from 990-2290 pounds annually, with the average being 1557 pounds) and much more meat on half the feed! Their milk is high in butterfat – those tested average 6.25 percent, which gives it a sweet, creamy taste and makes it ideal for cheese making. Their meat is very mild, and has been voted best tasting in blind taste tests when compared to other meat goat breeds. 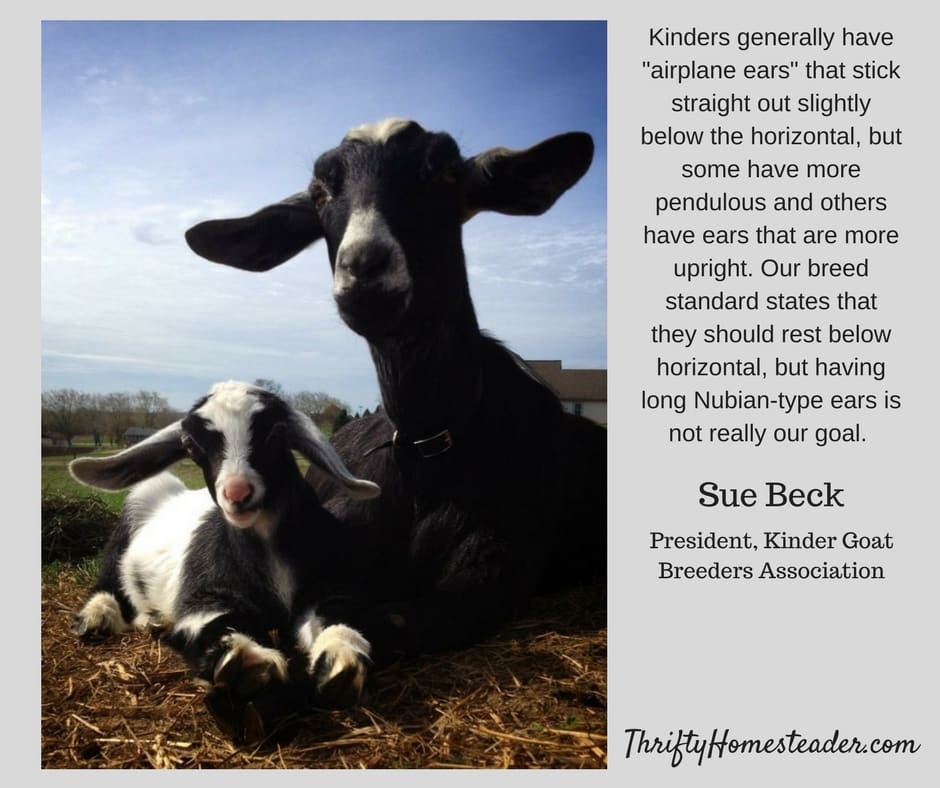 Kinders generally don’t have foot problems or parasite issues, but the breed is not without challenges. Kinder goats are becoming more widespread, but they are still not readily available in many areas of the country. This means that breeders are often forced to travel long distances or wait for months to get their Kinders. This also creates an issue for those who want to show their goats, because breed-specific Kinder shows are few and far between, and getting Kinders accepted in local shows often takes a bit of work and perseverance. As the breed grows in numbers and popularity we are seeing these issues decline, and hope they will eventually be of very little concern.

Kinder goats have many qualities not found in any other single breed. These qualities and their manageable size made them the obvious choice for my family, and for many homesteads and hobby farms throughout the U.S. For more information on these amazing little goats, please visit the Kinder Goat Breeders Association website.

Thrifty Homesteader is a participant in the Amazon Services LLC Associates Program, an affiliate advertising program designed to provide a means for sites to earn advertising fees by advertising and linking to amazon.com. You pay the same price when you purchase through affiliate links as you would if you went directly to Amazon, and our site earns a small commission, so by shopping through our links, you are helping to support our blog so that we can continue to provide you with free content.
1334 shares
1334 shares