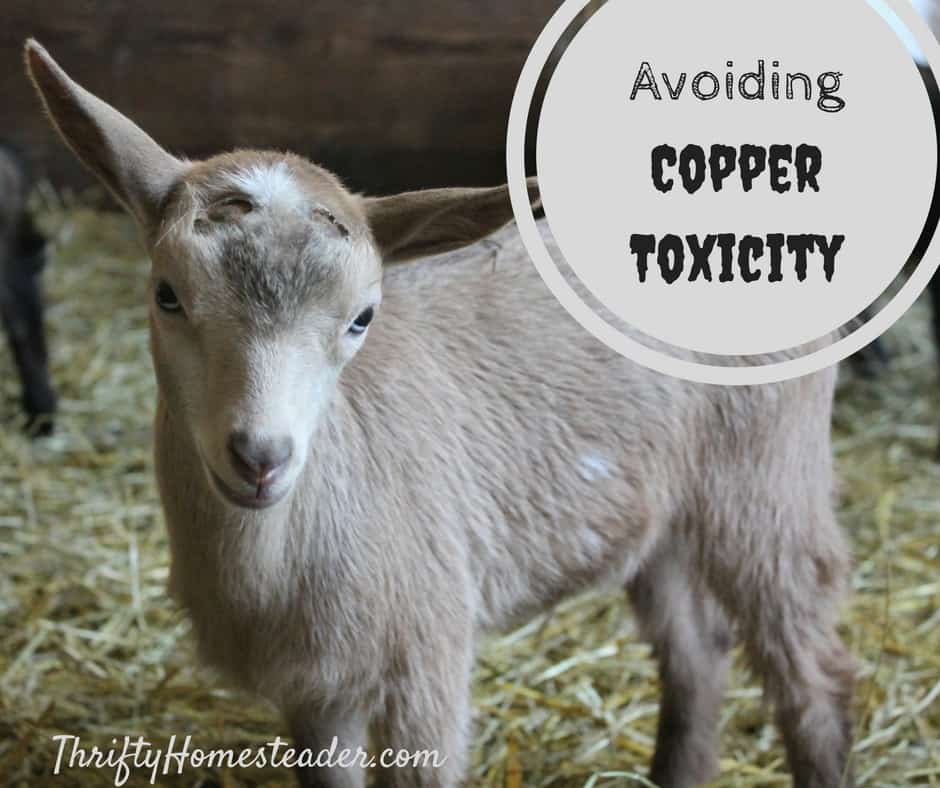 A lot of people have goats with classic symptoms of copper deficiency, but they’re afraid to supplement their goats with copper because they’ve been told that it could be toxic. I can understand their concern. We thought our goats were copper deficient for TWO YEARS and didn’t supplement. We continued to have problems with infertility, kids being born prematurely, and goats dying while four different vets told me copper deficiency was impossible. To make matters worse, they warned me about the risks of copper toxicity. It wasn’t until I insisted on having a liver tested that my suspicions were confirmed. We had serious copper deficiency problems in our herd. But vets continued to say it was impossible.

This isn’t surprising because back then vets were not taught about copper deficiency in vet school. It’s still not unusual to hear a vet say that copper deficiency is not a problem. In fact, we recently had a pre-vet student intern, and when I talked about supplementing with copper she asked, “Goats can be deficient in copper?” She said that in her animal nutrition class, they had only been taught about the risk of copper toxicity in goats.

To confuse people even more, it’s not uncommon for people on social media to say that symptoms of copper toxicity and copper deficiency are the same. I’ve looked through all of my veterinary texts, and the only symptom of deficiency that is listed as a symptom of toxicity is anemia. I don’t even usually list anemia as a symptom of deficiency because it only occurs in the most severe cases where you are already seeing all of the outward signs of deficiency — faded coat, fish tails, balding on the face, infertility, abortions, stillborn kids. Plus, almost all anemia in goats is caused by barber pole worm. But let’s assume that the symptoms are the same. It still would not be difficult to figure out if a goat was suffering from toxicity or deficiency because the cause is very different. If your goats are exposed to copper antagonists, then they are more likely to be deficient in copper. 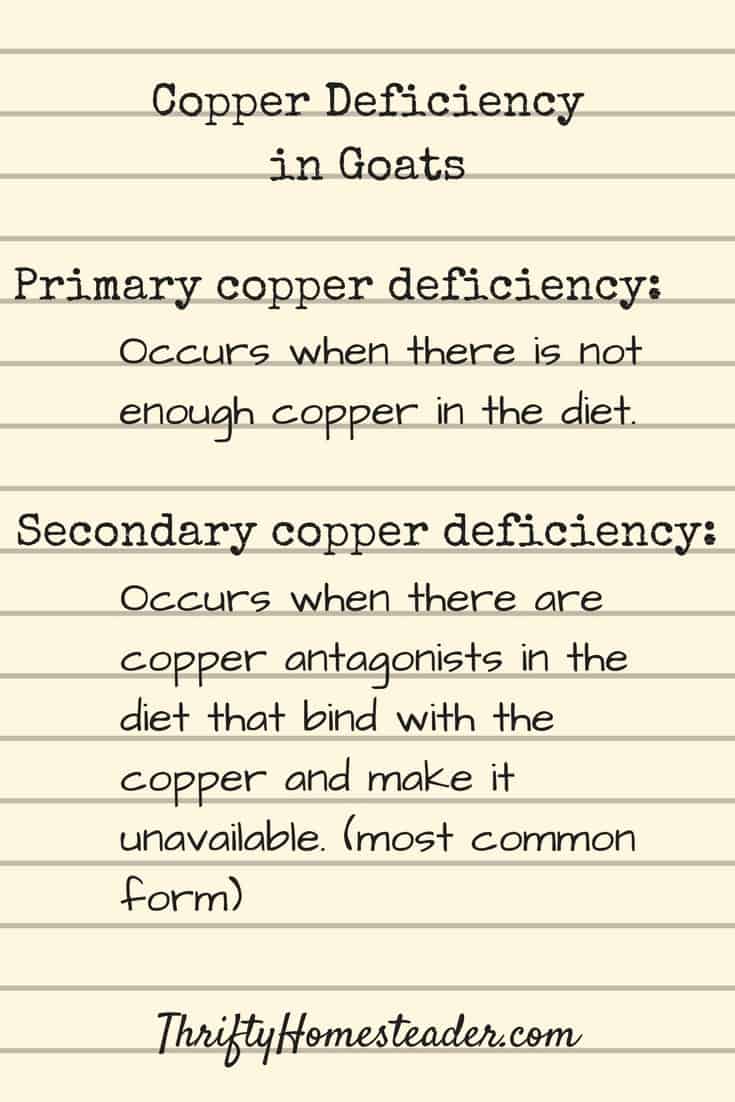 Are there copper antagonists on your farm?

Do you have well water that is high in sulfur (stinky), iron (turns sink orange), or calcium (leaves white deposits)? Those things can bind with copper, making it unavailable, and causing copper deficiency. If you have well water like that, your goats will probably need additional copper beyond the typical mixed loose minerals because the minerals in the water are binding with copper the goat is consuming. Are you within 25 miles of a coal-fired power plant, meaning that you may have sulfur deposits on your pasture? That would reduce the copper that your goats can absorb from their diet.

There is also molybdenum in alfalfa, which is also a copper antagonist. Mineral producers actually put molybdenum in sheep minerals to REDUCE copper that sheep absorb from their diet, which is not the best idea and has caused copper deficiency in some sheep. Yes, that means that if your goats eat a high-alfalfa diet, which is necessary for good production, that your goats may need more copper. (This does NOT mean you should stop feeding alfalfa; it only means that your goats may need more copper than they would if they were not eating alfalfa.) The amount of molybdenum in alfalfa can vary from one area to another, and it’s unlikely that alfalfa alone would cause copper deficiency, but if you already have well water with high mineral levels, the molybdenum in alfalfa could make it worse.

What causes copper toxicity in goats?

Primary copper toxicity, which means toxicity caused by diet alone, is almost completely unheard of in the US. Keep in mind that it may not have been caused by too much copper, but could have been caused by a deficiency of an antagonist like sulfur or molybdenum. Goats need sulfur and molybdenum — just not too much! That’s why it’s important that your goats have a good quality, loose mineral that is specifically labeled for goats only (NOT “sheep and goat” minerals).

Almost every case of copper toxicity in the scientific literature was caused by a copper supplement. Copper sulfate is very well absorbed, and it’s usually the form of copper that you find in mixed minerals. Years ago when I was trying to figure out what to do with our goats, I could find only one case study where goats died from copper toxicity. The goats had a cattle mineral available that had 3000 ppm copper sulfate. This is twice as much as what you find in most goat minerals. There are people online who swear by minerals with that much copper for their goats, but I would not recommend that level of copper sulfate for the vast majority of farms.

I know two people who’ve accidentally killed multiple goats with injectable Multi-Min. They died from liver and kidney failure from both copper and selenium toxicity, which was confirmed by lab reports. This is why I don’t recommend injectable copper, and this is why I say you should never try to copy someone else’s management. Conditions are different on every farm, and you need to treat your goats based upon their symptoms.

In the copper survey I did last year, there was someone who said that she accidentally killed a goat with a drench of copper sulfate, and I know other people who’ve had similar experiences.

Searching the veterinary literature for copper toxicity is not for the faint of heart. There are experiments where they have caused death in goats with extremely high levels of copper sulfate that were injected, sometimes intravenously, or given orally. It was always very high levels of copper sulfate, sometimes given for three days in a row before goats started to die, and it didn’t always kill all of the goats. Because the primary symptom of copper toxicity with copper sulfate is abdominal pain, this is a painful death to watch.

I’ve personally read more than 15 studies that used copper oxide wire particles in sheep and goats for parasite control, and there was never a case of toxicity in any of those studies in either goats or the sheep. It’s important to note that sheep have a much lower tolerance for copper than goats. Reading those studies is what finally put my mind at ease. I concluded that if sheep didn’t die from copper toxicity after being given copper oxide wire particles, then my goats would definitely be fine. I’ve been supplementing my goats with COWP since 2007, and we have done numerous liver tests on goats that died, and all of the copper levels have been mid-range normal.

To learn more about copper in goats, click on the links in this article, and sign up for my free online course that includes three videos, as well as downloadable handouts.