More than ten years ago when my goats had severe fertility problems, and my bucks all died before the age of three, an experienced breeder suggested that we might have a problem with copper deficiency. My teenage daughter did a lot of reading and agreed. But when I called the vet to ask for an injectable copper supplement, he insisted that copper deficiency was impossible if my goats were eating a commercial goat feed and had access to free choice minerals. So, I called another vet who said the same thing. Ultimately four vets said the same thing, which really scared me away from the idea of supplementing my goats with copper oxide wire particles, which were available from livestock supply catalogs. Ultimately a liver analysis of a dead goat proved that we did have a problem with copper deficiency. The vet still refused to give me the prescription copper, so I started using copper oxide wire particles (COWP), which are often called copper boluses.

Back then I had to buy calf boluses, tear them apart, and then redistribute the copper into goat-sized doses. Over the past decade, however, copper deficiency in goats has become more commonly accepted as a real problem, and goat boluses are commercially available. However, I still hear a lot of people ask if it’s safe. I’ve personally read more than 15 studies done on copper oxide wire particles used as a dewormer in sheep and goats, and there was never a single case of toxicity in any of those studies, even in the sheep, which have a much lower tolerance to copper toxicity than goats do. However, most of those studies only had a couple dozen goats or sheep in them, so I was still curious about what was happening in real herds.

Last month, I created a survey to learn what goat breeders are doing in their herds with copper supplementation. It will take some time to tease apart all of the data, but one thing became clear very quickly. Copper oxide wire particles are safe.

It appears the person who responded with the second answer may have accidentally responded “yes” because in response to the question that asked about frequency of using COWP, he or she also said, “Switching to 3x/year because 2x/year did not seem to be enough,” and this person also reported having a goat die from copper deficiency confirmed by lab analysis. Unfortunately this respondent did not include their email address, so I can’t follow-up.

No one had a goat that died from copper toxicity based upon their vet’s diagnosis, and three people said they had a goat who they thought died of copper toxicity. One person did not leave a comment to explain, and the other two added:

The person who left the second comment probably did not have a goat that died of copper toxicity because there are no known hays or grains that contain toxic amounts of copper. Since they were giving no supplements, it could mean that the goat actually died from copper deficiency.

Almost everyone dosed the COWP at 1 gram per 22 pounds or simply followed the manufacturer’s recommendation of one small bolus for kids and one large bolus for adults. There were a few people who dosed at higher rates, but this will take more time to analyze because the responses were written out.

How many goats are represented by this survey? If you average the herd size and multiply it times the number of respondents in each group, it comes out to almost 8,500 goats that the respondents own right now. When you consider the fact that 95 respondents have owned goats for more than ten years, that multiplies the number of goats even more. So it appears that copper oxide wire particles are extremely safe, even if one goat died from toxicity, which is questionable based upon that respondent’s other answers.

I’ll continue to crunch the data on the survey over the next few weeks and provide you with additional information, including symptoms of copper deficiency, diet, and mineral supplementation.

You can learn more in my free online course, Copper Deficiency in Goats, by clicking on the link. It includes live videos, PowerPoint lectures, and handouts. 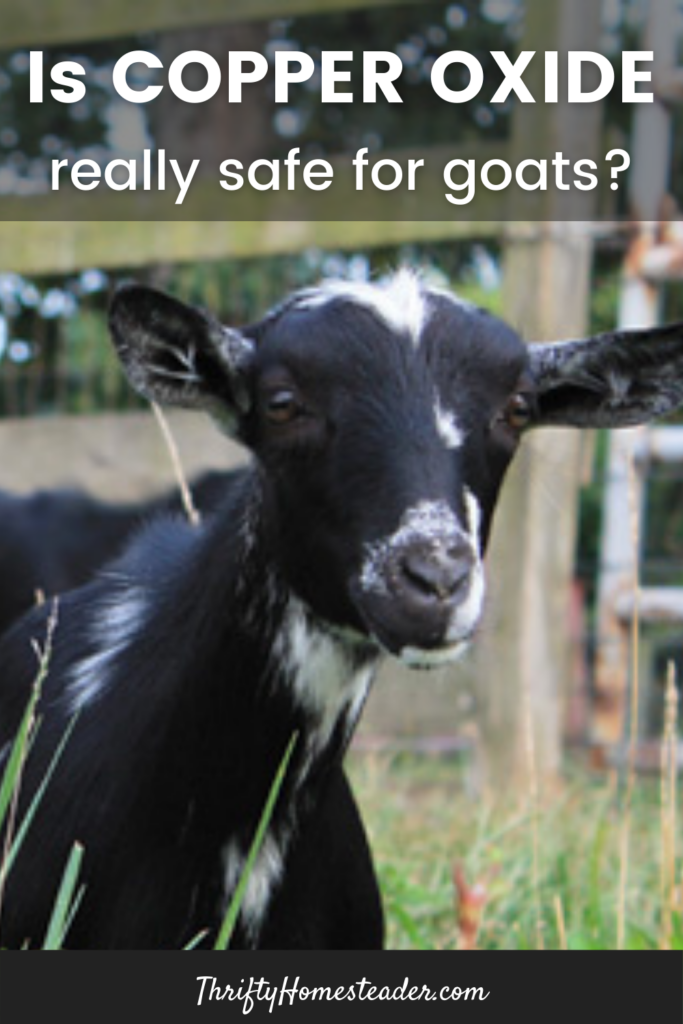 36 thoughts on “Is copper oxide really safe for goats?”

Thrifty Homesteader is a participant in the Amazon Services LLC Associates Program, an affiliate advertising program designed to provide a means for sites to earn advertising fees by advertising and linking to amazon.com. You pay the same price when you purchase through affiliate links as you would if you went directly to Amazon, and our site earns a small commission, so by shopping through our links, you are helping to support our blog so that we can continue to provide you with free content.
339 shares
339 shares