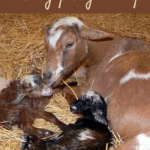 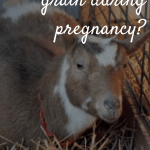 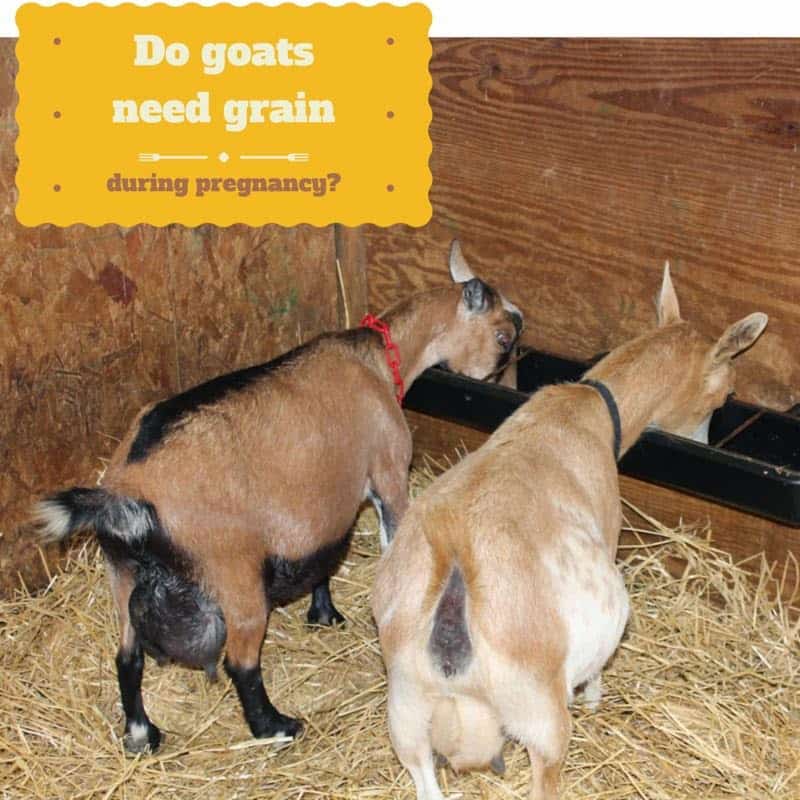 Every winter, when most dairy goats are pregnant, someone will post a link to this study in an online group and ask if they should be feeding their does grain during pregnancy. After all, they don’t want a bunch of dead kids in the spring, which is what this study says will happen if you don’t feed your does grain during the middle of their pregnancy.

Although this is a study, it is not a good study. First of all, 15 is a VERY small number of goats. We have had many years on our farm where we had 50 to 60 kids born to 15 to 20 does. The ultimate conclusion of a study like that would be to say that more studies need to be done to validate the results in other environments. After all, this was in Africa, where conditions are very different than North America. One should not take the results of that study and change your feeding program.

Second, there was something seriously wrong with the whole picture because their feeding plan does NOT explain why kids were dying. I don’t feed my does grain when they’re pregnant, and I don’t have 45% of my kids dying or being born at 2.3 pounds. I completely disagree with the conclusions drawn by the author of this study. My conclusion would be that the feed contained supplemental minerals that were necessary for fetal development, and by not giving the goats that feed, they were mineral deficient. If you’ve read my story of copper deficiency problems (here or in my book), you know that we used to have all sorts of problems with goats not getting pregnant, aborting, miscarrying, and giving birth to kids far too early for them to survive. I’m not saying that the goats in this study were necessarily copper deficient, but they were deficient in something that was vital for not only growth but vigor — possibly selenium?

We’ve had close to 650 kids here now, and I have seen zero correlation with kids dying when they’re smaller at birth unless they weigh less than 1.5 pounds. This study is saying that 2.3 pounds is “underweight,” which I disagree with. I have learned that kids that size can’t maintain their body temperature at below zero temperatures, but other than that they’re as healthy as the 3-pound kids. (And I’m sure they were not dealing with sub-zero temperatures in the African study.)

The fact that they had goats requiring c-sections with kids under 4 pounds also makes me wonder about the overall health of the does. Keep in mind that the study was done in Nigeria, where many environmental factors are also quite different than in this country — and it was done in 1992 when no one knew anything about goat’s nutritional needs. Back then, everyone still thought that goats were just like sheep and they should have NO copper in their diet.

Another problem with the overall health picture of the does is that African goats in the U.S. tend to have multiples, so if these goats were well nourished they should have had more than two kids per doe average. Each group had 9 kids born, which is less than 2 kids average per doe. The fact that each group had the same number of kids tells me that there was something equally missing from all of their diets. When we corrected our copper deficiency problem here on our farm, our average number of does per kid went from less than 2 to more than 2.5 every year and more than 3 some years! We have almost no singles any longer and lots of triplets. We have quite a few quadruplets and have even had six sets of quintuplets — and only two of those 30 kids died. I’ve sold two pregnant goats that went on to give birth to five and six kids, which were all healthy.

As I say in my book, you can feed grain to goats until they are overweight, but it will not necessarily correct a nutritional deficiency. It is not simply a matter of calories. Nutrition is what’s important. When we had a copper deficiency problem, our goats did not look underfed. In fact, some were on the heavy side. Feeding them more grain would have made them fatter, not healthier.

So, do my goats need grain during pregnancy?

It depends. (Yes, that’s usually my answer to everything.) Assuming that you have a good quality, high protein alfalfa or peanut hay available, and your goats don’t look underweight, then they probably don’t need grain. Keep in mind that you really should not breed a doe that is underweight, in the first place because she probably has nutritional deficiencies or a heavy worm load that may negatively affect her pregnancy.

Keep in mind that throughout this article when I say “grain,” I am talking about a commercial goat feed that has added minerals and vitamins. I am not talking about corn or oats or any home-mixed combination of plain grains, which are mostly empty calories high in fat and carbohydrates. I have been emailed by multiple owners who have fed simple grains and wondered why they had fertility and birthing problems, dead kids, and weak kids. Nutritionists may not have the perfect feed figured out yet, but most commercial goat grains are infinitely better than simple grains.

The following protocol is what I follow, based upon my 18 years of experience with these goats on this farm. It may or may not work for others, depending upon their goats’ genetics and the hay or pasture available for them. It is merely meant to be an example …

As long as a doe is being milked, she gets grain on the milk stand, so she will be getting grain until she dries up during the second or third month of her pregnancy. Once she is no longer milking, she doesn’t get grain until about day 145 of her pregnancy. (My does almost always give birth between 145 and 150 days.) Then I start her on a very small amount — like 1/2 cup — so as not to upset her rumen. And in most cases, I am only starting to give her grain to get her rumen adjusted to having it again, so that when she freshens and starts producing milk, her digestive system won’t get thrown out of whack by increasing the amount of grain too quickly.

I have found there are some good reasons to avoid giving it to some does. Feeding too much grain at the end of pregnancy can cause kids to grow too large. When a doe doesn’t need the extra calories, they go straight to the growing babies. Many years ago we had a couple of new mamas that were underweight, so I started feeding them Calf Manna, which is extremely high in protein and used for this very purpose, as well as making calves grow fast. My daughter misunderstood my feeding plan and starting also feeding it to pregnant does. Suddenly we were having very large kids that were challenging for the does to push out. Thankfully we discovered the problem before we’d had too many births.

If a goat has a history of giving birth to large kids, I don’t give her grain at the end of pregnancy. If I have a first freshener who is not looking very wide, I usually worry that she has a single kid, which tends to grow much larger than multiples, so I don’t give her grain. Yes, some does are great at hiding kids, but the worst thing that has ever happened is that a doe gave birth to a set of twins that were 2 pounds each. They were on the small side but super healthy, and they grew up big and strong. I’d rather have that than a yearling trying to give birth to a 4-pound single kid, which has happened and is not fun.

So, what’s a new goatherd supposed to do? 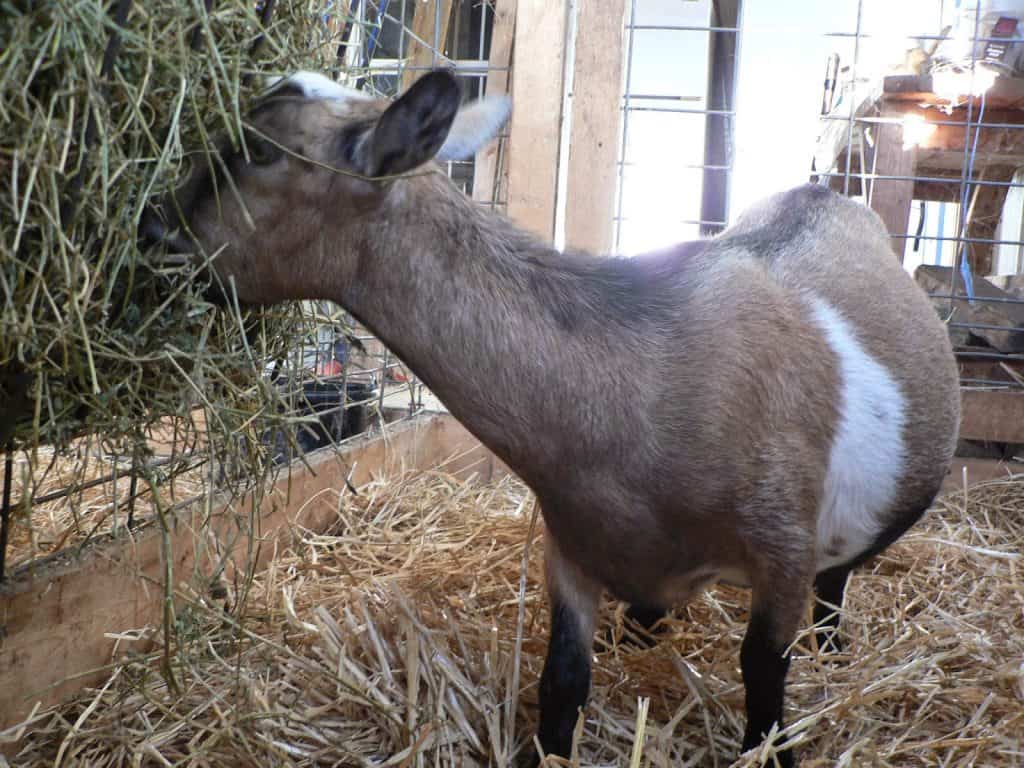 My number one rule of raising goats is to always listen to the goats. Are they well-muscled and healthy? Do they have a coat that gets fluffy in winter and shiny and slick in summer? Is the color of their coat still as dark as it was a few months ago? Do they get pregnant easily? Do they stay pregnant for the full term? Do they give birth without assistance to healthy kids? Do they pass their placentas within a couple hours of birth? And look at what you’re feeding them. Is their hay green? Do you have a legume hay, such as alfalfa or peanut available for the last month or two of pregnancy when their calcium needs are increasing?

It sure would be easy if we could just give everyone the same “perfect” feeding plan, but that doesn’t work because everyone has different pasture and water available, and they are dealing with different genetics. Some goats are simply easier to keep than others. But if you know what your goats need, and you know the symptoms of deficiencies, you can figure out what works best for your goats on your homestead. 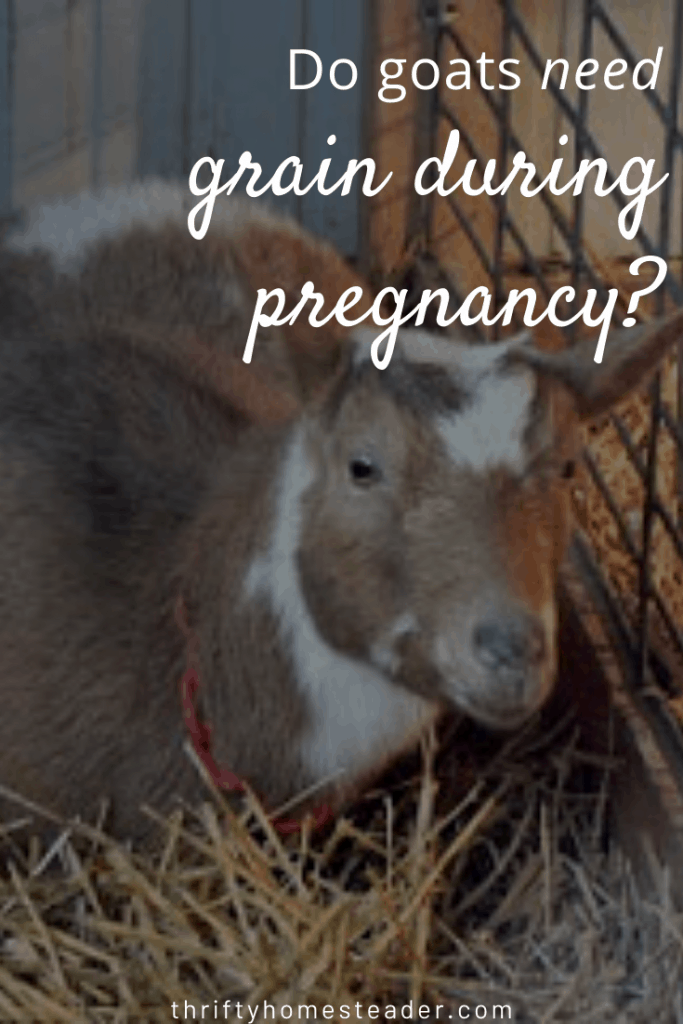 41 thoughts on “Do goats need grain during pregnancy?”

Thrifty Homesteader is a participant in the Amazon Services LLC Associates Program, an affiliate advertising program designed to provide a means for sites to earn advertising fees by advertising and linking to amazon.com. You pay the same price when you purchase through affiliate links as you would if you went directly to Amazon, and our site earns a small commission, so by shopping through our links, you are helping to support our blog so that we can continue to provide you with free content.
932 shares
932 shares