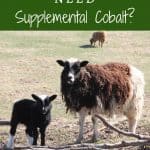 You may have seen a cobalt block at your local feed store, or if you’re on social media, you may have seen goat or sheep owners talking about them. People have stated that it helps goats utilize their feed better or that their particular breed requires more cobalt than other breeds. Even though my goats and sheep seem to utilize their feed just fine, I started to wonder if my goats could benefit from cobalt supplementation, so I checked Nutrient Requirements of Small Ruminants, which is authored by a committee of nine experts, such as veterinary or animal science professors and animal nutrition researchers. Unless otherwise cited, all of the following information comes from there.

We can’t talk about cobalt without talking about B12. A very tiny amount of cobalt is needed for goats to produce B12 in the rumen. The fact that ruminants produce their own B12 is one reason you don’t see B12 added in feeds and mineral mixes.  Research does not support routine supplementation with B12. However, goats and sheep can become deficient in B12 (usually because they’re deficient in cobalt), and it may be helpful to supplement deficient individuals with B12 in the short term.

What happens when goats or sheep become cobalt deficient?

When researchers fed sheep a diet completely free of cobalt, they became B12 deficient. Essentially, a cobalt deficiency is a B12 deficiency. Although most of the research cited was done in sheep, the daily requirement of cobalt is the same for sheep and goats, mostly because they haven’t done as much research in goats. One study concluded that goats don’t need as much cobalt as sheep.

B12 deficiency is described as a “slow-developing energy deficiency, which results in impaired thyroid function.” This has been associated with irregular heat cycles in goats and with more stillbirths and death of newborn lambs in sheep.

Severe cobalt deficiency over many months results in a wasting disease where animals lose weight and are unproductive and ultimately die. One person on Facebook said that she had a ram that was anemic and died, and her vet believed the ram was cobalt deficient. She also had goats with fertility problems, and after supplementing them with cobalt, their fertility improved.

Some goat owners in Facebook groups have said that they gave their goats cobalt because the goat had unpalatable milk or blood in the milk, which they attributed to a cobalt deficiency. After starting to supplement with cobalt, they said the milk tasted better or the blood disappeared, although I have been unable to find any research on this topic.

Where do goats and sheep get cobalt?

In summarizing the results of several studies where they measured the daily ruminal production of B12, it was concluded that sheep fed a roughage-based diet consumed enough cobalt (assuming the soil was not deficient) and did not exhibit symptoms of B12 deficiency. When they fed grain to sheep, their production of B12 decreased, but when sheep were fed grain that was fortified with cobalt, they did not become deficient in B12.

I’ve checked labels on five different popular goat feeds and found that they all list one or more forms of cobalt in the ingredient list, although the amounts were not included in the guaranteed analysis. This usually means that the amount of the mineral is very low, but in the case of cobalt, the amount needed is very low.

When checking labels on minerals, I noticed that Sweetlix Meat Maker loose minerals and MagnumMilk contains 240 ppm cobalt, but Purina Goat Minerals has none. Manna Pro has it listed in the ingredient list but not in the guaranteed analysis. Some breeders use cattle minerals for their goats, such as Payback UltraMin 12-12 Plus, which contains 25 ppm or PNW UltraMin 12-12 Se, which contains 20 ppm. Most Sweetlix sheep minerals have 130 ppm or less, which is interesting since the guidelines say they need as much as goats. As you can see, there is a huge variance between brands of minerals, so you should be sure to check the label if you’re concerned about the amount of cobalt in your minerals.

For lambs and kids, it’s important to know that colostrum is rich in B12, so newborns don’t need additional supplementation. (Since they don’t have a functioning rumen, it would be pointless to supplement them with cobalt anyway.)

Why do sheep and goats become cobalt deficient?

“Sandy soils in the southeastern United States, Atlantic coast, and parts of Michigan, Wisconsin, Minnesota, Iowa, Missouri, and Nebraska are deficient in cobalt, and forages grown in these areas may lack sufficient cobalt to meet the requirements,” according to Nutrient Requirements of Small Ruminants.

Can sheep and goats get too much cobalt?

The toxicity level for goats is unknown, but the likelihood is considered to be small. “Early signs of toxicity include failure to grow, unthriftiness, and loss of weight. If continued, fatty degeneration of the liver and anemia will develop.” The anemia may be caused by the fact that cobalt is an antagonist to iron, meaning that too much cobalt would cause an animal to be unable to absorb iron sufficiently.

It is worth noting that cobalt is also an antagonist to iodine, which is important for proper thyroid function. If an animal is iodine deficient, it may develop a goiter (swelling over the thyroid in the throat), have problems with fertility, cause stillbirths or hairless kids, and low milk production.

There does not appear to be a way for goats or sheep to get too much cobalt when eating a natural diet. That means cobalt toxicity is not something to worry about unless you are supplementing with cobalt.

How do you know if you need to supplement with cobalt?

If your goats or sheep don’t have symptoms of cobalt or B12 deficiency, then they are probably getting enough cobalt. Even though the symptoms of deficiency and toxicity are similar, it’s not that hard to know whether an animal is more or less likely to be deficient. If they are consuming a forage-based diet, then toxicity can be ruled out, and they’re probably deficient. On the other hand, if you’re supplementing with added cobalt, and you have an animal that’s anemic and wasting, they’re probably consuming too much.

Cobalt deficiency is actually pretty rare because animals need so little of it. If you are worried, you can have blood tested for cobalt or B12 levels, and you can also have the liver of a dead goat or sheep tested for mineral levels.

Should you use boluses?

Cobalt boluses sit in the goat’s stomach and slowly dissolve to increase serum levels of cobalt. However, once you’ve given a bolus to an animal, you can’t take it back. It supposedly takes one to three years for the bolus to dissolve, depending upon which source you read, as they have different numbers listed.

Are there arguments against providing a cobalt block?

Some people may think that you have nothing to lose by providing a cobalt block for your goats or sheep since the likelihood of toxicity is small, but that’s not the only danger of providing a block. One possible drawback is that the block is 98% salt, which could cause some goats to consume less of other minerals. Most mixed mineral use salt as a carrier and labels say that no other forms of salt should be available to ensure that animals consume enough of the mineral. After all, who wants to consume too much salt? Nutritionists specifically put salt in minerals so that animals don’t consume too much.

“I tried a large cobalt block for my herd just because I had heard of other farms using these, but then noticed that my goats were decreasing their consumption of loose minerals and choosing to lick the block,” said Julie Jarvis of Animal Cracker Farm in Maple Valley, WA. “They started having signs of other deficiencies fairly quickly. I had the cobalt blocks out for about 2 months. As soon as I removed the blocks, they rapidly consumed the loose minerals again and their other deficiency signs improved.”

The biggest argument against providing a cobalt block is that some brands of mixed minerals actually have more cobalt in them than the blocks do — and with less salt, so that the animals will eat more. One website had it listed as 100 ppm cobalt and 110 ppm iodine. Although this is more than some mixed minerals, it is less than half the cobalt found in Sweetlix and less than one-fourth the iodine in Sweetlix. So, if you are worried about your animals’ cobalt status, you should read the labels on minerals and find one that has a higher amount of cobalt and lower amount of salt. A mixed mineral would be preferable so that your animals would be more likely to get balanced nutrition.

What should YOU do?

Read the labels on your feed and minerals. Odds are good that you are already providing plenty of cobalt for your goats and sheep.

If you are super curious about any mineral levels, send a liver to a diagnostic lab next time an animal dies or you butcher one. The first time I did this, my daughter asked me if I knew what I was doing, and I said no, but I couldn’t hurt the animal because it was dead already. I called the lab and asked them exactly what they needed me to send them and how I should ship it to be sure I was sending them exactly what they needed. The price for this is usually around $25 to $50, depending on how many minerals you want tested.

Watch your animals. If you have an anemic animal that does not have a high worm load (most common reason for anemia) and is not deficient in copper (another cause of anemia), perhaps it is a cobalt deficiency, if your soil is cobalt deficient and you don’t have a mineral with cobalt in it. But if you are providing a mineral with cobalt in it, and your animals are productive and healthy, their cobalt and B12 level is probably fine.

18 thoughts on “Goats and Sheep and Cobalt”

Thrifty Homesteader is a participant in the Amazon Services LLC Associates Program, an affiliate advertising program designed to provide a means for sites to earn advertising fees by advertising and linking to amazon.com. You pay the same price when you purchase through affiliate links as you would if you went directly to Amazon, and our site earns a small commission, so by shopping through our links, you are helping to support our blog so that we can continue to provide you with free content.
392 shares
392 shares