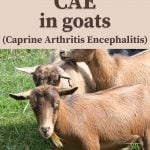 Fall is the perfect time to test your goats for CAE so that if any test positive, you will be able to remove the kids at birth in the spring. Not sure why you need to test? Check out this excerpt from the second edition of Raising Goats Naturally.

Usually referred to as CAE, caprine arthritis encephalitis is caused by a retrovirus, and there is no cure. It is transmitted through milk, colostrum, and other bodily fluids. Although it used to be extremely common in goats 20 to 30 years ago, it is less common today as a result of breeders testing their herds annually, culling positive animals, and feeding heat-treated colostrum or colostrum substitutes and pasteurized milk to kids of positive does. CAE is debilitating to goats and may eventually cause arthritis, mastitis, pneumonia, and weight loss. In kids under six months of age, CAE can cause a form of encephalitis, which is essentially the same disease as ovine progressive pneumonia (OPP) in sheep. For this reason, sheep should also be tested, and some would say that they should always be isolated from your goats. CAE is not believed to be contagious to humans.

Goats with CAE do not always show symptoms, which is why testing is important. Some goats can be positive for many years without ever appearing sick. Unfortunately, they are contagious and will give the disease to their kids, as well as other goats in the herd that may come in contact with their milk, colostrum, blood, nasal secretions, or vaginal discharge. For example, if a CAE-positive doe gives birth in the pasture, another doe that cleans off the kid could become infected with the CAE virus. A buck with CAE can also transmit the virus to a doe during breeding. (1)

Check out the “Goat Health” course
Guide to Injury, Illness, and Diseases

CAE doesn’t kill goats directly. However, they can wind up dying from chronic mastitis or pneumonia, and some owners euthanize CAE-positive goats when arthritis makes it difficult for them to walk as the joints in their legs become swollen badly. Weight loss usually occurs because the goat doesn’t want to get up and graze or walk to the hayrack or feed pan, but goats may also lose weight even without the development of arthritis.

Although the AGID (agar gel immunodiffusion ) test was used for many years to detect CAE, the ELISA (enzyme-linked immunosorbent assay) test is now preferred because it is more sensitive in detecting CAE antibodies. The PCR (polymerase chain reaction) test is another option but is much more expensive than the ELISA or AGID tests. PCR tests for the specific virus rather than antibodies, so it may detect the disease in some goats that would test negative with an antibody test. Because most people use ELISA or AGID tests for antibodies and some goats can have the disease for several months before seroconverting — having enough antibodies in their blood to test positive — many breeders with CAE-positive goats in their herd will bottle-feed all kids with pasteurized milk. CAE-positive adults can infect other adults, so goats that are CAE positive and those that are CAE negative should be kept separated. This also means you must be present for every birth so that you can remove kids before they have the opportunity to nurse from a CAE-positive dam.

Learn how Australia started to bring CAE under control, as well as how other countries have eradicated it completely on my podcast For the Love of Goats in Episode #28 – Working to Eradicate CAE

Thrifty Homesteader is a participant in the Amazon Services LLC Associates Program, an affiliate advertising program designed to provide a means for sites to earn advertising fees by advertising and linking to amazon.com. You pay the same price when you purchase through affiliate links as you would if you went directly to Amazon, and our site earns a small commission, so by shopping through our links, you are helping to support our blog so that we can continue to provide you with free content.
699 shares
699 shares