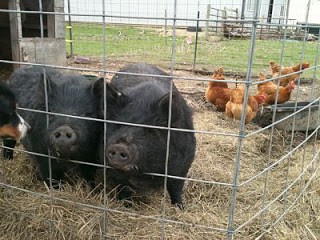 It’s spring, which means babies on the farm, and often, buying babies from other farms! A couple of months ago a fairly new farmer was telling me about a boar he bought that brought a whole lot of health issues to his whole herd, and he said the vet told him, “All of your health problems are bought and sold,” meaning that you buy new animals and bring health problems onto your farm. This is why it’s important to quarantine new animals for about a month after they arrive on your farm.

The fourth buck that I ever bought died only a few weeks after I brought him home, AND a couple months later, I lost two additional bucks to the same problem — parasites. If only I had quarantined him, at most, I would have lost only him. But I put him in the pasture with the other bucks, so he scattered his parasite eggs all over the pasture, where the other bucks could ingest them. Although I dewormed and moved the surviving bucks to a new pasture, it ultimately proved to be too late. Solving problems is always harder than preventing them!

You should also quarantine a new animal for their own health. Coming to a new farm is very stressful for an animal, and they are going to be especially susceptible to parasites and other health challenges. It is less stressful for their body to be in the barn on clean straw or in a “clean” pasture, which is one that hasn’t had the same species grazing there for the past year.

It is also less stressful for herd animals to not be alone, so it’s a good idea to buy two or more animals from a farm. It is also a good idea from a biosecurity perspective to limit the number of farms from where you buy your animals. I always cringe inside when I hear someone say that they’re starting their herd from five or six other herds. And usually they’re bringing them all home and putting them together from day one. Even if all of those herds had healthy animals, the stress of moving will take its toll. And all of those animals had their own physiological challenges that they were successfully combating on their farm, but when you bring them together, and they start sharing their germs, someone is going to get sick — and you will have no idea where the problem originated. This is one reason modern feedlots are such a bad idea and why they have to rely so heavily on drugs to keep the animals alive. You don’t see organic feedlots.

Quarantining should be relatively easy if you have a barn with multiple stalls, but what if you don’t have that luxury? If you have a large open barn, you can create separate pens with pig panels (for animals that don’t jump) or combination livestock panels, which are taller. New animals really should not share a fenceline because some germs can spread via nasal secretions or saliva, and certainly many can be spread via blood. If you have goats or sheep, they may butt heads through the fence until one or both is bleeding. Other diseases can be spread via feces, and animals can wind up pooping in the next pasture or pen if they are backed up against the fence. And all of us with animals know that “the grass is always greener on the other side of the fence,” so animals will be sticking their heads through the fence to eat the grass on the other side.

One reason we love temporary electric netting fencing is because you can set up a temporary pasture almost anywhere. You can also create a quarantine pen using four livestock panels outside. It makes a 16-by-16-foot pen, which can be moved every day or two. You can put it in an area where you don’t normally have livestock grazing like a side yard next to your house. That way, you can also keep a close eye on the new animals. If they are baby goats or lambs, you can give them a large plastic dog house for shelter. Although I’ve never used them myself, a lot of people really like the dog igloos because they remove the bottom, which means it can be moved to clean grass daily, rather than requiring regular cleaning.

Thrifty Homesteader is a participant in the Amazon Services LLC Associates Program, an affiliate advertising program designed to provide a means for sites to earn advertising fees by advertising and linking to amazon.com. You pay the same price when you purchase through affiliate links as you would if you went directly to Amazon, and our site earns a small commission, so by shopping through our links, you are helping to support our blog so that we can continue to provide you with free content.
400 shares
400 shares