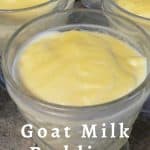 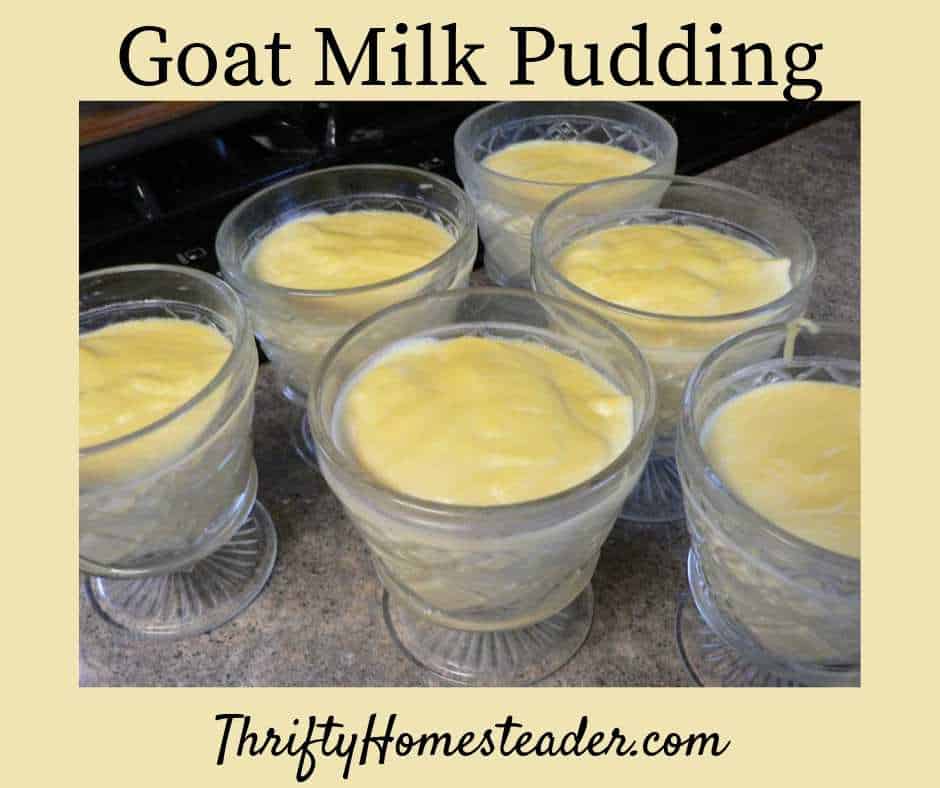 You’ve heard of the 100-mile diet where people eat only things that were grown within 100 miles. Well, I make a 100-yard ice cream that contains only ingredients that were made from within 100 yards of our kitchen — goat milk, eggs, and maple syrup. That’s it! Then I decided to try something similar with goat milk pudding. And I got close!

Keep in mind that I have only made this with Nigerian dwarf goat milk, so I’m not sure how it will turn out with other types of milk. ND milk averages 6.5% butterfat, which is higher than any other goat or cow, which is one reason we love them! But using milk with lower butterfat could cause results to vary. Sheep milk is higher in butterfat, so it might be even thicker. If you try it with another type of milk, let us know in the comment section how it turned out!

Homemade pudding is so yummy, and it only takes about ten to fifteen minutes to make. Put these ingredients into a blender:

Blend for about 15 to 30 seconds on low until everything looks well blended. Pour the ingredients into a medium pot on medium heat and stir with a whisk until it starts to bubble around the edges and thicken. Keep stirring for about another 30 seconds to be sure it really is bubbling and thickening, and then turn off the heat.

Pour into individual serving dishes. Grab a spoon and scrape the pan clean, eating what you scrape off. 🙂 I love warm pudding! But most people like it chilled, so put the dishes in the fridge to chill for a few hours before devouring.

What if you don’t have maple syrup?

I realize that not everyone has maple trees in their yard for boiling down their own syrup, so you can substitute an equal amount of honey or 2/3 cup sugar if you don’t have maple syrup. And add 2 teaspoons of vanilla after the mixture comes to a boil.

The maple syrup acts as both a sweetener and a flavor, but don’t expect the overpowering flavor of things that have been artificially flavored and called “maple” because real maple syrup has a more subtle flavor than the fake stuff.

Do I really have to use a blender?

You really do need to use the blender rather than just whisking everything together in the pot because eggs have this little piece of white thingy on the yolk that will not break up if you don’t use a blender. So, someone will wind up with this tough little thing in a bite of their pudding, and it’s rather unnerving to feel something in your mouth when you’re expecting the smooth sweetness of pudding. You especially don’t want your guests to wonder what foreign object is in their pudding!

Most recipes call for only egg yolk, and you can use 4 egg yolks in this recipe if you have plans for 4 egg whites. I started using whole eggs because I got tired of finding two-week-old egg whites in the fridge and tossing them. (However, I also learned that if egg whites dry out completely, they look like broken glass!) So I put whole eggs in the pudding now, and it adds a little extra protein. It also makes the pudding thicker!

Too many eggs? Check out these 20 egg recipes.

Thrifty Homesteader is a participant in the Amazon Services LLC Associates Program, an affiliate advertising program designed to provide a means for sites to earn advertising fees by advertising and linking to amazon.com. You pay the same price when you purchase through affiliate links as you would if you went directly to Amazon, and our site earns a small commission, so by shopping through our links, you are helping to support our blog so that we can continue to provide you with free content.
3452 shares
3452 shares