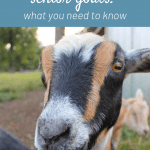 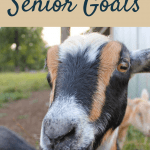 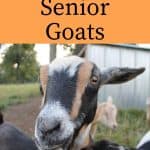 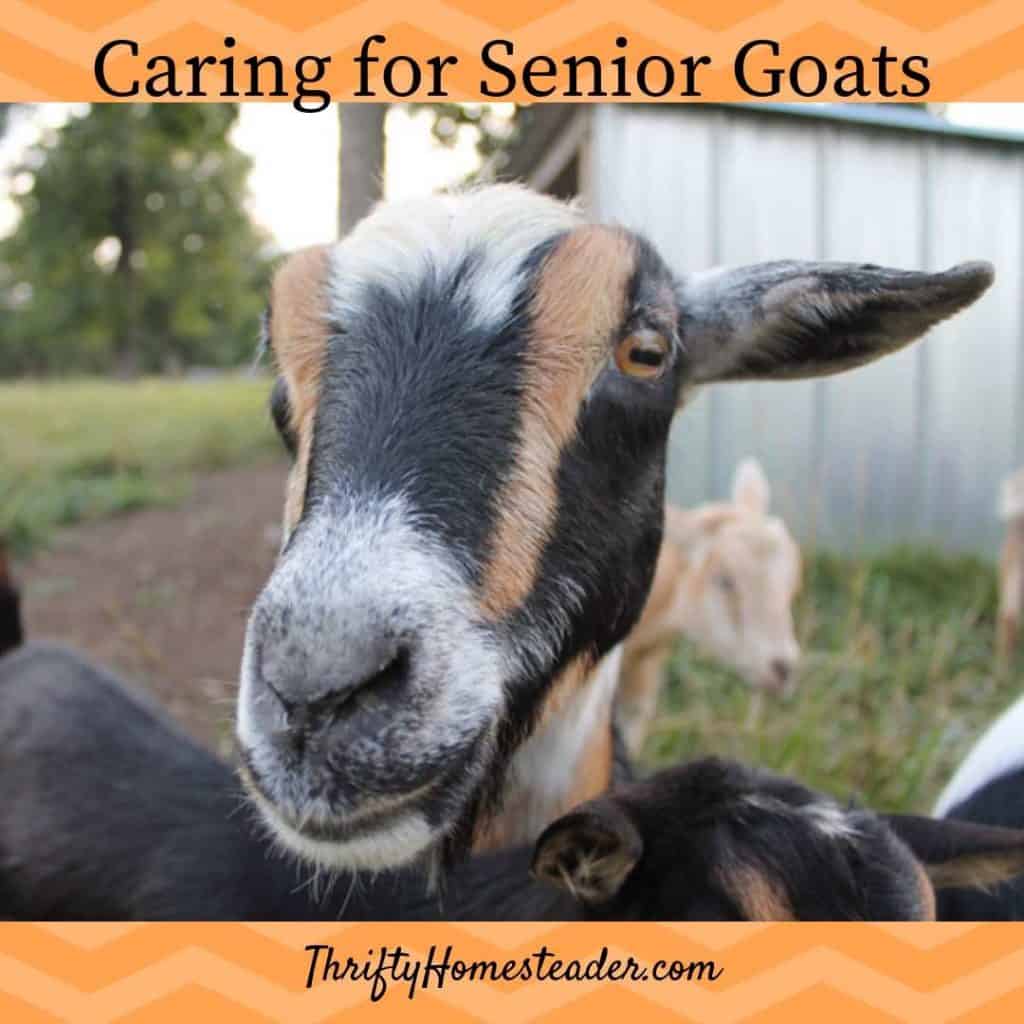 Buying goats is definitely a long term commitment as they can easily live to more than ten years. The oldest female goat on our farm died at 16 years of age, and another died at 14. Most of our does have died around age 12 or 13 while bucks usually die by 9 or 10.

You might expect bucks to live longer since they don’t get pregnant or make milk, but I suspect that breeding season takes more of a toll on them than most of us realize. They have such a one track mind that they don’t always eat enough. Many people have noticed that their bucks may need a little grain to maintain their body condition during breeding season if their hay quality isn’t top notch and there is no browse available.

In addition, bucks will also spend a lot of time fighting with each other if they are penned with another buck during breeding season — especially if they can see does nearby.

Wethers, which are castrated males, may be the longest lived of all. I have heard of a few of them living into the upper teens! They have zero stress through their lives since they are not producing babies, milk, or sperm, and they are not driven by their hormones to fight with each other during breeding season.

As goats get older, their fertility may go down. A buck may not get a doe pregnant as reliably as he did when he was younger. We had one buck who became sterile when he was 8 years old. We had him in a pen with three does, and after they continued to come into heat month after month, I finally gave up on him. Within a few months, he no longer even smelled like a buck.

A doe that usually has triplets or quads may start having twins or singles. Unfortunately this is not always true, however, and a doe who may have easily nursed triplets in the past may not have enough milk for twins when she gets to be 8 or 9 years old. There are no guarantees either way, so you just have to be aware that she won’t be producing as much as she was in her prime, and weigh the kids regularly the first few weeks to be sure they are gaining weight appropriately.

When one of our top milkers was 9 years old she gave birth to a single. Our routine with goats that have singles is to be the twin that wasn’t born and milk the doe from day one so that she has a good milk supply (because it’s all about supply and demand). We were not getting much milk when we milked the doe without separating the kid. Normally we would get an equal amount of milk if we separated the kid overnight and milked mom in the morning, or if we didn’t separated the kid at all and milked mom twice a day.

So, we decided to start separating the kid overnight to see what happened. We still did not get much milk, and the kid’s weight gain slowed down to a crawl. (Thank goodness we were weighing the kid!) After three days, we realized that at age 9, the doe could not produce enough milk for the kid and us, so we quit milking her so she could just grow the kid as big and healthy as possible. And we were very thankful that she had only had one!

Maiden does and life expectancy

I am sometimes asked if pet does will live longer if they are never bred. Unfortunately you can’t make that assumption. Many years ago I sold two doelings to a young girl who was afraid something bad would happen if she ever bred them, so she didn’t.

A couple years later she bought their sister who had kidded twice on my farm. The buyer has kept in touch through all of these years. Her does had an ongoing challenge with obesity, even though they never had grain. The doe that had been bred twice actually lived the longest. The two maiden does only lived to be 9 and 10 years old, which is really young for a doe to die.

I have a maiden doe that is 10 years old, and she has really slowed down in the past year. She has been overweight since she was about 3 years old, even though she only eats hay, browse, and pasture. She was never bred because she is so small that I’m afraid she would require a caesarean section, but she was otherwise quite healthy in her earlier years.

One of the biggest changes in goats as they age is their teeth. You can actually get an idea of their age by looking at their teeth. Most people who contact me about the declining body condition of their older goats have never thought about the possibility that their teeth may not be in great condition any longer. This means it could be very challenging for them to eat hay or browse.

You may need to feed them something soft like a small amount of senior horse feed plus soaked alfalfa pellets and soaked beet pulp. I don’t normally recommend beet pulp because it is just a cheap source of fiber and calories, but in the case of geriatric goats with bad teeth, it can be helpful. You should never give goats a feed simply to fatten them up before you know why they are underweight.

Some senior goats may have more trouble with parasites. However, this is not always true, especially with does. My doe that lived to be 16 usually had a rough time with parasites after kidding, but once she was retired, her parasite problems were pretty much gone for about five years. It wasn’t until a few months before she died that she needed a dewormer.

Like many mammals, goats can get arthritis as they get older. If a young goat gets arthritis it may be due to an infectious disease called caprine arthritis encephalitis (CAE). But if your 14-year-old goat starts to have trouble walking or bending her front legs before laying down, it could be arthritis.

I have not been able to find any research on age-related arthritis in goats. Whenever you search for the words “arthritis” and “goats,” the results are filled with research on CAE, and the recommendation for CAE is euthanasia because it is incurable and highly contagious.

There are approved supplements that contain MSM, glucosamine, and chondroitin that are made for dogs and horses, and some people use them for senior goats also. Those supplements have proven to be very safe in humans, and some people have used them with their goats, but I have not been able to find any real research on goats in terms of safety or dosage.

For more information on treating arthritis in goats, as well as dental issues and weathering extreme temperatures, check out my interview with Dr. Michael Pesato from Mississippi State University.

The challenge with raising food animals — as goats are referred to in veterinary circles — is that most of them don’t live long enough to get old. That means there is no research on them. Since I spend a fair amount of time around the university teaching hospital I learned years ago that the emphasis on research with food animals is on herd health and keeping animals healthy enough to produce the food they’re meant to produce, whether it is meat or milk. If they can’t produce food, they are usually put down, especially if they are endangering the herd health. 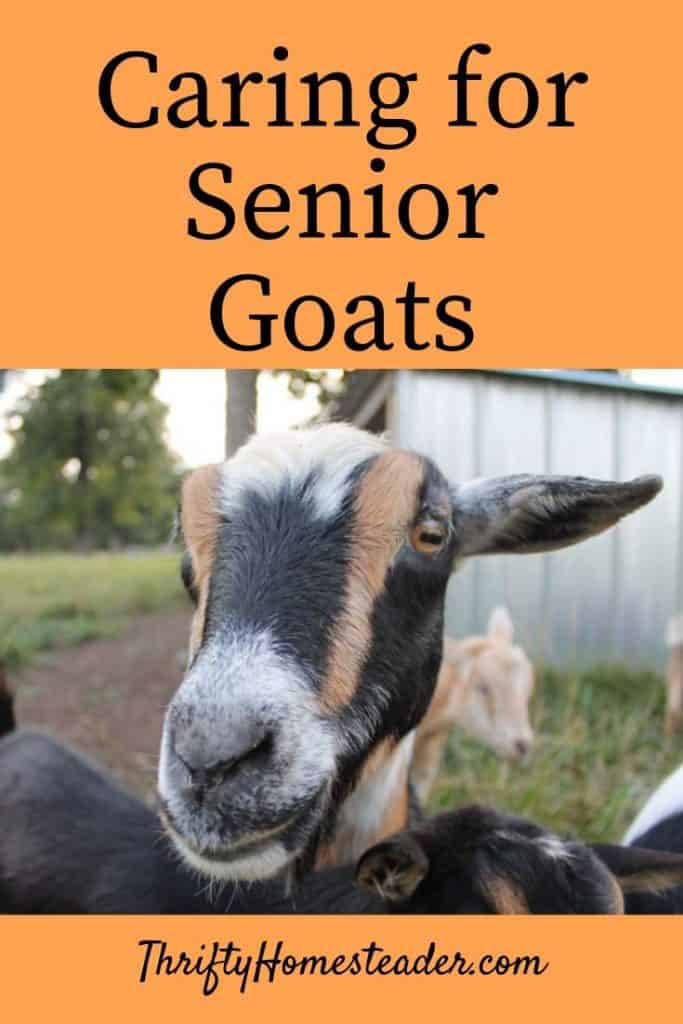 35 thoughts on “Caring for Senior Goats”

Thrifty Homesteader is a participant in the Amazon Services LLC Associates Program, an affiliate advertising program designed to provide a means for sites to earn advertising fees by advertising and linking to amazon.com. You pay the same price when you purchase through affiliate links as you would if you went directly to Amazon, and our site earns a small commission, so by shopping through our links, you are helping to support our blog so that we can continue to provide you with free content.
689 shares
689 shares