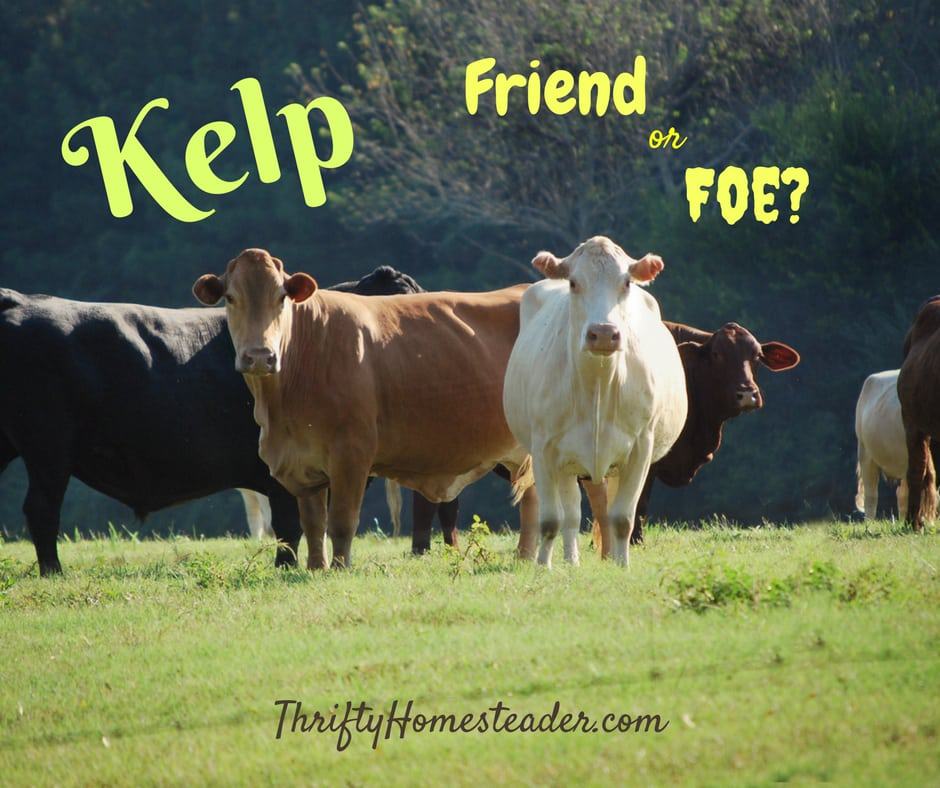 Opinions on kelp for livestock vary about as much as they do on politics and religion. While one person says it’s a savior, others say it’s dangerous. The truth is somewhere in the middle. And as always, keep in mind that conditions vary from farm to farm, so what works great for one farm may not work as well on another farm.

Before we dive into the nutritional analysis of kelp, I need to tell you that it’s tough to find nutritional analyses of kelp. Most bags of kelp have no information on them in terms of what they contain. When I was at a conference in November, a representative from Thorvin Kelp said that’s because they have to meet a minimum level before they can claim to contain a specific nutrient, and most of them do not. When researching for this post, I searched for “livestock kelp” online, hoping to find at least a few for comparison.

Although there is plenty of kelp available to buy, Thorvin was the only one I found that had a complete nutritional analysis. Although Source claims to have “at least 60 elements and their associated micronutrient compounds,” the only ones listed in their guaranteed analysis were protein, fat, fiber, and iodine.

Since Thorvin was the only complete analysis I could find online, that’s what I’ll be using as a reference here, but keep in mind that levels in other brands of kelp may very well be much lower.

Although kelp does contain dozens of nutrients, the only one that is in any decent amount is iodine. Kelp was used in a study to raise the iodine level in cows that were iodine deficient. Since the tolerable level of iodine is 100 times greater than the minimum level needed in ruminants, no one really worries about toxicity. However, if you have horses, they are very sensitive to iodine, so you should only give them the measured amount that is available in products specifically labeled for horses.

Thorvin kelp has 780 ppm iodine, whereas Source kelp has 660 ppm, and Sweetlix Meat Maker for goats has 450 ppm. Sweetlix Stocker B1600 Mineral for cattle has 35 ppm. Some cattle minerals have no iodine listed at all, which may explain why cattle ranchers love kelp so much.

Thorvin kelp has 0.5 ppm selenium. Compare that to Sweetlix Meat Maker, which has 50 ppm selenium and the Sweetlix cattle mineral with 24 ppm, and you can see that kelp will do nothing to increase the selenium level of an animal that is actually deficient. Yes, the goat mineral has 100 times more selenium in it than kelp.

I’ve also been asked if kelp has so much iron it that it can bind with copper, causing copper deficiency in goats. I did not find anything in my research to understand where this came from, but the numbers do not support this assertion.

Thorvin kelp has 622 ppm iron, whereas up until 2019 Sweetlix Meat Maker had 1.25%, which is 12,500 ppm, so the goat mineral had 20 times more iron in it than kelp, meaning there is no way the level of iron in kelp could be dangerously high. At the time of this edit in October 2019, Sweetlix no longer lists iron in the nutritional analysis of the product, but when I contacted the company they said the level is the same.

Some also worry that there is so much sulfur in kelp that it will bind with copper, causing copper deficiency, so let’s look at the numbers. The amount of sulfur in Thorvin kelp is 2.8%. So, if you know that goats need about 0.26% sulfur in their diet (according to Nutrient Requirements of Small Ruminants), that sounds like a lot, but how much kelp are they eating? If it was 1/10 of their diet, it would be perfect, but there is no way that it is anywhere close to 10% of their diet, as they only have a few bites a day. I think of how little kelp is in the mineral feeder compared to how much hay is in the hay feeder, and it’s not even 1% of their diet.

Some people worry that the sodium content of kelp will cause their goats to reduce their intake of other minerals, which use salt as a carrier. I find it interesting that people worry about this while not usually checking the salt level of the minerals they have available free choice for their livestock. So, here are some comparisons …

While livestock will only consume a limited amount of sodium per day, I don’t think the sodium equation is quite as rigid as some nutritionists would have us believe. Many cattle producers have been providing kelp for decades with excellent results. I started providing free-choice Fertrell kelp for my goats more than ten years ago with great results. It doesn’t affect their consumption of other minerals because kelp is simply a salty food. It’s not just salt, and it has a distinct flavor. I personally eat seaweed snacks, including kelp, so I know how it tastes.

Research has shown that goats and sheep are capable of consuming foods that contain specific nutrients in order to correct a deficiency, including this recent study, and they are able to do that based upon taste. If things taste different, they can associate that taste with the nutrient and consume it to correct deficiencies.

I find the kelp debate fascinating. I think it may be the result of some enthusiastic kelp lovers over-stating its merits, which leads to skeptics worrying that it could be too much of a good thing. Have you heard any other “facts” about kelp? Any other nutrients or elements that kelp is particularly high in? Have you seen any studies about kelp? Share your thoughts in the comment section below. Also, if you find the numbers are different than what I quote, please let me know! As you can see from the edits in 2019, the companies do change their formulations from time to time, and I want to keep this page up to date.

This post contains an Amazon affiliate link. If you buy something after clicking on the link, we will make a small commission while you pay the same price as you otherwise would. It is one way we are able to continue providing you with free content, such as this blog post, videos, and other informational material.