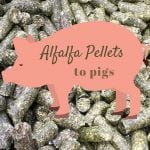 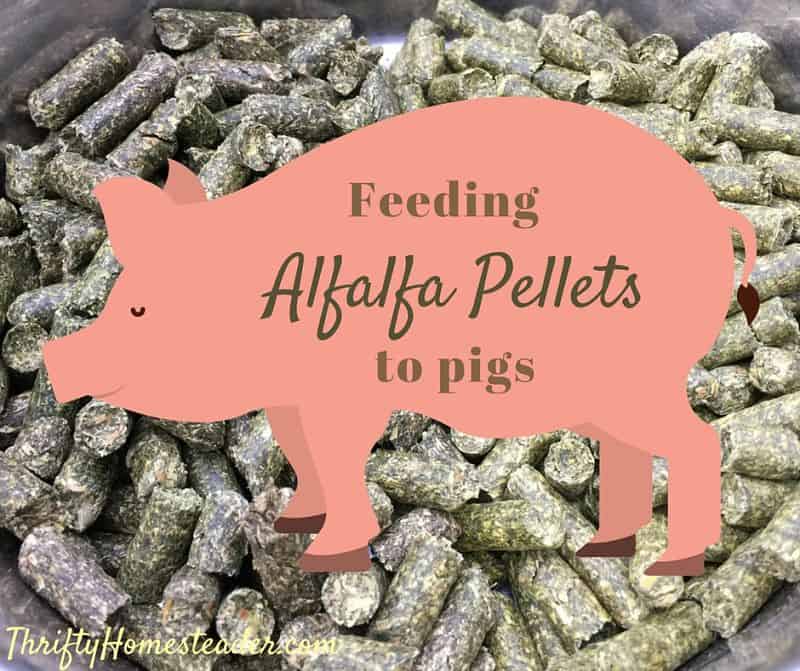 In modern agriculture, pigs are fed a diet of mainly grains, but heritage pigs love grass, and our American Guinea Hogs are no exception. In winter, we used to feed them hay, but they wasted it terribly! If you think goats are wasteful, try pigs! You can’t use a hay feeder with pigs. You have to put it on the ground because their mouths are below their snouts, and they leave behind a lot of hay to compost.

A couple of years ago, we started feeding them alfalfa pellets. I admit it was not because I was so brilliant. It was totally out of necessity because it was late winter, and we were running out of hay. It became obvious our hay supply would not last until spring grasses were tall enough for grazing, so I took some of the goat’s alfalfa pellets and mixed them with the pigs’ brew grain and pig feed. The pigs left the pellets behind and ate around them as they scarfed up the grains. Knowing that they loved alfalfa, I figured it was the hard pellets that had turned them off, so we started soaking it.

We fill a bucket half to two-thirds full with alfalfa pellets and then cover it with water by about an inch and let it soak for at least half an hour. The pellets fall apart and swell up a little, and we mix them into whatever else we are feeding the pigs that day, and they gobble up all of it. We no longer feed actual hay to the pigs during the winter, so even though the pellets cost more per pound, we are saving money because there is zero waste. This video shows you exactly how we do it.

Since this is alfalfa, you can feed them as much as they want because this is the salad bar for them during the winter. However, if you have Guinea Hogs, do keep an eye on their weight, and if they start to get fat, you need to feed less. They are extremely easy keepers! Also, if you are feeding this in winter, don’t put out more than they’ll eat before it freezes (because there is water in it now). I doubt pigs would be fond of frozen alfalfa pops.

If you have goats, be sure to check out the post I did last fall about feeding alfalfa pellets to goats, which we’ve been doing for more than ten years.

Even though Standlee Forage doesn’t advertise their pellets for pigs, they love the fact that some of us are feeding them to our little porkers. I love their products so much that I became a brand ambassador for them in 2017 after buying and feeding their products to my goats for about ten years. When this post was originally published, they gave away a bag of alfalfa pellets to one of my readers. 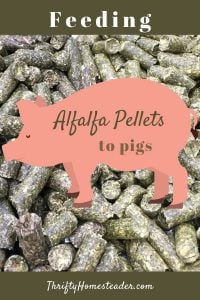 Thrifty Homesteader is a participant in the Amazon Services LLC Associates Program, an affiliate advertising program designed to provide a means for sites to earn advertising fees by advertising and linking to amazon.com. You pay the same price when you purchase through affiliate links as you would if you went directly to Amazon, and our site earns a small commission, so by shopping through our links, you are helping to support our blog so that we can continue to provide you with free content.
374 shares
374 shares