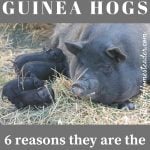 If you’ve decided to add pigs to your homestead, the next question is, “which breed?” I am partial to the heritage breeds because they do well on pasture. Initially we raised Tamworths, which we purchased from a breeder in the spring. We’d raise them through the summer and butcher them in the fall. For a variety of reasons, I decided I wanted to start breeding my own pigs, although I was very intimidated by the size of full-grown Tamworths and other breeds of pigs that I’d met.

Introducing … the American Guinea Hog! Its history is as mysterious as they come, but one thing is clear — it was the homestead hog of choice in the southeast U.S. during the 1800s. Less than a decade ago, it was almost completely extinct with less than 150 breeding animals known to exist! Today it is enjoying renewed popularity, and its numbers have been rapidly growing over the past few years. Why?

When we raised Tamworths, a lot of people would only want half a hog because they couldn’t wrap their brain around the idea of having 175 or 200 pounds of pork! With the AGH dressing out at half that amount, the number of customers is greater.

Of course, the four reasons I gave for having pigs on the homestead a couple of weeks ago is also true for the AGH. That means there is a total of ten reasons to have American Guinea Hogs on your homestead!

With the number of registered AGH in the US now well over a thousand it is much easier than it was a few years ago to find breeding stock, although if you are just planning to raise them for meat, you don’t have to buy registered pigs. And if there are not any in your area, piglets can be shipped by air just like dogs and cats, so you can find a breeder in another state and have the pigs shipped to you. Since you are charged by weight or kennel size (depending upon airline), it’s a good idea to buy pigs that have just been weaned, so you can save on shipping costs.

If you are interested in getting started with AGH, check out the Breeder’s Directory on the website of the American Guinea Hog Association.

Thrifty Homesteader is a participant in the Amazon Services LLC Associates Program, an affiliate advertising program designed to provide a means for sites to earn advertising fees by advertising and linking to amazon.com. You pay the same price when you purchase through affiliate links as you would if you went directly to Amazon, and our site earns a small commission, so by shopping through our links, you are helping to support our blog so that we can continue to provide you with free content.
2130 shares
2130 shares