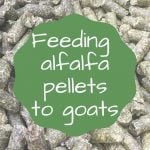 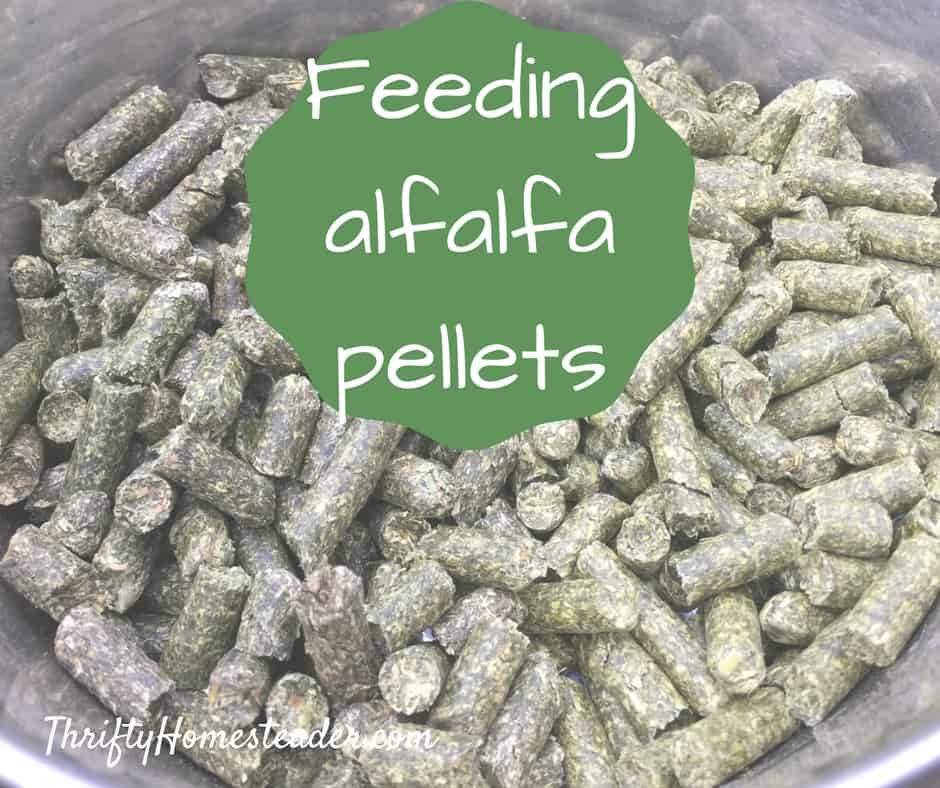 We started using alfalfa pellets years ago when we had goats that could finish all their grain faster than we could milk them. If goats get too much grain, they’ll get diarrhea and a host of other health problems. And some goats are grain hogs. They don’t chew. Not kidding here. They just slurp up the grain like a five-year-old eating ice cream. Of course, goats are going to upchuck it all in a little while and chew it again, so I suppose that’s why they think they don’t need to chew the first go round.

You can’t slow down a goat that eats too fast, but you can make the situation less dangerous for them by mixing in non-grain feeds, such as the crumbs that fall off the bales of alfalfa. Milking does can have all the alfalfa they want. But if you have more than a couple of goats, you won’t have enough crumbs. That’s where alfalfa pellets come in. For years, I’ve also been recommending them to others who have trouble getting their goats milked before the does finish their grain and start to protest about being on the milk stand.

Alfalfa is about 16 percent protein, sometimes more, so it has as much protein in it as most commercial goat feeds. It is also very high in calcium, which is great for milk production. Alfalfa has a 15:1 calcium to phosphorus ratio, which makes it a perfect complement to grain, which is high in phosphorus. 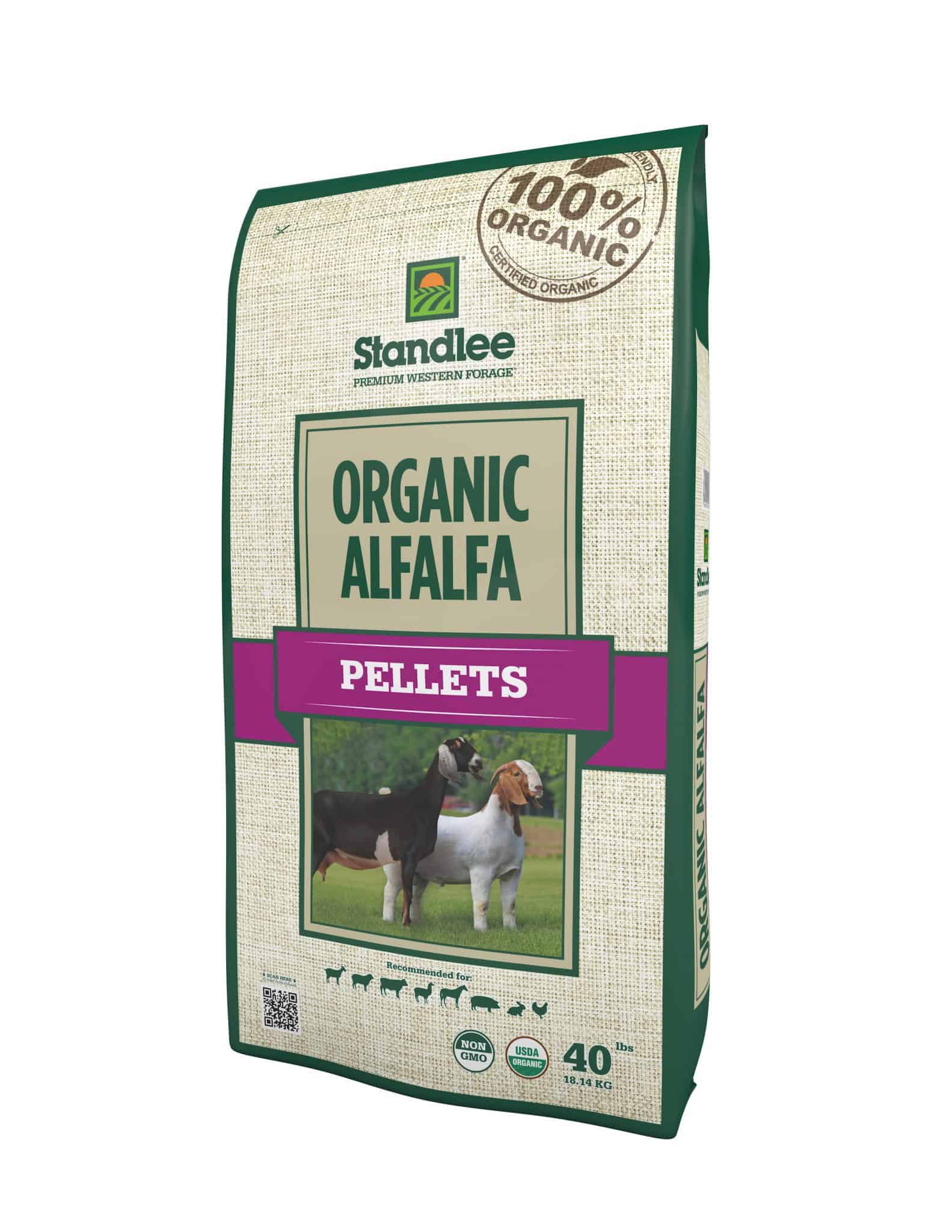 When Standlee approached me earlier this year and asked if I’d like to be a brand ambassador for them, it was an easy yes because I’d been using and recommending their product for more than ten years. And I was especially excited to hear that they were coming out with organic alfalfa pellets, especially with goats in mind. Because most of us with goats are consuming the milk and/or meat, we’re concerned about what they eat. I can’t even find organic alfalfa hay in my area, so this definitely fills a void.

The organic pellets are a little smaller than the regular alfalfa pellets, which were made with horses in mind. Goats are smaller, and have smaller teeth, so it’s a little easier for them to eat pellets that are smaller. In the title photo, I have the regular alfalfa pellets on the left, which are 1/4 inch, and the organic pellets are on the right, which are 5/32 inch in diameter.

We also feed alfalfa pellets to our American Guinea Hogs when they don’t have access to fresh pasture. Everyone talks about how goats waste hay, but pigs are even worse. They can’t use a hay feeder, so you have to feed hay on the ground, and a good bit of it gets scattered everywhere and wasted. Even though alfalfa pellets generally cost more than bales of hay, there is zero waste with the pellets. Just as we mix the pellets into the grain for the goats, we also mix it with the pigs’ grain.

Join me in the milking parlor in this video as I explain how we use alfalfa pellets with does on the milk stand.

I received so many questions on that first video that I decided to do a second one to respond …
And this is how I soak pellets before feeding them to our pigs: Do you know how pellets are different than cubes or hay? Check out Alfalfa Pellets vs Cubes and Hay

And what’s the difference between alfalfa and grass hay? Check out my post. 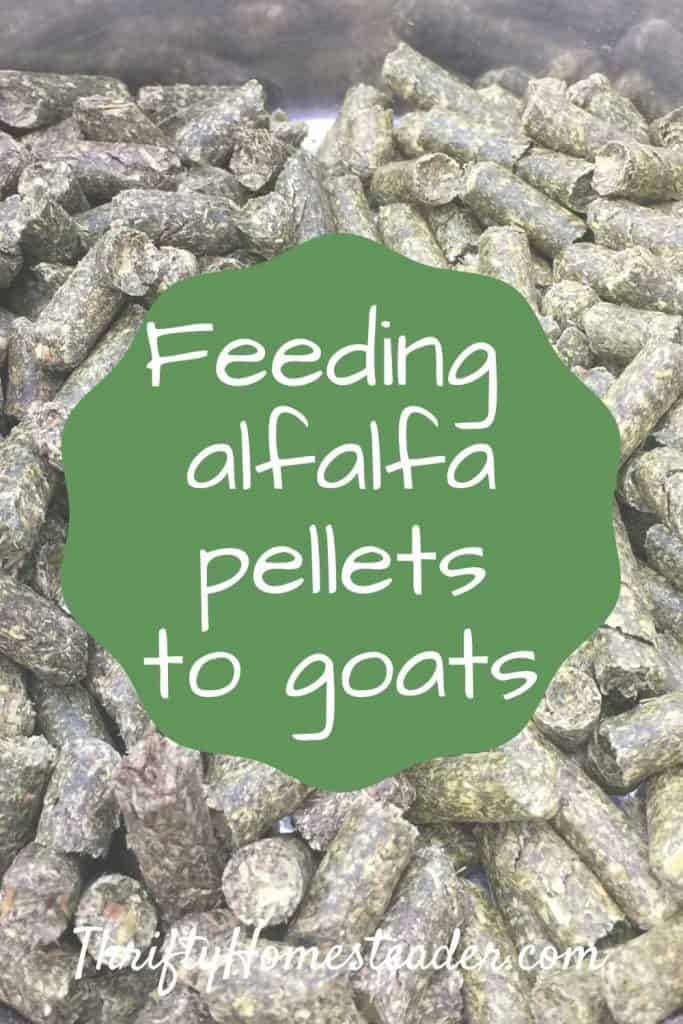 Thrifty Homesteader is a participant in the Amazon Services LLC Associates Program, an affiliate advertising program designed to provide a means for sites to earn advertising fees by advertising and linking to amazon.com. You pay the same price when you purchase through affiliate links as you would if you went directly to Amazon, and our site earns a small commission, so by shopping through our links, you are helping to support our blog so that we can continue to provide you with free content.
1327 shares
1327 shares