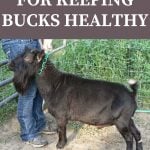 When you raise goats, it’s easy to forget that bucks have needs too. Since does are the ones producing the kids and the milk, it’s obvious that they need special attention. Because bucks are only producing sperm, it seems like their needs should be less than does, but that is not the case. And because bucks are stinky, most people don’t like handling them. So, it’s no surprise that bucks are often ignored beyond daily feeding and watering. But, just as with does, you will have more productive bucks if you make sure they have everything they need.

Although bucks don’t usually need grain or alfalfa, they won’t thrive on dried out brown grass hay, and just as does would get sick when fed moldy hay, so will bucks. But what do bucks need beyond a good grass hay or pasture and browse?

They need supplemental minerals that they can’t get from their environment, which means they should have a free choice, loose mineral mix available. Why can’t they get it from their environment? Because goats in nature live in the desert or in mountains, not on the plains or the prairies. They are not naturally grazers. They are browsers, which means they would normally eat small bushes and woody perennials, not grass. Be sure to get a mineral mix that is specifically labeled for goats only — not sheep and goats. If it is also labeled for sheep, it will not have enough copper in it for goats. And it should be a loose mineral, not a block, because goat tongues are not rough enough to get adequate nutrition from a block in most cases.

For more info on this subject, check out Goat Minerals: Why, What, and How

Even if you are giving bucks the best feed and supplemental minerals, you need to check their body condition at least once a month. That means putting your hands on them! Eeeyew! But because bucks usually have long hair, looks can be deceiving. We learned the hard way a long time ago that just because a buck looks good from a distance does not mean he is in great shape. Their long hair can hide a skinny frame. So, put your hands on them and be sure that they are not too skinny, which could indicate a parasite problem, such as worms or lice. Here is a great video on checking body condition in goats.

If their body condition is poor, and you are absolutely sure that there is not a parasite problem, they might simply need more feed or a better quality feed. If the quality of your pasture or hay is not ideal, you might need to supplement with a small amount of grain, in which case you should add some ammonium chloride to it to avoid urinary calculi.

In addition to checking the buck’s body condition, you also need to check his eyelids every month to be sure he isn’t anemic. The main cause of anemia in goats is an over-abundance of the barber pole worm, which is an intestinal parasite that sucks the goat’s blood, making it anemic and eventually killing it. The eyelids should be bright pink or red. If it is light pink or white, the goat is anemic. Treating the goat for intestinal parasites generally remedies the problem. However, a copper deficiency can manifest as anemia, so if the goat does not have a heavy load of parasites, but is anemic, copper deficiency is a possibility.

Pay attention to the buck’s coat

Why would you care about a buck’s coat if you aren’t showing your goats? Because it’s a great indicator of nutritional problems. If a red goat starts turning tan, a cream goat starts to look white, or a black goat looks red (pictured at right), it could be due to a copper deficiency. Now you’re probably wondering how a goat could be copper deficient if you’re giving them a supplemental mineral. If you have well water with high sulfur or iron, those minerals bind with the copper and make it unavailable to the goat, so you will need to supplement with copper oxide wire particles. Another sign of copper deficiency is a forked tail, which some people call a fish tail, as well as a goat that is slow to shed its winter coat in the spring. Don’t be fooled into thinking this is just a cosmetic problem! Ultimately a buck that is copper deficient will have fertility problems, so he won’t be able to do the one job he needs to do. To learn more about copper deficiency, check out my free online course.

Finally, it’s important to check your buck’s hooves regularly and trim them as needed. This will mean every two to three months for most bucks, but some will need it monthly, and others may only need it once or twice a year. Again, this is not just a cosmetic issue. If hooves get overgrown, they can wind up with hoof rot or other problems, making it difficult for a buck to mount does and get them pregnant.

Every three to four months, we have a buck spa day, which started as simply pedicure day. The goats didn’t seem too excited about having their hooves trimmed, so I thought they might like it more if we referred to it as a pedicure. Who doesn’t love a pedicure? For the record, it did not appear to change their opinion of the whole thing. Over the years, we realized this was also the perfect time to check eyelids and body condition, as well as give them the supplemental COWP while they’re on the milk stand. They eat grain and alfalfa pellets top-dressed with copper while we trim their hooves give them a pedicure. Once the hoof trimming pedicure is done, we check eyelids and body condition, and give a dewormer, if necessary.

What about parasite control?

You may be surprised that routine deworming is not on this list. Regular use of a dewormer was common practice during the 1990s and early 2000s, but recent research has shown that it’s a bad idea because it ultimately leads to dewormer resistance, which means that at some point, you are likely to find yourself in a situation where dewormers no longer work. For more information on dewormer resistance, check out this post.

So, if you don’t regularly deworm the bucks, what do you do? Check eyelids and body condition, and if a goat is anemic and under-weight, it is advisable to use a dewormer on that goat. For more information on preventing parasite problems, check out this post.

Check out “Parasites in Goats”
A course to help you identify, solve, and prevent parasite problems

Now, if you’re thinking that this seems like a lot of work, don’t despair. It really isn’t, especially when you consider the fact that a healthy buck can produce dozens of kids in a single year. Wise breeders for decades have known that your bucks are half your herd, even if you only have a few. Be smart, and protect that investment in your herd’s future!

Do you know what a vet does in a breeding soundness exam? Check out episode #83 Buck Health and Breeding on my For the Love of Goats podcast.

Thrifty Homesteader is a participant in the Amazon Services LLC Associates Program, an affiliate advertising program designed to provide a means for sites to earn advertising fees by advertising and linking to amazon.com. You pay the same price when you purchase through affiliate links as you would if you went directly to Amazon, and our site earns a small commission, so by shopping through our links, you are helping to support our blog so that we can continue to provide you with free content.
637 shares
637 shares