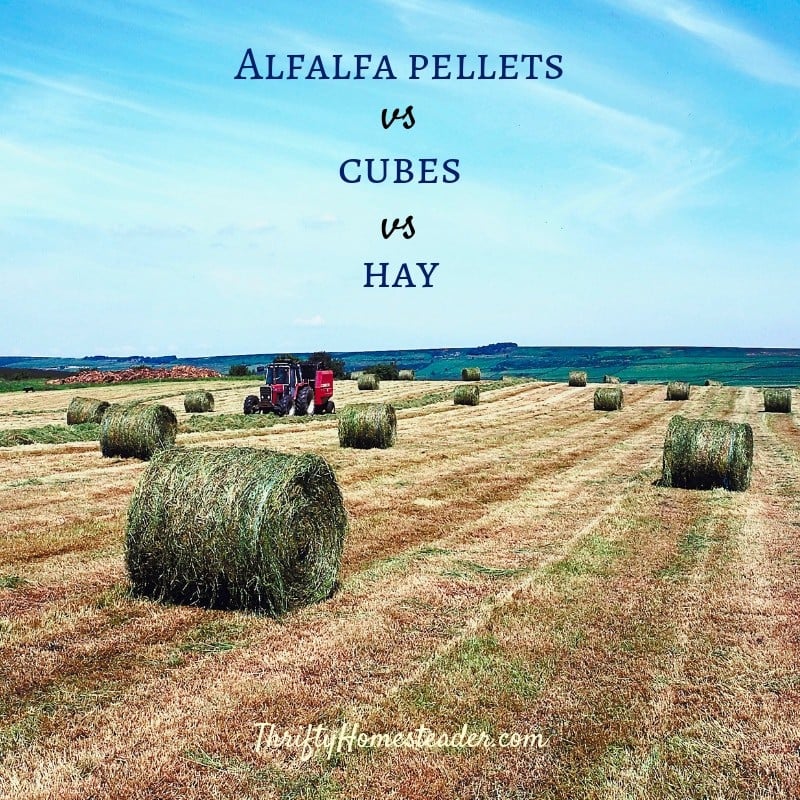 Even though I have written about feeding alfalfa pellets to goats, I still get a lot of questions about exactly how pellets are different than cubes or hay and how they should be used as part of a goat’s diet, as well as other livestock.

If you are asking about sheep, goats, and cattle, the answer is no. Ruminants cannot live on a diet of only alfalfa pellets. Ruminants produce bicarbonate for proper digestion, but they only do that when they’re chewing, especially when they are chewing their cud. The longer stemmed forage takes more chewing. So, if you only fed them pellets, which are pulverized hay, they would not have to chew much. If you give them cubes, they will have to chew a little more because it has not been chopped up quite as small as the hay in the pellets, but it would still not require anywhere near as much chewing as hay, pasture, and browse do.

If your animals are on pasture all day long, and you are just giving them something to munch on in the barn, then yes, you can give them pellets instead of hay because they’ve just spent all day eating things that required a lot of chewing.

Horses and pigs have a single stomach, so none of the above info applies to them. Feeding hay pellets, especially to senior horses with few teeth, is a viable option, especially if they are soaked in water first.

How much should I feed?

Since grain is also made into “pellets,” this can get confusing. But the nutritional content of hay pellets, cubes, and baled hay are all exactly the same. So, don’t confuse hay pellets with grain pellets. They have nothing in common with each other. You can feed the same number of pounds of pellets, cubes, and hay. Since you don’t need to limit most baled hay, there is not really a limit to how much pellets and cubes you can feed.

Grass pellets are also available. If we can’t get enough grass hay for our bucks for the winter, we buy the Standlee Timothy grass pellets for them. I give them a flake of hay twice a day to keep their rumen working and I supplement them with as much hay pellets as they will eat before losing interest. For my Nigerian dwarf bucks, that is usually between one to two cups each feeding. If I give them more than that, they get full and walk away before they are completely finished. (And then someone winds up peeing and pooping in the feed pan, which means the leftover pellets are now garbage.)

Cubes are made for horses and cattle, and because the hay has not been completely pulverized, it does require more chewing than pellets do. However, the cubes are too big and hard for goats and sheep to eat. When we sold our cattle and had half a bag of cubes left, I broke them apart into smaller pieces for the goats, but that is not something I would normally do. So, if you find yourself with some cubes, they can be used with sheep and goats with a little work, but the pellets are definitely easier to use with them.

Which should you choose?

I like to keep things as close to natural as possible, which means feeding baled hay. It is the closest thing to animals eating directly from the pasture, and it provides the long-stemmed forage that ruminants need to keep their rumen working properly. However, we don’t live in a perfect world. I live in the middle of corn and soybean country, and not that many farmers grow hay. Rarely am I able to get all of the alfalfa and grass hay that I need to last me all winter. That’s why I started using Standlee hay pellets as soon as they started selling them in my area more than ten years ago.

People with physical challenges may also prefer to avoid baled hay. If you’ve read my book, Raising Goats Naturally, you may recall the story of a woman who lives in Texas who feeds only hay pellets for nine months a year. She said, “I started feeding alfalfa pellets as I hit my 40s. I had always hauled and stacked my own hay, and sold a lot also. I was trying to pitch some heavy bales of alfalfa up to the sixth level when the whole side of the pile fell down, pinning me to the ground in the 90+ºF and 90 percent humidity.” However, keep in mind that her goats have access to pasture and browse, so they are able to keep their rumen healthy with a lot of leaves, pine needles, twigs, and other natural delicacies. 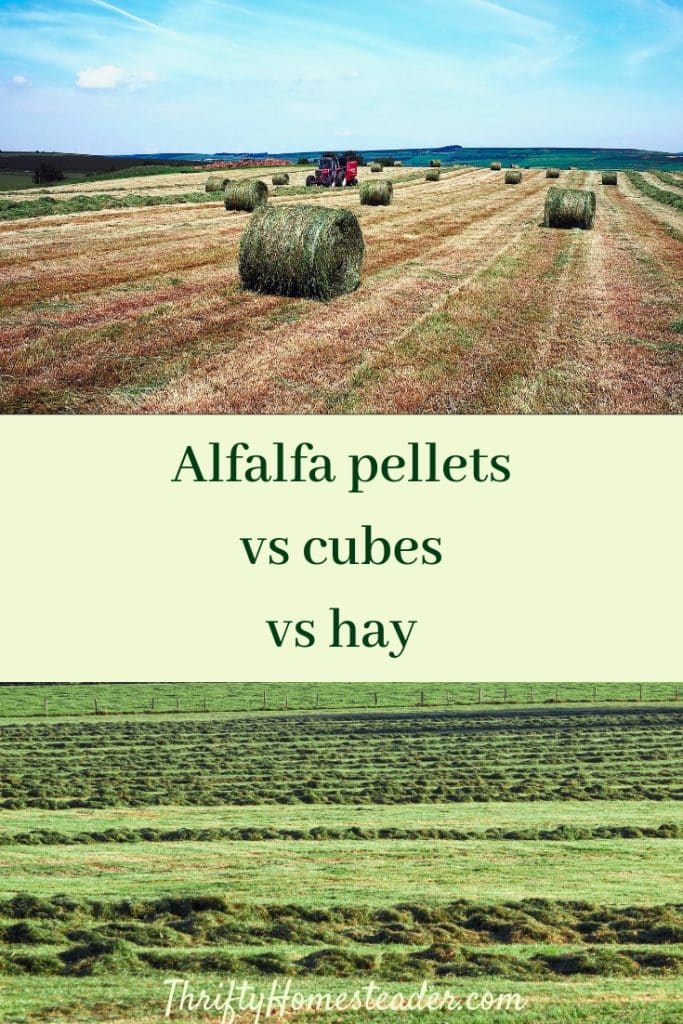 A year and a half ago I became a brand ambassador for Standlee because I’ve been using and loving and recommending their products for more than ten years already. I decided to write this post because at least once a week I wind up explaining all of this to someone, so now I can just give them a link to this post.

55 thoughts on “Alfalfa pellets vs cubes and hay”

Thrifty Homesteader is a participant in the Amazon Services LLC Associates Program, an affiliate advertising program designed to provide a means for sites to earn advertising fees by advertising and linking to amazon.com. You pay the same price when you purchase through affiliate links as you would if you went directly to Amazon, and our site earns a small commission, so by shopping through our links, you are helping to support our blog so that we can continue to provide you with free content.
690 shares
690 shares