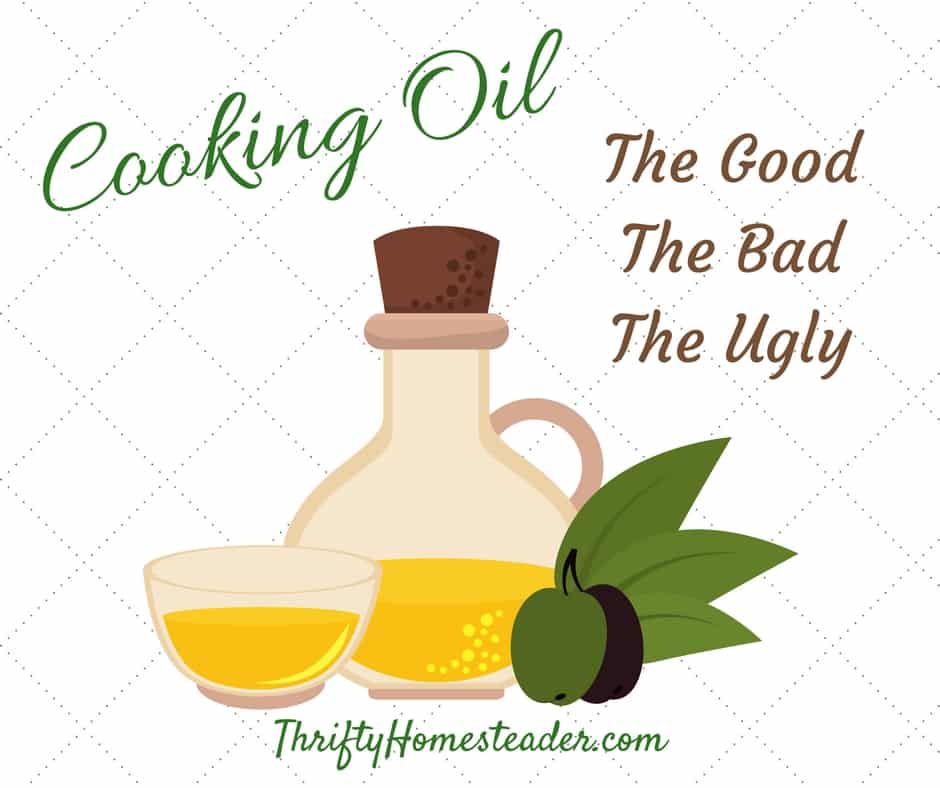 After growing all of your wonderful meat and vegetables, you don’t want to make it unhealthy by using the wrong kind of cooking oil. It wasn’t that long ago that they were telling us that all fats were the enemy, and we should all be consuming as little of it as possible. In fact, a few people are still saying that. However, we now know that not all fats are created equal. Some are actually good for us.

If you ask anyone what’s the best cooking oil in terms of health, almost all would say olive oil. In fact, eating plenty of olive oil is why many people think the Mediterranean diet is so healthy.

Olive oil is made up of 73% monounsaturated fats, which is the best fat for our bodies. It lowers our LDL cholesterol and is anti-inflammatory. So, why don’t we all cook with olive oil all the time? Because it does not handle high heat well. It starts smoking at a fairly low temperature, so it’s best used in sauces or in salad dressing, not for frying, although a light sauté is fine. (I buy this olive oil.)

Lard is my go-to oil for frying. It handles high heat just fine, and before you panic about it being unhealthy, let me add that I am only talking about home-rendered lard from pasture raised pigs.

Most of the lard in the store is hydrogenated, which turns it into a transfat, which is the worst kind of fat. Real lard is actually 50% monounsaturated.

Although canola oil is 60% monounsaturated, I prefer lard because canola is high in omega-6 at 24%, while lard is only 10% omega-6. (Plus, canola is genetically modified unless you’re buying organic.)

Most of us get about ten times more omega-6 than we should while not getting enough omega-3. Pasture-raised pigs have much more omega-3 than conventionally raised, which have none because they’re eating grains that are high in omega-6. So when I say pasture-raised I mean that they are in a pasture eating grass and other greens in addition to grain. If you simply have them outside and are feeding a diet of all grains, then their fat will be high in omega-6 just like confined pigs. Basically the more grain an animal eats, the more omega-6 that’s in their fat. (Yeah, that means chicken fat is really bad.)

Coconut oil is another oil that has been unjustly demonized. Like lard, coconut oil was also homogenized for commercial use, which is where most of the bad research comes from on this oil. Both fats have a low melt point, which gets messy in warm weather. Since I use only organic coconut oil, it’s pure liquid on a warm summer day. So, I am definitely not recommending homogenized coconut oil because it has transfats, which are unhealthy.

Even though coconut oil is mostly saturated fats, it is 64% medium-chain fatty acids, which do not produce as many calories as longer chain and are not deposited in fatty tissue. (I buy this organic, virgin coconut oil, which means it tastes a little like coconut. If you want a neutral flavor, buy refined.) 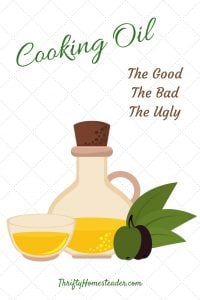 Although I used to use them, after I became certified as a health coach, I quit using polyunsaturated oils, such as safflower and sunflower oil.

Safflower is 79% omega-6, and sunflower is 69% omega-6, and we all consume way too much omega-6, which leads to inflammation, which is the the root of all disease from Alzheimer’s and arthritis to cancer and a long list of auto-immune diseases.

We should only be consuming about twice as much omega-6 as omega-3, and most of us are consuming about ten times as much! There are no cooking oils that contain omega-3 other than fat from pastured animals, which is why I don’t have any omega-3 cooking oils in my “Good” list other than lard — it’s the only cooking oil that has any omega-3 in it. Omega-3 is in wild-caught salmon, flax seed, chia seeds, and eggs of chickens fed flax seeds.

On my “never” list of oils are conventional soybean, corn, canola, and cottonseed — in other words, “vegetable” oils. Unless you are buying organic, all of these oils come from genetically-modified plants. Although there is still a lot of debate about the safety of the plants themselves, there is a lot of evidence that the weedkiller sprayed on those plants is a carcinogen and causes problems in the digestive tract, which can lead to other health problems. These oils are also high in omega-6, whose faults I’ve already discussed in the bad oil section.

This post contains affiliate links, which means that if you purchase something after clicking the link, we will get a small commission while you pay exactly the same price as you otherwise would.

2 thoughts on “Cooking Oil: The Good, the Bad, and the Ugly”

Thrifty Homesteader is a participant in the Amazon Services LLC Associates Program, an affiliate advertising program designed to provide a means for sites to earn advertising fees by advertising and linking to amazon.com. You pay the same price when you purchase through affiliate links as you would if you went directly to Amazon, and our site earns a small commission, so by shopping through our links, you are helping to support our blog so that we can continue to provide you with free content.
237 shares
237 shares