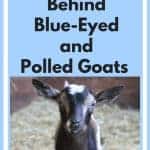 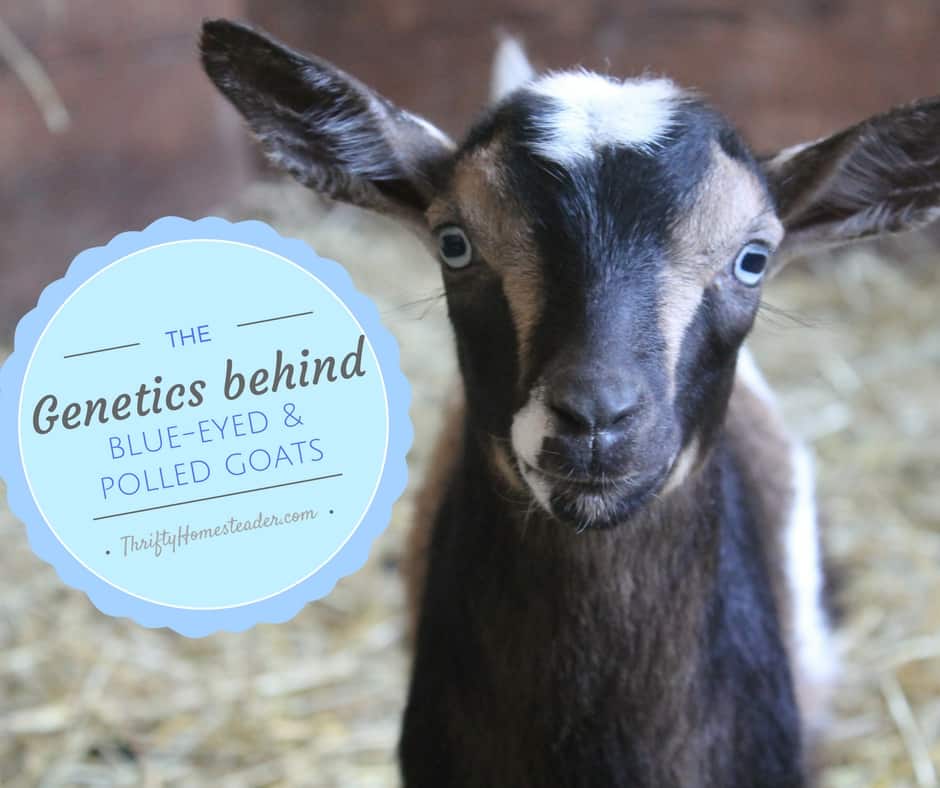 The genetics behind what causes a goat to be polled or blue-eyed is one of the most misunderstood phenomena in the goat world. It starts with a simple misunderstanding of what dominant and recessive mean when we’re talking about genes. A lot of people think that recessive equals rare, and that dominant means that if a goat has the gene, their kids will have it. In other words, they think that 100% of offspring will have a dominant trait. Those definitions are incorrect, but that explains why some people say that blue eyes and polled genes are recessive. They are, in fact, dominant in goats. Here is the definition of dominant, according to MedicineNet.com:

Dominant — A genetic trait is considered dominant if it is expressed in a person who has only one copy of that gene. A dominant trait is opposed to a recessive trait which is expressed only when two copies of the gene are present.

In other words, if a goat has a dominant gene, that gene will be expressed. So, if a goat has a gene for polled or blue eyes, that goat will be polled or blue-eyed. A goat cannot be a carrier of a dominant gene if it does not express that gene. So, if you see an ad for a horned or disbudded goat that “carries” the polled gene, the seller is either misinformed or dishonest.

Horns and brown eyes are recessive

I don’t normally say “never,” but … Two brown-eyed goats will not have blue-eyed kids. Two horned goats will not have a polled kid. Once in awhile you will hear that two disbudded goats had a polled offspring, but it’s pretty well accepted that when that happens, it points to human error. If one of the grandparents is not polled, it could mean that the breeding records are incorrect, and a polled buck bred the doe. But if one of the grandparents is polled, it means that the person who disbudded one of those parents made a mistake.

If you raise polled goats, you know that some kids can keep you guessing about their horned status for a week or two — sometimes even three or four weeks with does. Bucks are pretty easy because if they’re horned, you can normally feel the horn buds at birth. We have only had one horned buckling whose horn buds were not obvious at birth. I don’t think we have ever accidentally disbudded a polled goat, but it’s easy to see how someone could do that, especially when they’re new.

On the flip side, because horns and brown eyes are recessive, there is a 25% chance of having a brown-eyed kid from two blue-eyed parents. There is also a 25% chance of having a horned kid from two polled parents. This is assuming that the parents are heterozygous. If one of the parents is homozygous for one of those traits, then all of their offspring will have that trait.

Each parent will give each kid one gene for eye color and horn status. Let’s use eye color in this example. If a parent has brown eyes, then it has two brown eyed genes, and it can only give each kid a gene for brown eyes. If a parent has blue eyes, and it had one brown eyed parent and one blue-eyed parent, then it is heterozygous for blue eyes. It can give its offspring either a blue-eyed or a brown-eyed gene, and each one happens about 50% of the time.

Why are polled goats less common than horned?

There were 1,362 kids in the 1964 study, so the number was quite significant. In the group where a homozygous polled buck was bred to a heterozygous polled female, 86 kids were male, 28 were female, and 26 were hermaphrodites. Even if you assume that the 26 hermaphrodites were originally females, it is still a lot less than 50% female, leading to the terminator theory. In other words, female embryos died. This turned off most people to the idea of polled goats — even though the studies clearly showed that breeding a polled goat to a horned goat had no such outcomes. In my early years of goat breeding, twice I came across older people who were switching from a larger breed to ND goats, and they were adamantly opposed to having any polled goats.

Unlike cattle and sheep, where you can find entire breeds of polled animals, there are no polled breeds of goats. In fact, there are no polled herds of goats. However, as more new people get involved in goat breeding, and they hate the idea of disbudding, polled goats are becoming popular once again. There have even been groups on social media, such as Yahoo and Facebook, where determined breeders are breeding polled to polled goats and reporting their results. The challenge with polled goats is that the location of the polled gene is very close to the gene for the determination of sex, so although the number of polled goats could certainly increase drastically, it’s unlikely that polled goats will ever become more common than horned. 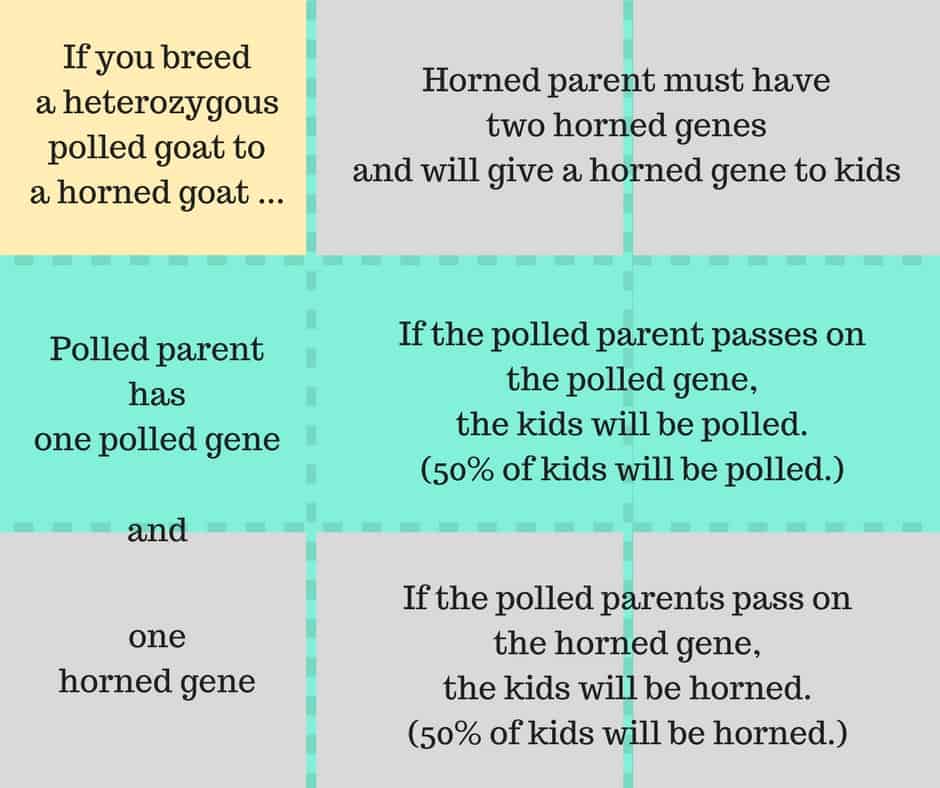 Keep in mind that when you are talking about odds, 50/50 does not mean that every other goat will have horns. Over the long haul, you will get 50% polled goats if one of the parents is polled. But you will have some years with more or less than that. One year I had a doe that gave birth to quads, and they were all polled. Another year, I had a polled buck that sired nine kids, and every one of them was horned. Believe me, we were really starting to second guess ourselves towards the end! But the next year he made it up for with more than 50% polled kids.

Hopefully, this explanation — and the charts — have helped to shed some light on this topic and clear up some misconceptions.

For more information, you can also check out the website for the American Goat Society, which also has an explanation of the polled gene in goats. 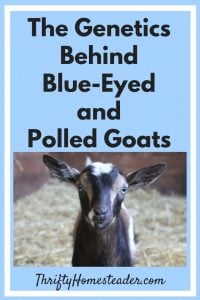 61 thoughts on “The genetics behind blue-eyed and polled goats”

Thrifty Homesteader is a participant in the Amazon Services LLC Associates Program, an affiliate advertising program designed to provide a means for sites to earn advertising fees by advertising and linking to amazon.com. You pay the same price when you purchase through affiliate links as you would if you went directly to Amazon, and our site earns a small commission, so by shopping through our links, you are helping to support our blog so that we can continue to provide you with free content.
2946 shares
2946 shares