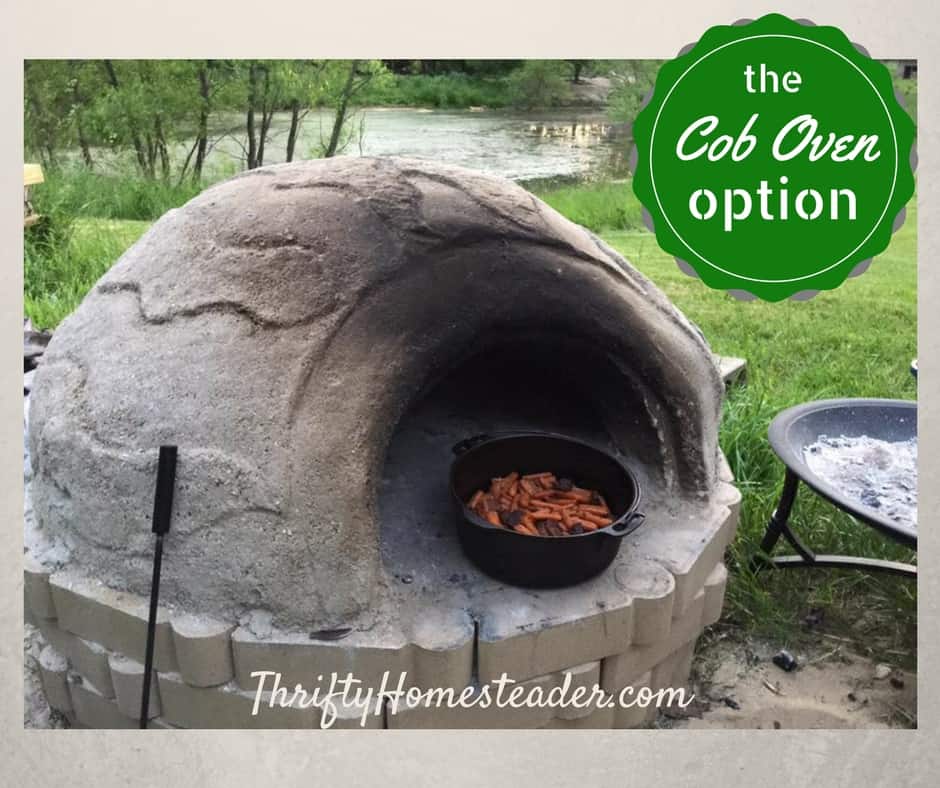 Because we don’t have central air conditioning, we try to keep our house naturally cool during the summer. That means we cook indoors as little as possible. Through the years, we’ve used a modern grill on our deck and then we added a solar oven. Ultimately we built a cob oven. The main thing I love about having a cob oven is that it gets us one step closer to self-reliance. There is no electric or gas bill associated with us using it. The wood comes from our farm.

Cob is a traditional building material made of clay, sand, and straw. It creates a thermal mass, which absorbs heat from the fire, then stays hot for several hours. It doesn’t have a chimney, as the smoke billows out the door. After the fire has been going for a couple of hours, the coals are traditionally raked out. The door is placed on the oven to let the heat equalize for a few minutes, then we place the food in the oven for cooking. The temperature is usually in the upper 300s, although it has been more than 400 a couple of times. Sometimes, instead of raking the coals out, we simply push them to the side if we want our food to taste smoky. Since we have hickory trees on our farm, we use the hickory wood so that we can have real hickory smoked chicken or ham.

The base of the oven was built on a concrete pad. We created a ring of bricks and then filled the open space with empty bottles. Then we filled the space between the bottles with sand. We covered the sand with a layer of clay, which created the oven floor. The bottles insulate the oven from the earth, so the oven will stay hot longer.

To create the cavity that will be the inside of the oven, we created a large mound of sand, which was later pulled out when the dome of the oven was hardened. The dome is made of three layers. The first layer is a mixture of sand and clay. The second layer contains empty glass bottles for insulation, with sand and clay between them. The top layer is clay, sand, and sawdust. After it dried, and we’d used the oven for a few months, we added a layer of lime plaster with fabric dye for decoration. The oven needs to be protected from hard rain at all times. For now, we put a tarp over it when it’s not in use, but eventually we plan to build a shelter with a roof over it. This will also make it nicer for us to use it when it’s raining or extremely hot and sunny. 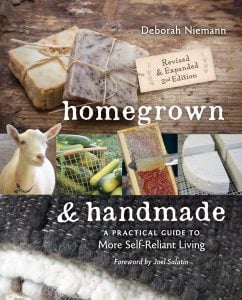 This is an excerpt from the second edition of Homegrown and Handmade: A Practical Guide to More Self-Reliant Living.

6 thoughts on “Cob ovens: a sustainable option for summer baking”

Thrifty Homesteader is a participant in the Amazon Services LLC Associates Program, an affiliate advertising program designed to provide a means for sites to earn advertising fees by advertising and linking to amazon.com. You pay the same price when you purchase through affiliate links as you would if you went directly to Amazon, and our site earns a small commission, so by shopping through our links, you are helping to support our blog so that we can continue to provide you with free content.
1076 shares
1076 shares