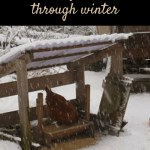 We have raised laying ducks for nearly six years now, and one of the things we are asked about most frequently is how to care for ducks in the wintertime.

We live in the foothills of Washington State’s Olympic Mountains, at an elevation of 1000 feet. We get a fair amount of snow each winter, sometimes being snowed in for a week or more at a time. Most commonly our low temperatures are in the teens and twenties between late November and mid-March.

Currently we have a laying duck flock of about 30 Khaki Campbells. We started out with Khaki Campbells and Blue Swedish ducks, both of which are quite cold-hardy.

While most ducks do well in cold weather, it’s a good idea to choose a type known to be hardy in your particular climate. Other things to keep in mind about keeping ducks in the winter are similar to considerations for other poultry types: housing, feed and water. Let’s look at each of these.

First, housing and shelter. While ducks are very hardy, they do need shelter from the weather. They don’t mind being out in the rain, but high winds, sleet and ice storms, and heavy snowfall are very stressful for ducks.

Our ducks are out on pasture during the day, but they all go into their respective coops at night. They often sleep during the day, and they prefer to be under some kind of cover, such as under a car or a dense bush.

We’re often asked if it’s OK to leave ducks out on the pond to more or less fend for themselves. Sure, you can do that, but keep a few things in mind: Ducks are more vulnerable to predators, especially hawks and eagles, when they’re on a pond. If the pond freezes over, they won’t have access to as much food as usual.

And of course, if they have no coop or shelter, collecting their eggs will be very difficult. Because your ducks will be in their coops for longer hours at this time of year, it’s very important to keep the coops clean and dry. I toss in some fresh bedding at least every other day, and our smaller duck coops are cleaned out completely about twice a month.

Second, feed. Ducks have relatively short legs, so if your ducks free-range like ours, plan to help them a little when you have snow on the ground.

We have four feeding stations for our birds, and when there is more than about 4 inches of snow, we sweep or shovel paths between the coops and the feeding stations. A broom works well for this if the snow is dry.

Normally at this time of year, adult ducks are either still moulting or have recently finished their moult. It’s important to keep up the protein intake; feathers are about 85% protein, so your birds will benefit from extra protein while they grow out their new feathers. And although their egg-laying does slow down or stop during the winter, I recommend continuing to supplement their feed with extra calcium, such as crushed oyster shell.

When the weather is especially cold, we like to give our ducks a bedtime snack of cracked corn, about an hour or so before they head into the coops. This gives them an extra boost of carbohydrate, which helps provide extra body heat during the night.

Third, what about water? We all know how ducks love water, and not just during warm weather.

In addition to the 3-gallon drinkers, we have about 8 tubs of different sizes for the ducks to bathe and splash in. These range from plastic garbage-can lids to a 50-gallon livestock watering tank. The smaller ones get refilled at least once a day; the big tank is refilled every other day.

We live off the grid and don’t use electric water heaters, but I hear that they work well. When it gets cold enough here for the water in the tubs to freeze, we’ve found the best strategy is to simply empty them at night and refill them the next morning. Otherwise, we try to position the drinkers and tubs in the sun, and sometimes top them off with a little warm water during the day if temperatures stay below freezing.

One additional tip: Make sure you collect duck eggs promptly. Ducks lay most of their eggs during the night, so we pick up the eggs first thing in the morning, when we let them out. If there is adequate dry bedding in the coop, ducks like to bury their eggs; this helps protect them from the cold as well as hiding them from predators. Still, when the weather is very cold, the eggs can freeze, so pick them up early.

Victoria Redhed Miller is a writer, photographer and homesteader who lives off-grid on a 40-acre farm in the foothills of Washington’s Olympic Mountains with her husband David. As well as raising heritage chickens, turkeys and ducks, she works towards enhancing her family’s self-sufficiency through gardening, food preservation, craft brewing and distilling, antique repair and restoration, and other traditional skills. Victoria blogs about her experiences at Pot Pies and Egg Money and Canyon Creek Farms. She is the author of Pure Poultry: Living Well With Heritage Chickens, Turkeys and Ducks.

Thrifty Homesteader is a participant in the Amazon Services LLC Associates Program, an affiliate advertising program designed to provide a means for sites to earn advertising fees by advertising and linking to amazon.com. You pay the same price when you purchase through affiliate links as you would if you went directly to Amazon, and our site earns a small commission, so by shopping through our links, you are helping to support our blog so that we can continue to provide you with free content.
2406 shares
2406 shares